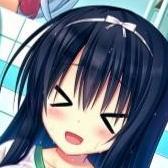 By Mikanmeister
May 8, 2018 in Recommendations