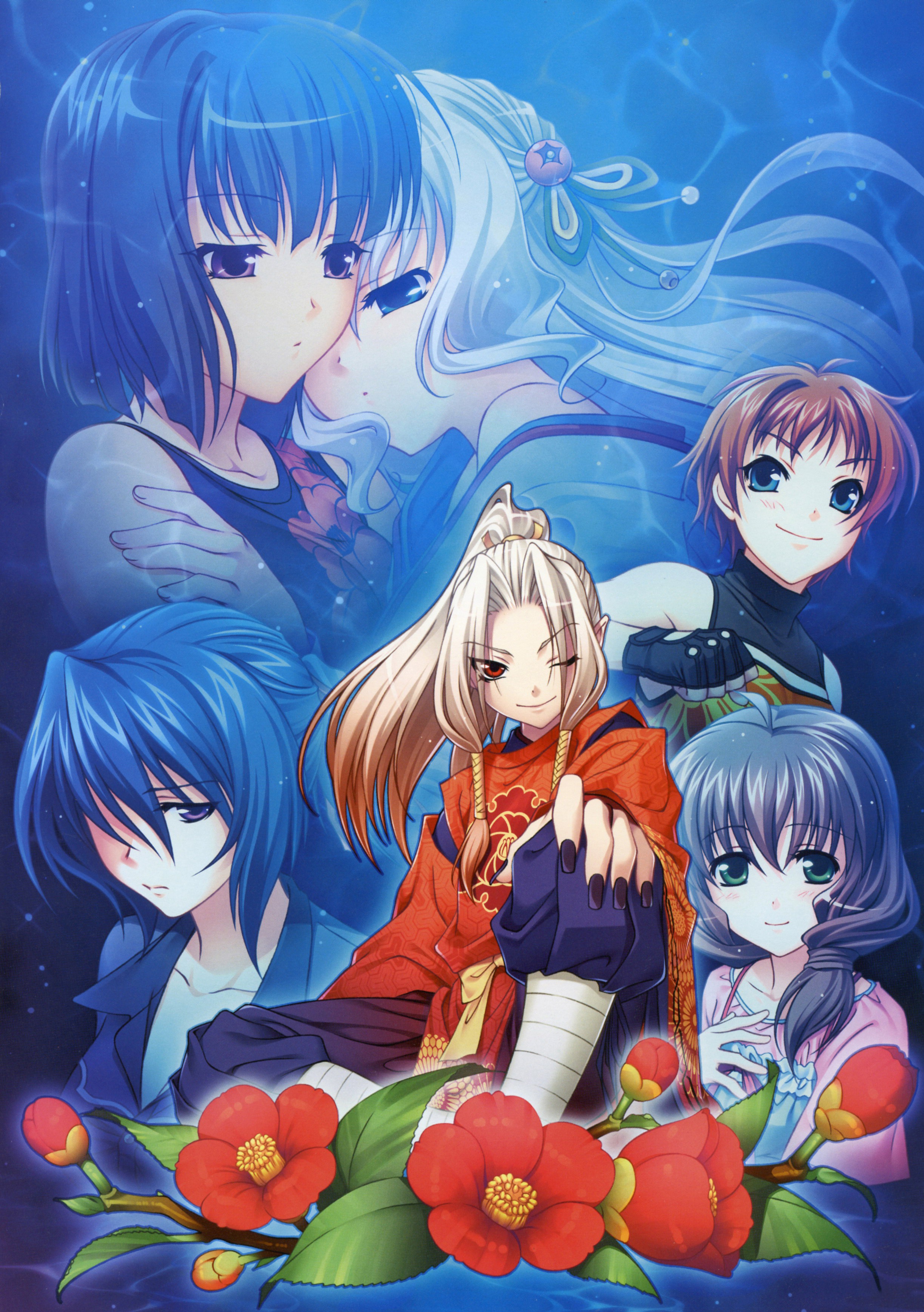 (Have you ever had it blue?)

Growing up I never did much with my summers. Other than the requisite family trips I spent most of my summers indoors engaged in watching TV or playing video games. I had no real desire to ever go to summer camp or anything like that. That might have been to my detriment now that I think about it. I could have had a wonderful time and forged some lasting relationships or some shit like that. Of course, if you want to go by horror movie logic I spared myself from being cut down by some ax wielding maniac, or subjected to some R.L. Stine twist. Thinking about it realistically, I probably just spared myself a few pen pals I would never write to, and the usual bug bites and poison ivy misadventures. I'll just pack that in the things that I regret not doing when I was young like playing the guitar, taking theater, and learning ventriloquism. For Osanai Shouko, it is doubtless that her summer camp trip will change her life forever, if she can survive it that is.

It's summertime and for second year Osanai or (Osa as she is normally called) that means it is time for the annual summer training camp with the rest of the Seijou Girls’ Academy Kendo Club. The location for the training camp is Shoushinji, a Buddhist Monastery that is famous for the island that is across from it Urashima. According to the lengthy prologue that is delivered to you in the beginning, Urashima was the location of a fabled battle with demons several hundred years ago. Being the dependable kendo club captain she is Osa is more concerned about the itinerary of the trip and how well the rest of the team performs than some old legend. Despite that, something about the monastery seems awfully familiar to her. It feels like has been there before somehow even though she is sure that this is her first time. Something relating to an event that occurred eight years ago, a event that she can barley recall. What does it all mean? The story in Aoishiro has competent mystery that is interesting enough that it held my attention throughout and kept me wanting to play. What Aoishiro can truly take pride in is a smorgasbord of intriguing and diverse characters that you encounter over the course of the story.

(Get ready to be familiar with this scene because these girls love to eat. )

This is truly Aoishiro's main selling point and it's something the Visual Novel truly excels in. Most notably one of the best characters happens to be the protagonist herself Osanai Shouko. She is a very dependable and grounded character and even though she is just human she can still hold her own when the proverbial shit hits the fan. It's very rare to find a truly great protagonist in a Visual Novel so I was quite delighted to find that in Osa. The rest of the cast are all extremely well developed as well and really add to the legend, and the story. They are all drawn to the monastery at the same time and at the same place because a storm is approaching, and a secret ritual is about to begin at Urashima. Some of these characters include,

Aizawa Yasumi: She is the manager of the kendo club and a very determined girl even though she doesn't have much stamina and gets weak pretty easily. I was a little bit leery of her initially as she reminded me of a certain dango obsessive character but she turned out to have quite a few surprises up her sleeve.

Kyan Migiwa: She is a strange girl that you meet in the beginning of the game at Shoushinji. She is not apart of the kendo club though she is the same age as Osa. Migiwa is initially very secretive about what she is doing at the temple, and why she insists on keeping watch over the forbidden stepping stones that are the only path to the island. She is very carefree and loves to tease and is consequently one of my favorite characters.

Nami: She is another mystery girl that literally washes up at the beach one night. She does not seem able to speak and her memory is gone as well. What a winning combination. She is strangely well adjusted despite that ludicrous setback.

Kohaku: The mystery girls keep appearing one after another! She is a small odd woman dressed in a very old outfit with one eye perpetually closed. Hm, I wonder what that could mean?

Secret Character: This very characters existence is a mystery!

Each of the main characters drastically change how the the story plays out and they give a very different insight into the events. Like many visual novels before it you have to play in a certain way to unlock all the heroines and the final grand route. Since they are all pretty great it was not much of a hassle. The grand route by itself is definitely worth unlocking since it is the route where Osa get's to truly shine. On top of that Aioshiro boasts a large cast of side characters which is a quite unusual but not unwelcome addition. They are,

Akita Momoko: An intensely energetic girl that is also a ravenous carnivore.

Sakurai Ayashiro: The Vice President of the kendo club and a very dignified lady from a rich family.

Aoi Hanako: The teacher and advisor to the club, she is a exposition monster and enjoys the odd drink.

And finally, Suzuki Yuukai the chief priest at Shoushinji and another of the exposition monsters. He is a big beer and kendo enthusiast.

(I don't know man moments like these just happen)

I truly enjoyed my time with Aoishiro even though my first few moments were agonizingly slow thanks to a bug. After I figured out the cause my experience greatly improved. That is not to say that my whole time with it was amazing. I was reminded a lot by Fate/Stay Night while I was playing both in a positive way and a negative way. On the positive side the production quality is through the roof. From the highly detailed visuals to the great voice acting and the wonderful soundtrack. This is coming from someone who almost always plays my own music while I play so you know the music has to be great. On the negative side there are quite a few characters who seem to take a sadistic pleasure in barraging you with copious amounts of info dumps on the lore and legends of the area. There is a supposedly handy in game dictionary but unfortunately that part of Aoishiro was untranslated. The amount of names and events eventually fused together in a impenetrable mush. I was not sure half the time what was traditional folklore and what was the in-game lore. I was able to get a handle on it eventually but it led to some tedium. Speaking of tedium there are numerous times where we are treated to lengthy feasting scenes. They all but grind the story to a halt though they do provide some nice character interaction. Thankfully after the first route is complete it is possible to skip through a lot of these scenes. Those were really my only real gripes with the game. Also like Fate there are also a lot of bad ends that you could unwittingly end up in if you aren't careful. It's more of a Shoujo Ai than a pure yuri game though there are quite a few suggestive moments. Aoishiro turned out to be very spectacular especially in the grand route that you unlock in the game. The strength of the protagonist and the rest of the cast, the visuals, the story and finally the music all come together in a cohesive whole. I really liked it is what I'm trying to say.