Koi to Senkyo to Chocolate: The Review

Yummy, Yummy, Yummy I got love in my tummy, and I feel like a-loving you

(From left to right; Satsuki, Michiru, Isara, Mifuyu, and Chisato)

Chocolate, it truly bridges the cultural divide and brings people together. There is not a person alive who has not at least heard of its existence. It's a world renown symbol of love and diabetes, and a advertisers dream. For Oojima Yuuki and his childhood friend Chisato it means so much more than just that. Can tragedy that is caused by chocolate be saved by chocolate? 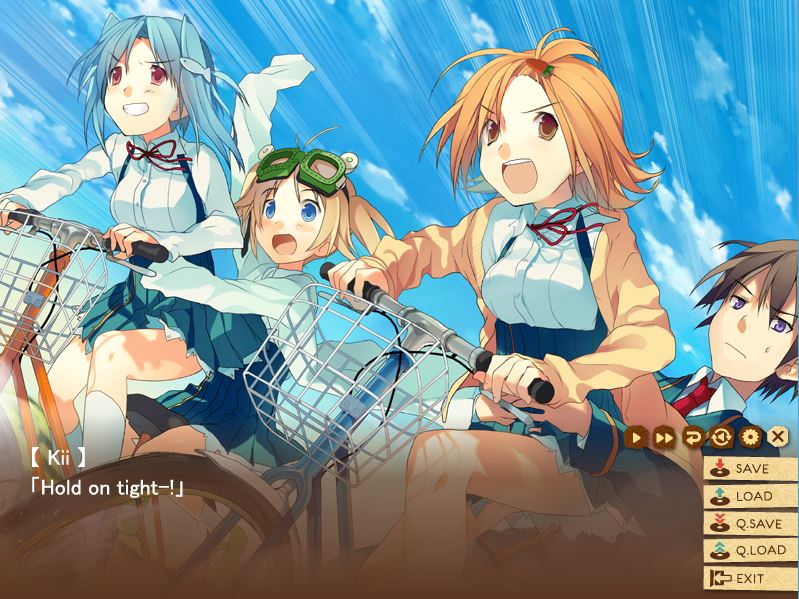 (Cue: Ride of the Valkyries)

Yuuki is a man who doesn't have much to ask for. All he wants is too finish out his remaining high school years at the preposterously exclusive Takafuji Gakuen Academy with the rest of his friends. Well that and for people to get his last name right for once. There they play out their lives in the Food Research Club otherwise known as Shokken! In that hollowed club room Yuuki and his friends, well they don't do much at all exactly. They pretty much us the club as an excuse to eat all the sweets they can get their hands on. It's presumed that the only thing he and his cohorts research is the amount of cavities they will develop. However, the dawn of a new school year brings fresh challenges that threaten Yuuki's peaceful existence. Student Council elections are on the horizon and with it the brazen and beautiful Satsuki Shinonome who threatens to bring down judgment like the wrath of God upon Shokken. As the head of the Financial Affairs Committee, she makes it her campaign goal to dramatically decrease the schools budget. In order to do that she decides to cut funds for clubs she deems to be undeserving and for a club as fundamentally useless as Shokken she threatens annihilation. Now, in order to protect the club and their remaining precious memories Yukki will have to become the peoples champion and throw his hat into the race. Will Yukki manage to do the impossible and protect the Shokken, or will he be swept aside by forces beyond his control? The idea for the story is pretty straightforward and simplistic but it serves as a strong enough foundation for the ensuing drama of each characters route. Oh, speaking of characters 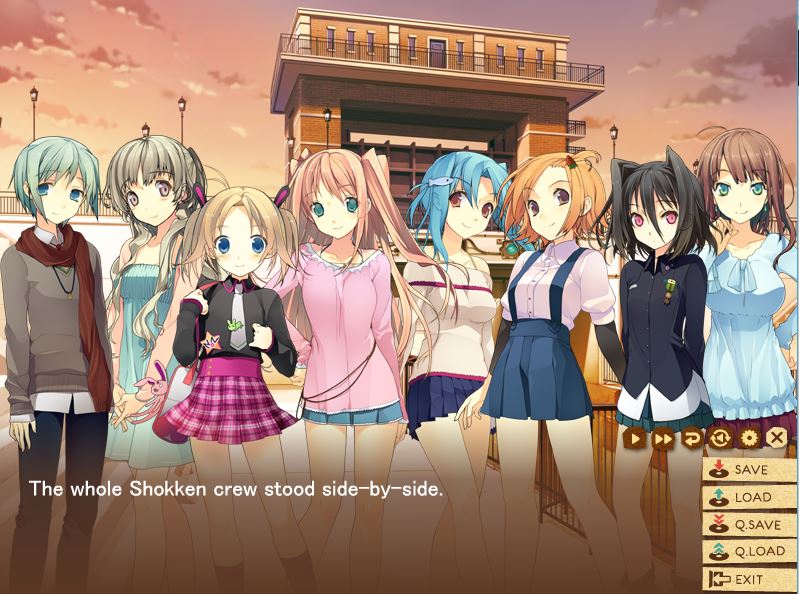 (Look at all of them, standing there, staring at you.)

First off is our protagonist Oojima Yuuki and he is one of the better developed leading men that I have encountered. Maybe that is because I also hate it when someone butchers my last name, even though it's so easy to say if you stop to think for one second! That, and I am also terrible about noticing whether or not a girl is interested in me or not. That did not stop me from wanting to strangle the life out of him on many occasions, but still I could sympathize. He is initially hesitant about becoming a candidate but he eventually rises to the occasion. Furthermore, you can actually see his face once or twice, that alone raises his stock.

Second is the resident main girl and childhood friend Chisato. She stuns locks us into her route from the very beginning and if you want to date any of the other girls you have to go through her first. That notion might turn off a few people but for me I didn't mind it too much. She is a incredibly important character and she effects every relationship that Yuuki is involved with. She is your typical tsundere character but even still she has quite a bit of depth to her. Coming into it I thought I would end up really disliking her, but surprisingly enough by the end of it I had a completely different opinion of her.

Next is Michiru who is a quiet cat like girl and the newest addition to the Shokken. Michiru was a character that I liked as soon as I met her. Maybe it had to do with the fact that she is rather mysterious and the quiet type. Her route is definitely the strangest one, and unfortunately it completely broke my suspension of disbelief. One thing is for certain it definitely has one of the more memorable harmonica tunes out there. She's also just super cute!

Mifuyu is up next and she is best friends with both Chisato and Yuuki. She was another character I was surprised that I ended up liking. Usually I'm not interested in characters that suffer from a vague malady, but I made an exception for Mifuyu. Her route was definitely one of my favorites of Koi and I liked how it really tested the three's friendship.

After that is Isara a hardworking girl with a brilliant smile who cutely ends nearly every single sentence with a little...aha! Or at least I think it was supposed to be cute. I tried it out a couple of times in front of the mirror and it didn't really sound cute at all...aha! Isara is from a poor family and is only able to attend Takafuji through some student welfare system. It's a very bizarre system that makes the students work in factories while they go to school. It also causes the students who are part of that system to be treated as second class citizens. Aha!

Last of all is Satsuki the head of the financial committee and the mortal enemy of the Shokken. I enjoyed her route the most out of all of them. The drama felt the most convincing and grounded. Satsuki and Yuuki seemed to really compliment each other and the romance felt very natural. She also has a cute side once you get under her aloof nature.

Aside from the heroines there is a surprisingly large cast of well developed side characters. Some of the standouts are Nozomi a brilliant mad scientist type of character, Hazuki the alcoholic teacher, Ai and Kii two life long friends otherwise known as the monkey duo, and Yume who has a strange and unsubtle fixation on Yuuki. 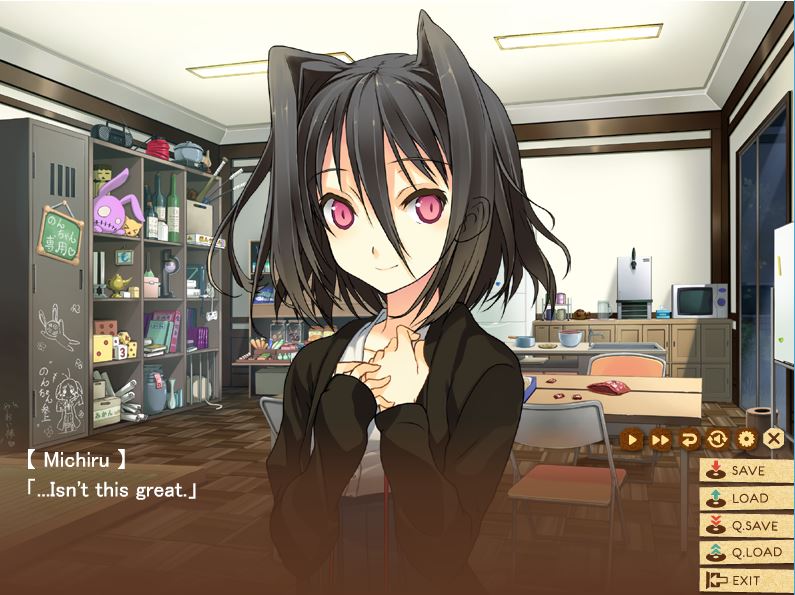 Koi to Senkyo to Chocolate, despite coming across as some kind of insidious advertisement for the chocolate industry was really enjoyable. The characters and their routes are all well developed and well written. On top of that the art was gorgeous throughout. I think a special mention should go to the way the backgrounds were handled I think they are some of the best I have ever seen. It is rare to see a visual novel that actually has characters in the background shots but that is what Sprite did. Normally you just have to imagine that the busy streetcorner or classroom is populated and in Koi's case a few of the background characters could have easily been side characters in their own right. On the negative side one thing that really stuck out to me is how absurd the Academy comes across as. It's this huge entity that has a student run school budget at a billion yen, has a department that involves spies and wiretaps, operates a broken welfare system for students who cannot afford to attend normally, and let's a teacher use a club room as a minibar. Two of the routes really seem to go off the deep end, and I was almost disappointed that Yuuki didn't uncover a assassination plot against him. It's the type of school that could suddenly reveal that it's secretly a covert military training base for supersolders and would hardly seem surprising. Because of that, I found it hard to take some of the dramatic moments seriously and that hurt some of my enjoyment. Ultimately, despite my pummeled suspension of disbelief I still had a good time with Koi to Senkyo to Chocolate, and I would encourage you to give it a chance even though you are forced to complete Chisato's route first. She is not that bad I swear! 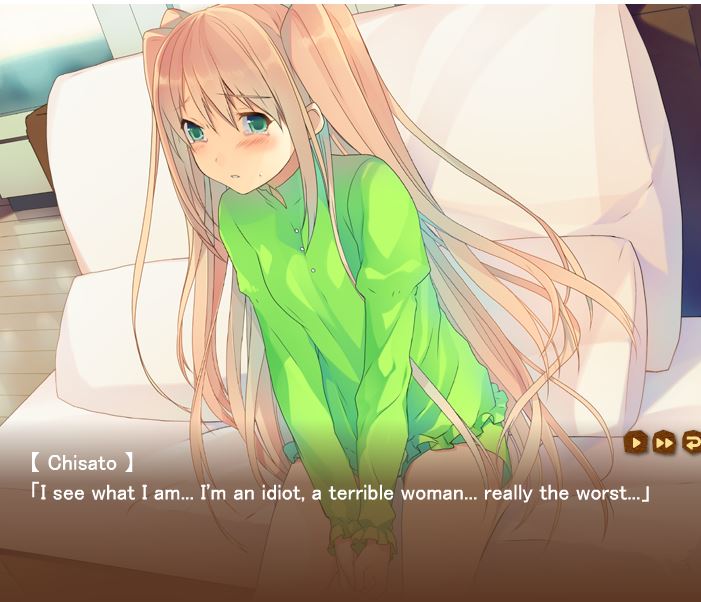