Jump to content
Genpei Ryouran Emaki -Gikei- and Waga Himegimi ni Eikan o are both good games, yet the first one has too many downsides this time.
1. Go-toubun no Hanayome ∬ ~Natsu no Omoide mo Go-toubun~ 五等分の花嫁∬ ～夏の思い出も五等分～ [210325] MAGES. GAME 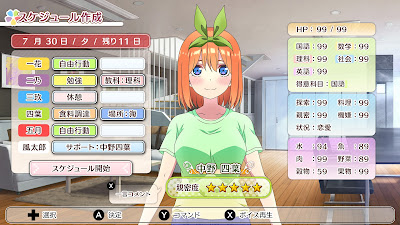 In the game, the Nakano quintuplets, protagonist Uesugi Fuutarou, and Fuutarou's younger sister Raiha went to the Nakano's private island during the summer break only for three days and two nights. But due a heavy storm, the group is unable to going back and has to spend 2 weeks in the island.
Anime Spin-Off SIM
2. Genpei Ryouran Emaki -Gikei- 源平繚乱絵巻 -GIKEI-  [210326] inre 1 2 3 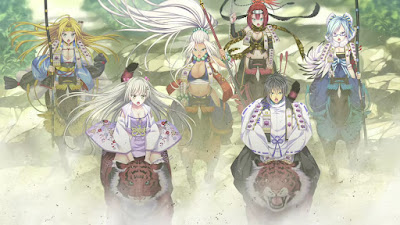 The latest historical adaptation from Inre, focusing on the late Heian period.
Protagonist Kanou Yoshitsune is the son of Kanou shrine keeper's family.
He is going to a school with other two. One is his sister Roko, and the other is childhood friend Shizuka.
They go to Kyoto with school trip, but Roko goes missing in Kuramadera. Yoshitsune and Shizuka goes to Kuramadera to find her, but they loses consciousness in the main hall. When they woke up, they were still in Kuramadera but something was different.
They were in Heian period, which is about 850 years ago.
There are English reviews
3. Isekai Sakaba no Sextet ~Vol.3 Postlude Days~ 異世界酒場のセクステット ～Vol.3 Postlude Days～  [210318] iMel Inc. 1 2 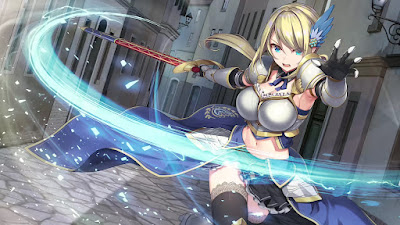 Much time has passed since our hero, the chef at an Akihabara maid cafe, got transported to another world. One day, a lone girl storms into the tavern, crying, "I'm here to inspect hostile activities!"
The girl in question is Anzu, the top-ranking maid from the maid cafe our hero used to work for in his home world. It is revealed that Anzu arrived to the other world after our hero, and has been working for the Stray Sheep's rival tavern. Following her unexpected arrival, Anzu and Lupine talk things out, which for some reason leads to Anzu starting work at the Stray Sheep?!
In the midst of this chaos surrounding our protagonist, Plumeria joins the fight for our hero's affections, escalating the girls' battle to win his heart even further!
Our hero's daily life in a fantasy world at the mercy of six otherwordly beauties will forever be changed when a certain hero's vassal pays the tavern a visit...
Game is released in English and has English reviews
4. Island Diary  [210319] Watakubi 1 2 3 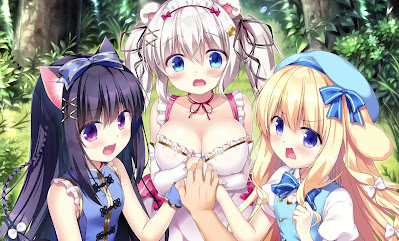 On an isolated island, a distant tropical wonder serves as home to the bear eared girl Momo. Despite the beautiful scenery in this seemingly idyllic paradise, she still experiences a sense of loneliness, as her only friends on this island are the cat eared Kuro and the rabbit eared Moka. However, they have slowly been drifting apart from one another due to the existence of a certain diary. But one day, a young man washes ashore, unable to recall any detail of his past beyond his name thanks to a few of his belongings being with him. Momo discovers Ryou in his daze as he wakes up on the beach unable to grasp how he ended up in this strange little paradise, and with her help begins to shape together what is now to become his new life.
With the positive energy of Momo and the help of Ryou, the three girls and the lost young man find themselves building a new day on the solitary island together full of excitement and titillation.
Game is released in English and has English reviews
5. Yukiiro Sign ユキイロサイン [210326] Wonder Fool 1 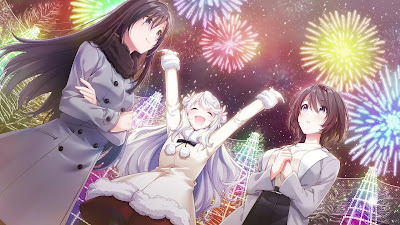 A story about the coming days in the winter.
The city of Minami-Ose is one of the places where it snows the most every winter in Japan and has one of the lowest population densities in Japan. With the first snowfall in the last few decades, I have noticed that something is going to change. But I’m not sure if I’m really capable of preparing for such a change.
Winter is only about two months away.
Munefuyu Hazome’s spends his daily life with his friends.
There's his childhood friend, Nakoso Miku, who is quite serious, quiet and a bit timid, but has a good heart. There's also the foreign student from Russia, Svetlana Gurchenko or nicknamed (“Sve”), who is shy and but also quite assertive. Then there's Takahagi Kako, his long forgotten childhood friend who moved away long ago and transferred back recently. And finally there's his closest and most understanding childhood friend, Usuki Hironaka.
This is the story of the wonders of everyday life in the winter.
This is the story of a time that is not long, and not light.
This is a winter for the future and the past.
There are English reviews
6. Waga Himegimi ni Eikan o 我が姫君に栄冠を [210326] Minato Soft 1 2 3 4 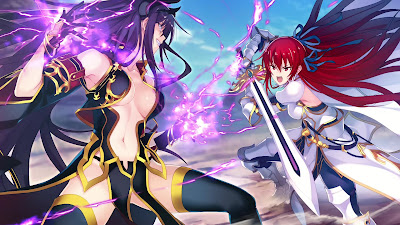 The protagonist, Shaon who grew up in a remote area, taught a technique called Tenken by his teacher.
The teacher hopes that Shaon will pass on his abilities to his descendants.
When he is old enough, he needs to left his home to find a bride.
How you live your life, who will you marry? It all depends on your choice.
There are English reviews
7. Jack Jeanne ジャックジャンヌ [210318] Broccoli 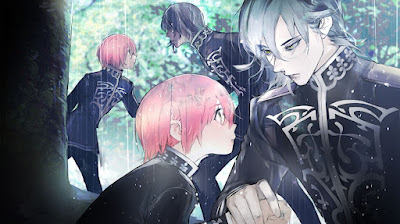 The game's story centers around protagonist Kisa Tachibana, a girl who had given up a career in theater, but receives an invitation to attend the Univers Drama School, an elite drama school for male actors, where students play female roles (referred to as "Jeanne" roles) in addition to male roles ("Jack" roles). However, to maintain her enrollment, she must land a starring role in the school's play at the end of the year, and also hide that she is a girl.
Console trap SIM