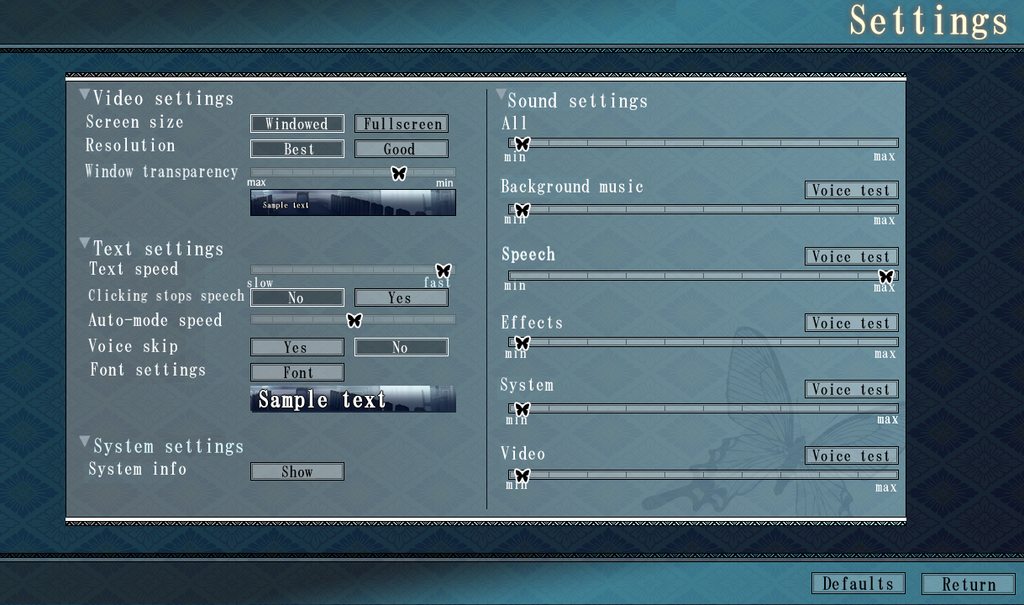 (Still a Work In Progress)

This week I was busier than in a long time with the project.

First, I must apologise. When I released the prologue patch I was sure that everything from the engine to the buttons would've been translated, and according all common sense it was the case... until I revisited it this week.

Let me give you a short version. I resumed my work on the engine since there were a few quirks I wanted straightened out. So I finished my work and gave the interface patch to my proofreaders, assuming that it would more or less go fine. Well, I was gravely mistaken. Hex editing, UTF-8, resource editing and much more. All of these were used in the engine, making some buttons, text, menus and some features to remain untranslated. Since then I've busted my ass ironing out everything and soon I can say that it will truly be completed. Allow me to say it again: I'm deeply sorry for my errors. I thought that just editing the files would be enough, but I was naive, too naive. I intend on finishing it in these following days, but the full interface patch won't be released. Instead, once the full patch comes out, that'll replace everything, and I'll destroy the prologue patch, since it's unfinished in every possible aspect. I hope you understand.

One other thing, One of our editor's work was severely lacking and after some serious contemplating, I've decided to kick him out of the team, recruit another QC and move the team roles around according to everyone's wishes. You can see those in the Staff page in the upmost part of the site.

As I just stated, because of this unfortunate outcome, editors and QC'ers have had their hands full with fixing the aftermath the one editor left behind, so I once again apologise for the lack of progress this week. But on the bright side, our team is now solid and the progress should be more solid and smooth.

Until next week, everyone!