I just wrapped up the translation of Futaba's good ending last night, (fought through some H-scenes...

So with this, we are officially halfway there. It's a pretty good feeling. Although the actual line count hasn't changed that much since last week, just seeing the "50%" makes me feel awesome

Many people might not really know that much about this small, fairly new yurige by a fairly unknown company. In Tsui Yuri, you follow the twin sisters Futaba and Ichika, who get along very well. So well in fact, that their mother thinks it is a bit too much, and she asks them to spend some time apart. Seeing as they live in the same house, go to the same school and pretty much always do everything together, this is a bit hard, and their relationship is strained. The story is told from both girls' perspectives, and there is 2 routes, with 4 endings total.

During the common route, you will make several choices that will impact the story and the girls' relationship. The "status" meter in game will show you how strongly each character cares for the other at any given time, and each choice will change this meter to a varying degree. One choice might bump Ichika's feelings a lot, where as some might make her care less and less for Futaba, and so on. 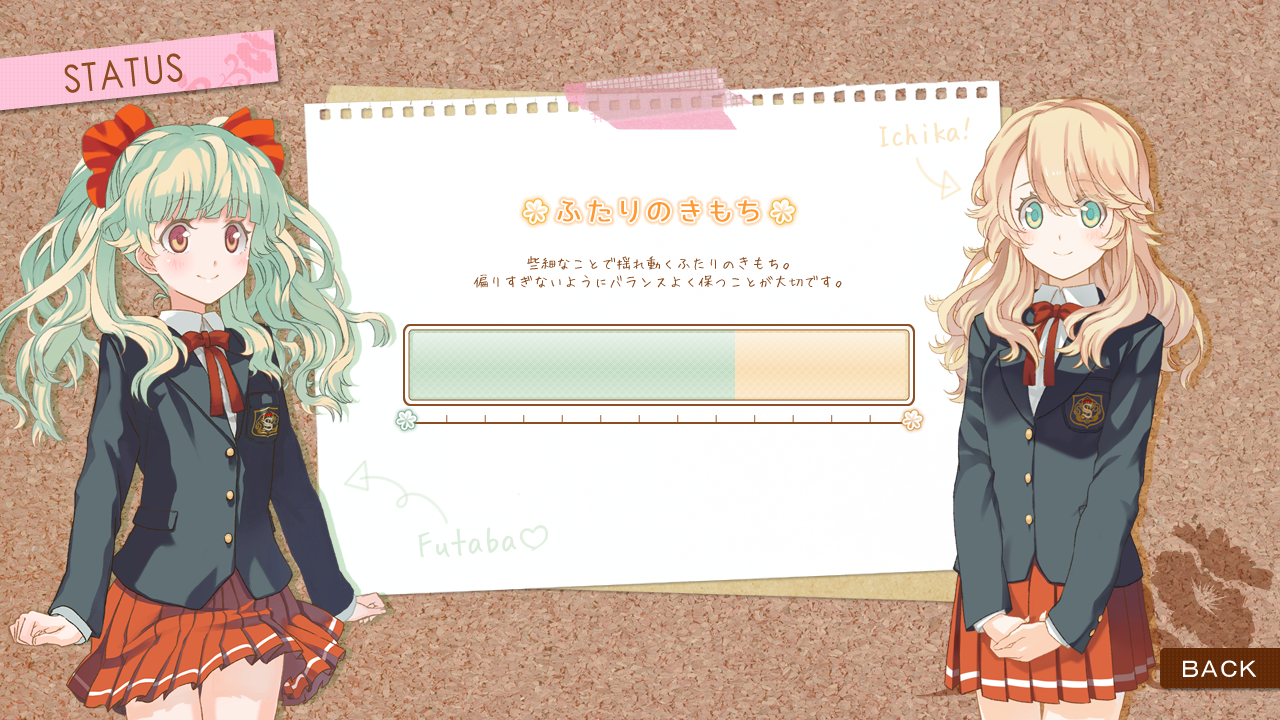 Currently not translated, as the image editing is not done by me. It is in the works, but not done yet.

What really interested me about this game was the choice and route system. There is no real set combination of choices that will lead to a route; you can freely play with the status meter, making different choices to see how it changes their feelings. To get a character's route, that character's feelings has to be stronger than the other one. (Meaning if Futaba has about 60% and Ichika has 40%, you enter Futaba's route.) But, if you manage to completely push it all the way to one side, (so now Ichika doesn't care about Futaba at all,) then you will get a bad ending. Meaning, which ending you get is decided by your choices in the common route, and not during the actual character route itself. This is really cool, because that means you actually get a "bad route" and not just a bad ending. (The line count in the bad routes are actually just a tiny bit shorter than the good ones. If you like bad endings with a bit of meat to them, these are actually pretty good. Also, yandere fans, look out.)

In addition, some of the choices you make in the common route will give you different variations of each scene, some which includes unique CGs, so saving and testing out new stuff is actually pretty much required. (Though, seeing as the game is quite short, it's a neat feature, not something that makes you sigh because you have read something similar before.)

Story wise, it is a very light game with no real "plot" other than two sisters growing more and more fond of each other. It deals with them moving from the line of "sisters" to "lovers" and things like that. It won't be everyone's cup of tea, but for yuri fans it's a really solid title. Also, like I mentioned, the bad endings are actually pretty dark, so for the twisted fellas out there, this one might be a bit interesting for you if you can stomach some adorableness first.

Let us take a quick look at the characters: 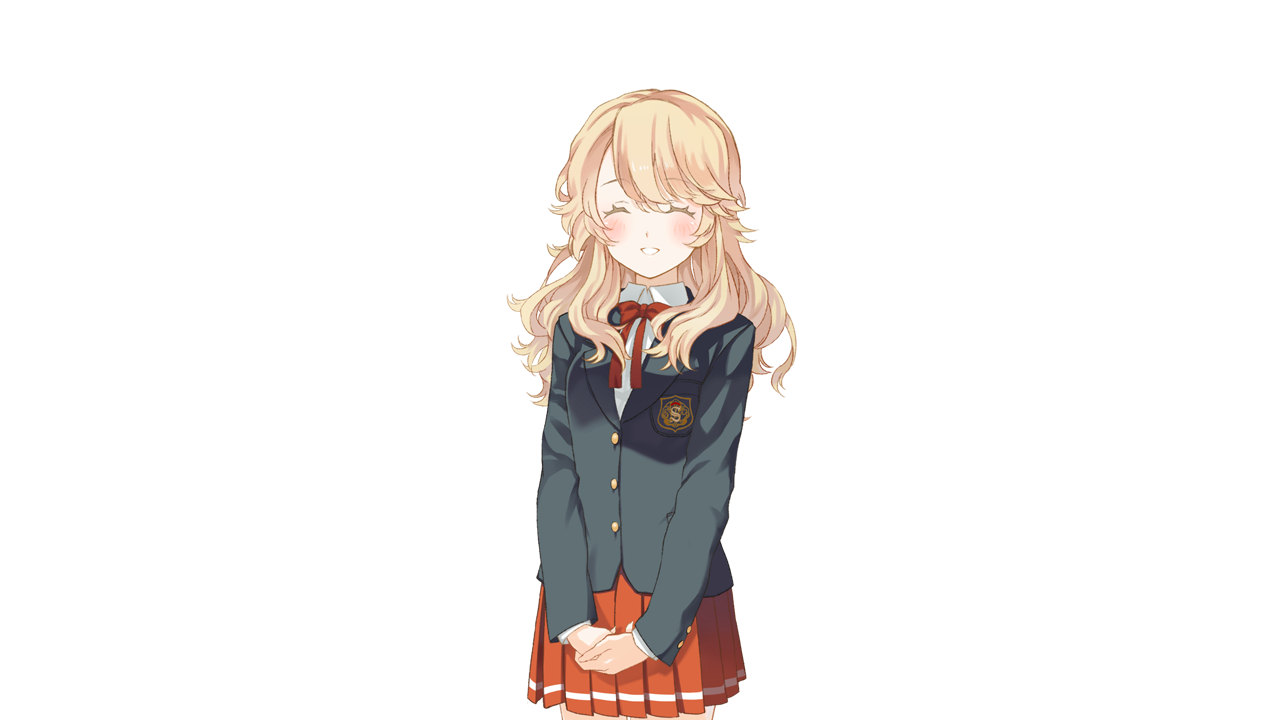 Ichika is the smart, cool and collected sister. She speaks politely, has a very calm air to her, is a perfect honor student and is also the vice-president on the student council. She is a bit too soft on Futaba, always helping her out with anything Futaba needs. Although she is very smart, she isn't the brightest when it comes to relationships in general - she simply isn't that used to interacting with people.

Futaba (God I love her pout.) 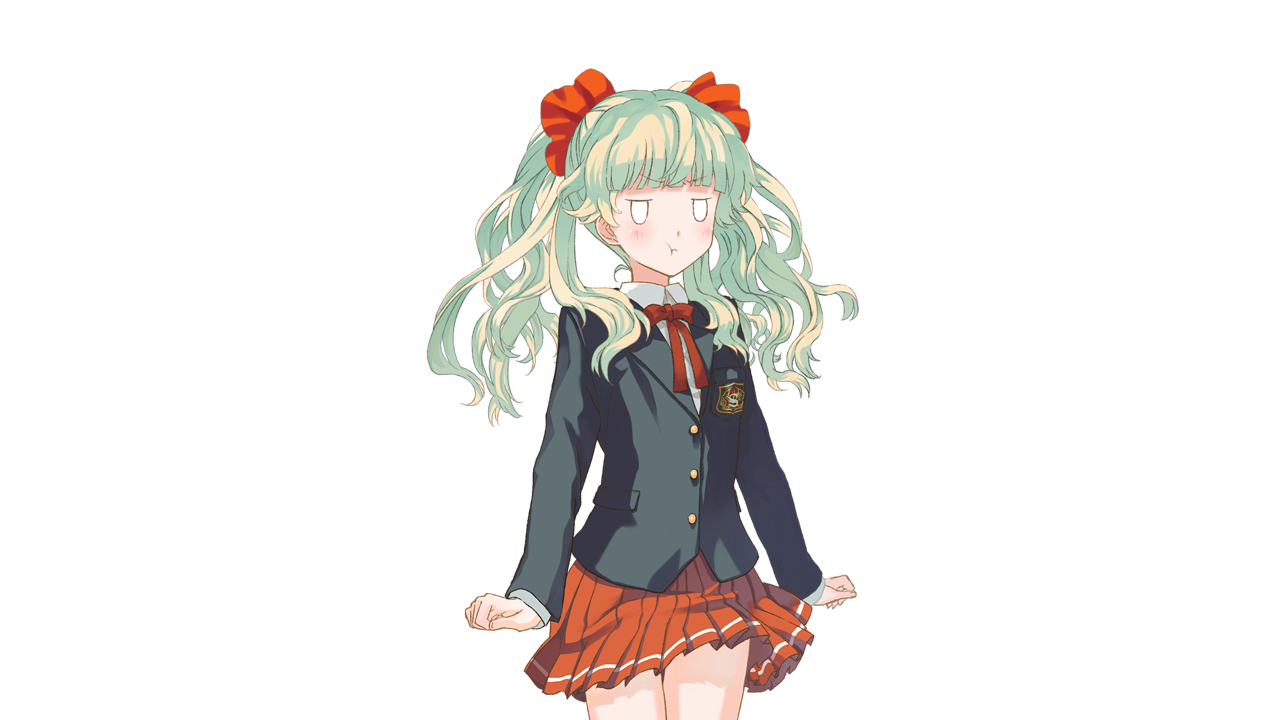 Futaba is the energy bomb of the two. She loves Ichika more than anything in the world, and always follows her sister around. She is way too spoiled, and doesn't do much on her own; she wants her sister to help her out with it. She isn't the smartest kid around, but she is very good at sports, and is a member of the tennis club. She is also way too adorable. 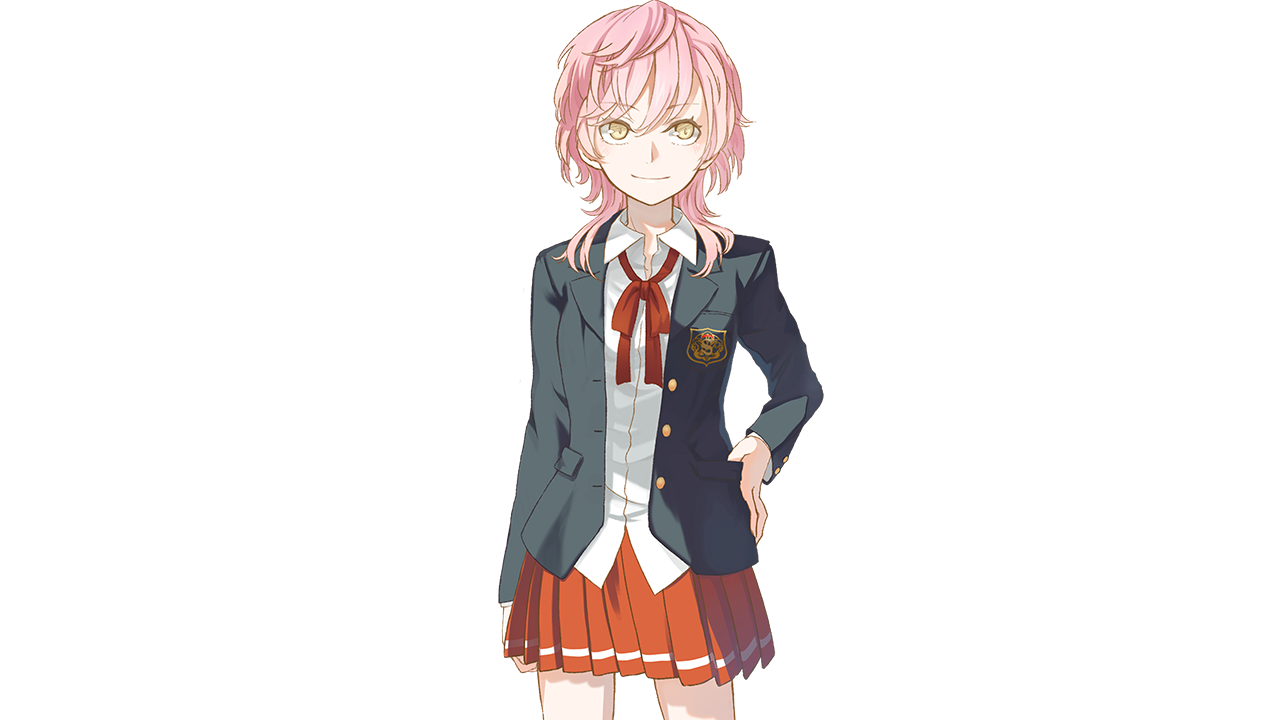 The sisters' childhood friend and Ichika's classmate. Yuri is a bit of a joker who tends to put ideas in the girls' heads. She speaks her mind, even if what she has to say isn't the most appropriate, which makes for some hilarious situations.

But although she tends to joke around a lot, she has a bit of an adult-like feel to her and is a very mature person when she needs to be. 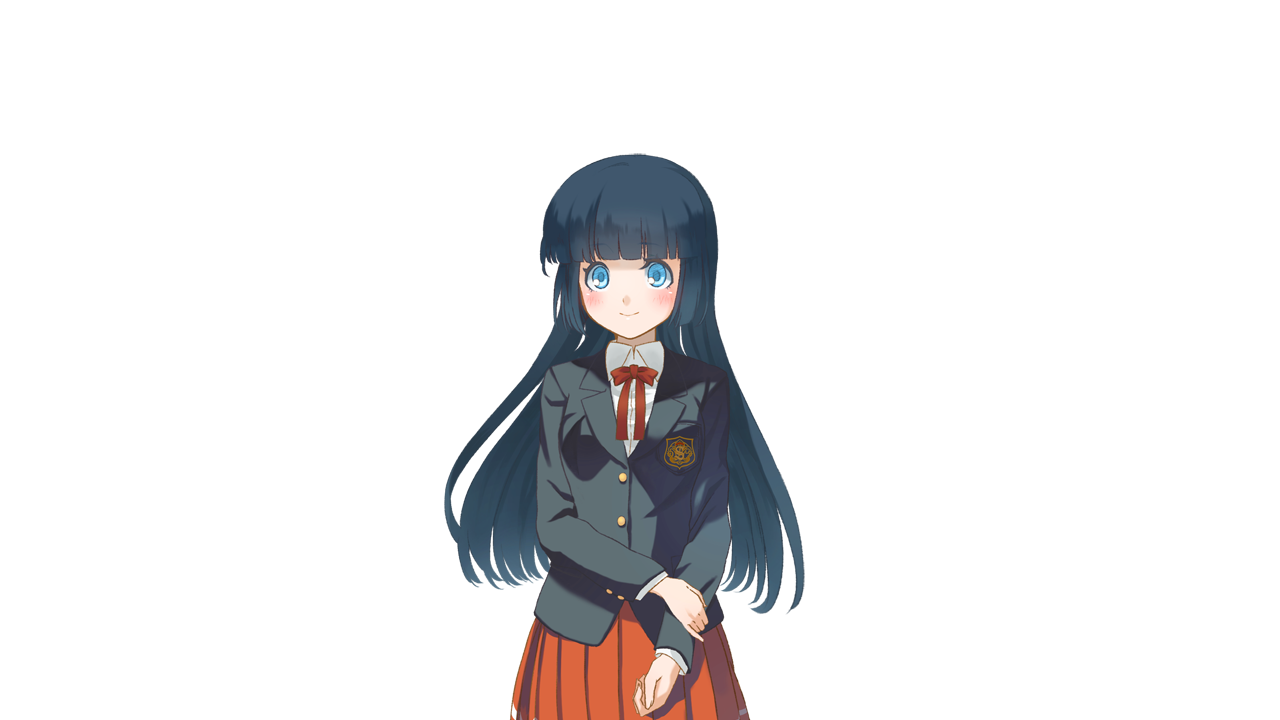 The sisters' second childhood friend and Futaba's classmate. She is a bit different from Yuri, and is a lot more polite and in many ways, similar to Ichika. Saki is a very gentle and sweet person, and wants to help the sisters out whenever they are feeling down. One big difference between Ichika and Saki is that Saki gets what people are thinking a lot easier, making her a bit less of an "airhead" when it comes to relationships and people's feelings.

Moving over to some questions and answers.

Question... (kind of): When I started the project, I felt that there was a few people who weren't quite sure whether or not I could do this. I think the quality of the final translation was their main concern. Basically, am I a complete scrub, or do I actually have some skills?

Answer: Well, a few things to keep in mind. 1, this game is very fluffy and very simple. It is also quite short. That does not mean it's something to underestimate of course, but I would never have started the project if I wasn't ready. There is a reason I aimed for a short, fluffy title without any intricate plot lines that would be hard to follow for a new translator.

In addition, the second I felt a bit overwhelmed, I stopped the project for a bit, as I knew that wasn't the way things should be. I am completely comfortable with this project now, and although I know my translation will not be a top tier piece of work, I can assure you at the very least, it won't be wrong. Like, I won't translate peppers to peas. (Isn't that right Kriririri

Anyways, I know I am new to this, I know I will make some tiny mistakes here and there, I know the quality will be a bit lower than what some of the very skilled individuals out there manages, but overall I am happy with the way things are going. I'm learning a lot, I'm improving, and this is just the beginning of my translation career. (Even if that makes some people more angry than happy

Question: Will there be a prologue patch/ partial patch released?

Answer: We still have a few issues with the engine, (which is stupid and retarded,) so a potential patch now would have a few annoying bugs and errors which would just be distracting. The scripts also aren't really polished quite yet, as it's only been me and an editor working on it as of right now so... I'm going to say, no. It just wouldn't be a pleasant read in its current state, and seeing as the game is so short, it's pretty much pointless either way.

Question: Do you have an ETA for the patch?

Answer: It's hard to say. I could give you a rough estimate, but I would rather not. The thing is, the amount of time I have to work on this is a bit limited. I absolutely love working on it, and I have a blast the entire time I do, (except for when the damn H-scenes suck the life out of me.)

The thing is, this is my first translation. I have never translated anything before, and the work is very tasking. Sounds silly, I mean, all I do is look at something in Japanese, then write it in English, right? Well, there is a lot more to it, and honestly, it's very mentally draining. Even just a simple one hour session can leave me exhausted. Not because I get bored, but simply because I have to think a lot, and I'm not used to that. Wait...

Because of the fairly limited amount of time I have each week, there is only so much I can get done on a weekly basis without overworking myself. This is a very new thing to me, and I want to make sure I move forward at a comfortable pace. Seeing as I have no deadline or anything, I can take it exactly at the pace I personally feel is right, even though that might be a bit frustrating to others.

Basically, I can say that it will be released in 2016 for sure, but I can't say anything more specific than that.

A bit of progress on how things are going on our end.

The translation and editing is going fine, and is moving around the same speed. The reason the editing is lagging a tiny bit behind me right now, is because the translation I work on every week isn't made available on the GIT for the editor until I upload it on Thursday nights. That means he literally has to edit it all during that night to get it ready for the Friday update, which ... well, if he was doing that I'd be a bit worried.

We have met a few problems in the game which the hacker has to take a look at. This is something I can't do anything about, as I barely know what a computer is, so without Porygon on this project, this whole thing would not have been possible. (Thank you so much.)

To finish up this post, I'll just put out there that we are working hard and that the patch will be finished. I know a decent amount of new teams tend to suddenly just die out and vanish. That will not be the case with this project. Like I said before, I'm having a blast translating this. Although it might not seem like I'm getting a lot done, it's simply because I'm making sure I don't rush through things. Also keep in mind that real life is a thing, and that sometimes it takes priority over the translation.

Thanks for sticking with me and the team, and I hope you are looking forward to the patch.

See you in next week's update.