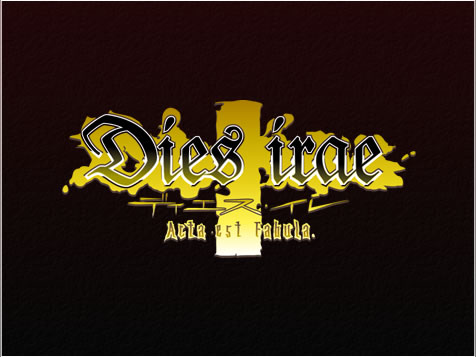 So this time I'm going to review this awesome novel, some users even consider it the best vn out there by far, a true kamige through and through ....

...sadly this is not that Dies Irae neither is Masada involved in this title in any way 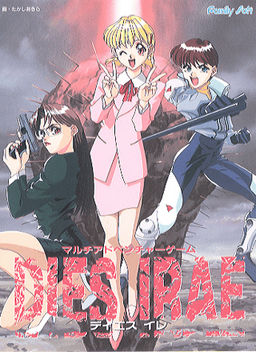 This DIES IRAE (all in caps, because why not?) is the work of a company called Family Soft. They mostly made games for PC-98, 88 and MSX on the 90', later on they released some for the ps1.

You can choose between 2 heroines from the get go and their stories, while not the same, they are in fact related and they go in parallel through out the whole game even interacting and working together at some points. 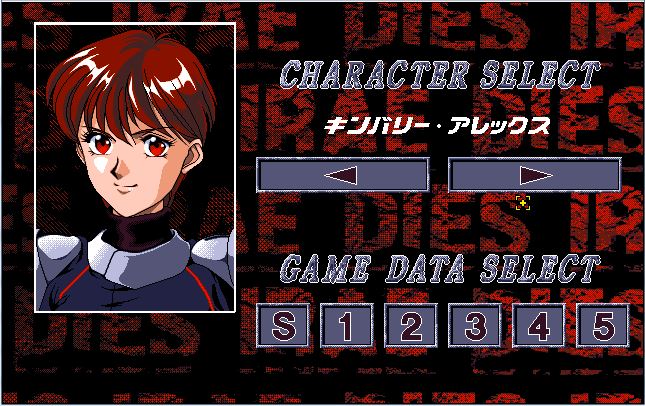 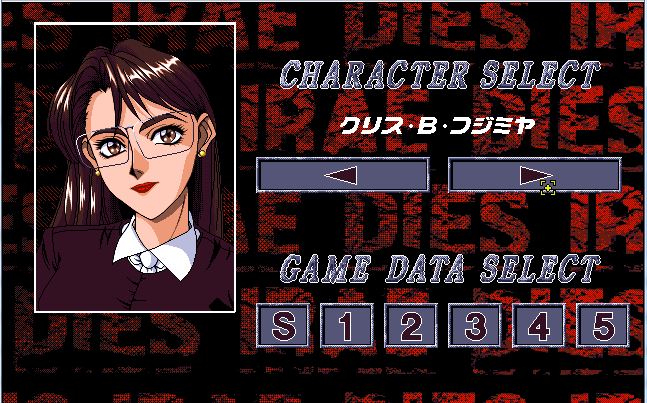 (the main characters of the novel)

, both of them are professional detectives and they have very opposite personalities.

Kimu on one hand is very cheerful and lively all the time, joking around with every single character (even with her boss), specially with his partner Rii and the receptionist Maria of the police station that she works for. On the other hand we have Kurisu, she is very serious and doesn't joke at all, very quiet too, sadly the game doesn't develop the characters practically in any way, we are just tossed into the game and in the next second we are already investigating some murder case or killing a guy, yes if you play with Kurisu you literally kill a guy 10 seconds after starting the novel xD but like I said there is no backstory whatsoever, later on we do find a bit of pieces of the relation that Kimu and his side partner and best friend Rii have but just a little.. the novel only focus on resolving the murders and nothing else.

In terms of plot, there isn't much to talk about, is just a regular murder investigation that ends up being a much bigger issue, revolving gang members, the mafia and later on some sci-fi elements, to be honest it wasn't anything I haven't seen so far in this types of vns or this genre in general, although it does throws you some plot twist that you wont see them coming which will leave you a bit shocked, but overall nothing really stands out.

In the graphic part, you have a pretty decent art style and sometimes with some really good "drawings" and CGs, It has some pretty gruesome scenes, sadly (or lucky for you depending on your tastes) there is no eroge. The characters are portrayed inside a side box and will change depending on what the characters are saying or felling just like your typical vn, they use this instead of the whole body characters sprites, although there are a few "whole body sprites" in the game too. As the sucker I am for old school pixel art style I just love it. 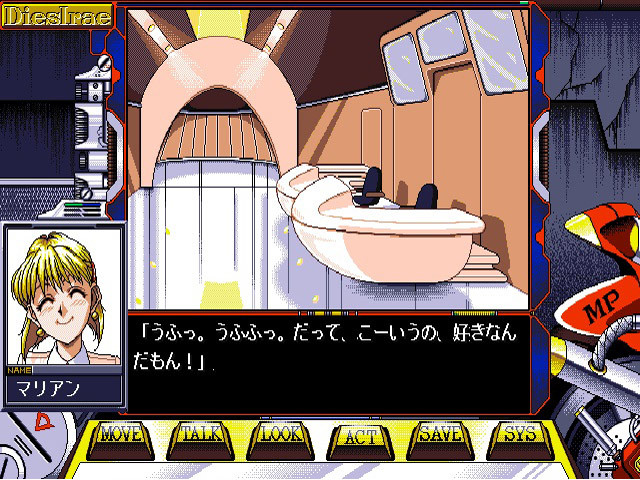 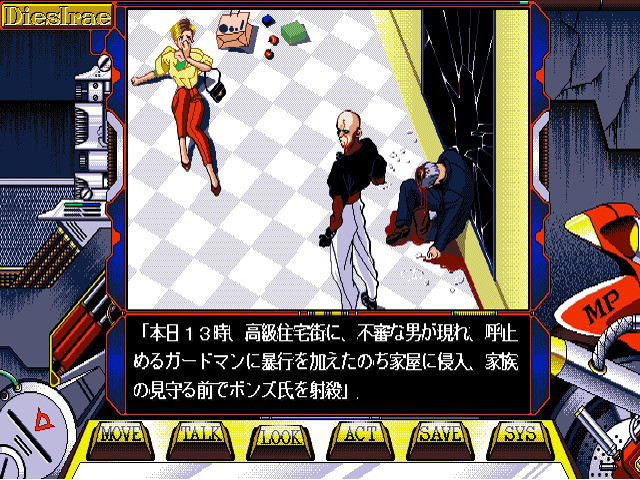 There isn't much to talk about here, the music is really nothing special, not bad but you won't remember the tracks after playing the novel, nothing to highlight, so yeah it does it jobs and that's what matter I guess.

Now the most important part... the gameplay, this is the biggest flaw of the visual novel. The gameplay is divided in two parts, the fighting and the way you progress in the novel using four types of commands, those are Move, Talk, Look and finally Act.

Move: will make you move through out the level, which is often divided into big section, for example the police station, the city, the slums etc.

Talk: will make you talk to yourself, other characters in the place you are or your partner if she is with you at that time.

Look: is pretty much explanatory, you will look into the scenery and search for clues.

Lastly you have Act, which will give you the option to interact with the scenery or things that are inside the scene itself, sometimes to progress by interacting with the scene and others is just for fun like harassing your partner or Maria if you are playing with Kimu. 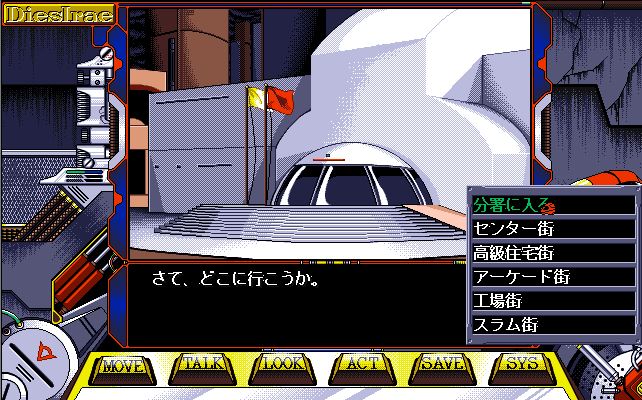 (all the location you can move in the "city" map)

Now to progress you need to do every single option, exhaust all the dialogs, check every single little thing etc etc. This is a big problem because most of the time you need to do them in certain order and if you don't you won't progress. For example in one part you will have to check the same fence several times but in some specific order and then talk to a character just to gain a new action to progress, this is just  a pain in the ass and holds back the story and the game.
There is also an specific part of the game where you find yourself trapped in a maze inside a mine, it took me literally 1 hour to beat that part because of the combat and this is the other huge problem of the game ... the combat...it is terrible in any way you can think of, some parts or certain events have fighting scenes which are mandatory and they are hard as hell... 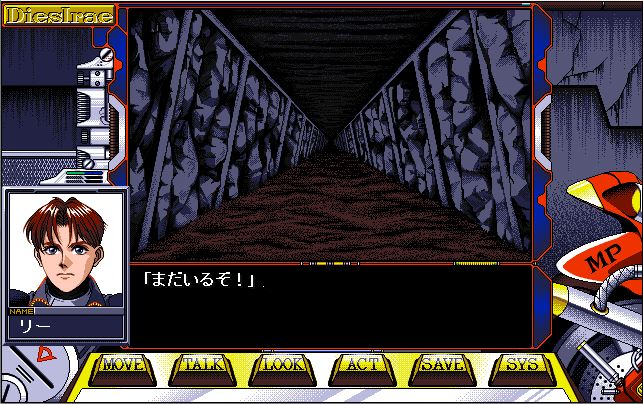 (The mines, you will be here for a while...trust me)


The fighting is turn based, but is so random and so fast that without using save states is pretty much impossible to beat, even using save states and lowering the speed of the fights(I used an emulator and cheat engine) I had so many troubles beating some fights, one fight took me 30 minutes.
You have your a health bar, four commands (forward, backward, offense and defense) and some kind of stamina bar to use which is constantly moving at light speed and doesn't follow any kind of rule. The game compares how much stamina you have against your opponent and depending on that you will hit, get hit or do nothing.
Now you think, offense will do some kind of attack and defense will well defense yourself but nope, sometimes defense attacks and offense does nothing and everything drains your stamina, losing your stamina means that you will get hit in that turn and probably the next 4 turns too. The enemy have almost unlimited stamina while you do 2 hits in a raw and you are done for.
The only good thing about the combat is that from time to time you can do an special attack which triggers a short full animation showing your character using a gun or doing some kind of fighting pose, nothing fancy but is nice to see. 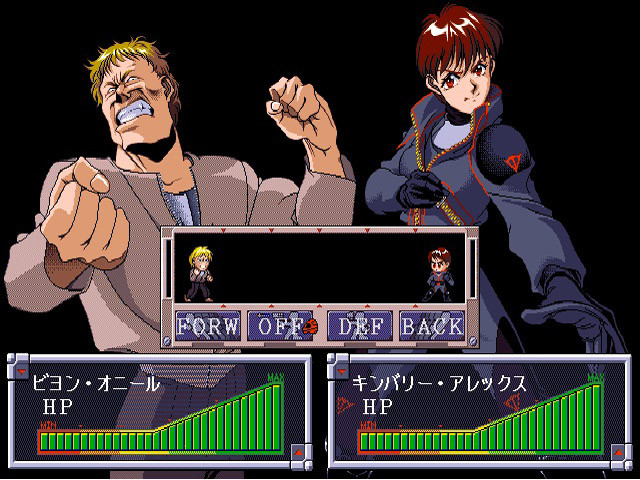 Overall I enjoyed this novel because it was dark and it wasn't afraid to do and show you what most of novels this days are and Kimu was a funny character to play with. The gameplay system is what made this novel really flawed but even with those drawbacks and flaws I still enjoyed although I can understand if someone doesn't want to play it or drop it after a few hours in because of that.

In terms of how difficult it was to read, it wasn't the hardest novel I read but it wasn't 120 yen stories or sanarara either, it's full of katakana terms and names (you will read more than 20-30 names in katakana I'm not joking..) Kimu is overall fairly easy to read, because she is a bit juvenile so her speech and thoughts are fairly easy to understand while Kurisu is more depressing and mature so her thoughts and dialogues are a bit more difficult, also later on the game gets a bit hard when the sci-fi elements kick in, by no means an impossible novel to read or understand.