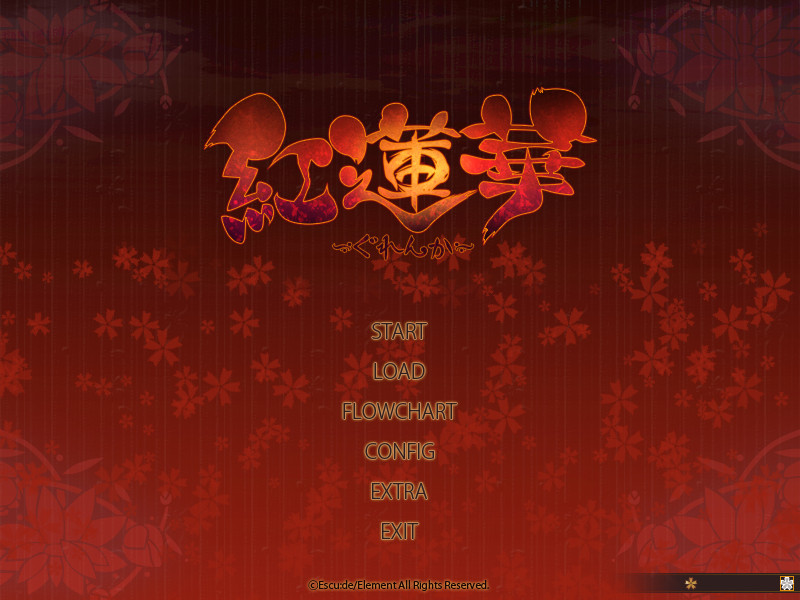 Gurenka (vndb) is made by Escu:de, a VN company which has a fairly long history of games I've never heard about. I stumbled upon the title on vndb (The naked red-haired girl in the screenshots had nothing to do with it, I swear!). As a Chuunibyou story, I thought I'd try to make a new start to the genre. My previous experiences in Chuunibyou ran me aground with 11eyes -Tsumi to Batsu to Aganai no Shoujo, which featured lack luster school slice-of-life combined with endless battles I couldn't see a point to. I ended up dropping it fairly early on.

As far as I can tell, Chuunibyou is all about embracing your the young teenager in yourself, the way some of us might have played "pretend games" with spies, secret organizations, and superpowers when we were kids. Chuunibyou involves combat where the circumstances of the fight fall secondary to the rolling emotions and the impact of the characters. Perhaps it because the characters themselves didn't make an impression but I couldn't get into the characters emotions during the 11eyes's fights. But that is fine, because Gurenka was a lot better in that regard.

From the UI and title song, I immediately felt the atmospheric component of the game. From the the lack of visible characters on the title screen (it's just wall of hazy red), I also thought the story might be more tragic, with the atmosphere acting stifling at times. When you finish a routes, you can toggle a character display on the title screen. Such a different impression from that red wall! All in all, the system aspect is very well polished. It's great.

{Note: This post is made having finished the common route (or at least one side of it) and Elsrise's route.}

It isn't long before Otherworld's start popping up. To be honest, when the protagonist starts invoking his powers and dealing with the situation, I was pretty left in the dust. I get what you're probably capable of combat-wise, but I don't know how it works, don't know how it solved the problem, don't know how I should think about it, nor where things are going to go from here.

From there on, the VN is a flurry of conversations with the characters, investigating the strange events, and new outbreaks. The incidents exist very much in an on-going fashion, with them happening and being dealt with in a non-linear fashion.

Now that I look back on it, most of the conversations were kept short and light. The few extended scenes themselves were varied, including a slice-of-life conversation and the conversation between the teacher and Saori in the hallway. I liked how that one stirred the pot of possibilities up while hinting at the two's characters. Good pacing overall.

The latter half of the common route and beginning of the route had some important fights involving Kuon, Ryouji and Elsrise. I enjoyed how past confrontations often got brought up later in the story. Sometimes things that happened are explained, other times the characters mention things that were strange that they noticed. Doing so made the fights feel important to the story.

I also think the middle part of the novel had pretty good flow. The relevant conversations, shifting of relations, and successive scenes all felt quite smooth.

The final segment of Elsrise's route was one big showdown. Suffice to say, it was exciting. Kuon is badass. When the trio was pinned down in the city, despite it just being a fight (there was no huge plot build-up nor greater purpose they were fighting for), just the renewed danger made it feel like full-on crisis mode. Though, it was a bit hard to follow along with the Otherworld plot, as it wasn't obvious what was going to develop into the next source of adversity. The origins and objective of the "foe" probably weren't fully explained in Elsrise's route, though I expect them to be in Kuon's route.

The overlying plot was Kuon staying by Kyouji's side until she sealed enough Otherworlds. As is common for stories with an initial nebulous overarching objective, its progress wasn't focused on much, other than Kuon noticeably becoming stronger as time went on. As Ryouji took towards sealing the Otherworlds, he quickly found himself caught up in much more immediate matters. Then, towards the end of the story, when Kuon breaks the news that this next incident might be the last, the reader, at least I was, filled with nostalgia/reluctance. This doesn't strike me as anything groundbreaking, but still, I can approve of a VN that can properly induce those emotions. There are a few BGM tracks that only play once or twice near the end which help set the different moods. There were a lot of little enjoyable things in the novel.

Besides sealing the Otherworlds, there wasn't really a major concrete goal to work towards. This was pretty different from what I was used to.

If I had to say, what made the plot feel moving forward was:

1. The protag gradually gaining an understanding of the Otherworld. At first he was just thrown into the fray, but later he makes observations and hears speculation and explanations of the other characters. [1]

2. The protag gradually learns more about Alsrise and Alize. [2]

[1] We first viewed the Otherworld as something that encroaches on the real world, and which attaches to (ie. haunts) a person.

Then comes the hypothesis from Saori, that the Otherworld and the real world being two seperate worlds with can be crossed by making them overlap slightly.

Then we get the explanation from Elsrise that the Otherworld is basically "masses of power" present all over the world, which reacts to people's strong emotions and manifests them.

[2] At first we only know that she doesn't mind leaving the Otherworlds alone. Later on we learn that she is worried what will happen if too many are sealed and gathered in one place, instead of being allowed to dissipate naturally. Lastly, we learn about Alsrise's homeland and her nature, being the product of people's dreams/longings.

I think I understand how the Otherworld forms the plot in the common route. The idea is that a ill-defined source (the Otherworld) leads to seemingly very-different scenarios, but which have some similarities to each other once we understand more of the details. The way Gurenka does it seems like one approach to using supernatural phenomena to fuel plot events.

I find it exciting how the nature of the Otherworld makes keeps the supernatural element relevant even for the human heroines. The humans routes will almost certainly focus more on the internal struggles of those heroines and how they are realized by the Otherworld.

At the start I mentioned Gurenka's polished menu and UI. Gurenka's one of the few novels which I've really felt how much the production values improved the experience (another that comes to mind is Eustia). The sprite and visual effects do a solid job in accentuating the characters motions. That, combined with the music, art, and sfx helped immerse the reader in the fight scenes.

I did had some minor complaints for the fights, nothing too much. It might be me not being used to reading fight scenes, but some of the effects CG's didn't seem match with the text description. Also sometimes attacks from different people used the same cg, which was confusing and made it harder to picture the action.

On the personableness of the opposing heriones

I like how Gurenka handles potential enemies interacting and sharing the same space. What I mean is this setup can lead to some constrained and predicable scenes (Tsukihime and Fate/Stay night). In Gurenka, they bump heads occasionally, but it isn't drawn out, and so it ends up feeling very smooth and pleasant while still being believable. Though, the latter might have only been possible thanks to the broad-mindedness of Kuon and amiableness of Elsrise.

Both kuon and Elsrise are in a position where they can further the main plot, without dumb quarrels (of course, if their quarrels had been story-worthy, that would have been a different matter).

I thought the Elsrise was going to be kuon's direct enemy, with their history being somehow tied to that, but she ended up being an unrelated existence, which was unexpected, but nice. The story might have felt constrained and a bit of a rehash if Elsrise's route was just another side of the same quarrel.

Kyouji and Elsrise's relationship development is a quite abbreviated, but their relationship is given an appropriate amount of along-the-way thought considering the space and the fact that the VN's plot does not hinge on their relationship. In terms of plausibility, Alize surprisingly succeeds in making the two's quick development more believable, but here also Elsrise's personality plays a large role.

On the MC's lack of personality:

Ryouji's thoughts, comments and reactions are sufficient to make the the VN scenes flow and be interesting, but he doesn't have a strong personality you can pin him down to.

Having an MC with a stronger personality would let the reader appreciate him as a character when he interacts with the other characters. It would also might include his character development. As he gets closer to Elsrise, you can see most prominently in her reactions. I can't recognize a change in him, because I can't grasp him as an individual in the first place!

A stronger personality might have also made his conversations with Saori more animated, with a back-and-forth dialogues instead of one-way conversations.

On the MC acting and thinking like a middle school student:

Ryouji being a bit of a kid actually interacts well with the characters and parts of the story:

Kuon is doesn't mind having fun together with, and at the expense of, a teenager like Ryouji.

Elsrise, at first, treats Ryouji as a noncombatant [3] (in that she has mercy on him), because of their gap in power and experience and because he is a human. However afterwards, she considers him properly and doesn't dismiss him for being a teenager.

To be honest, Ryouji having the mind of a teenager didn't effect his ability to get things done. There were no tactical geniuses in this VN: he was just about as competent as everyone else. It just is clearly visible occasionally, such as during Elsrise's route. It would have been nice if he gave more thought and consideration to Elsrise, towards the individual she might be.

Ryouji's human friends operate on pretty much the same frequency, so that fits too.

The other thing that works well with his young self is the fights in Gurenka. While they have a sense of crisis and "oh shit", they don't have a grave seriousness like a more serious title would. Because of that, perhaps his teenager's fighting spirit is more appropriate than an adult's would be. I'll be sure to compare the emotions at play when I read other Chuunibyou VN's like Evolimit and Tokyo Babel.

So far it's been an enjoyable ride. The characters are impressionable. Kuon is a riot and occasionally a storm, Elsrise is admirable, Fumika is adorable when she is pouting, Saori is the intelligent deducer of the group: I will be pleased if her route reflects the intelligence she displays so far. The miko is by far the character we know the least about. She has almost no telling lines in the whole route. I hope she gets a long enough route and makes an impression later on.

For the next route, I'm going to resume from the closest branch on the flowchart (flowcharts 最高!!!). Onwards to Kuon's(?) route!!!