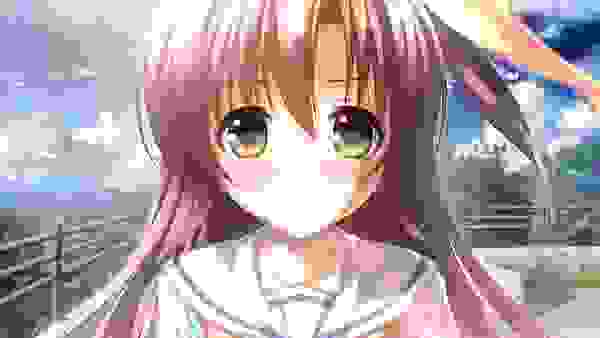 Mayura is the second of the two secondary heroines... the protagonist's osananajimi who, predictably enough, has hidden her love for him since childhood (*pukes sand*). Anyway, having gotten my Minori complaints out of the way in previous posts, I won't bore you further with this. Mayura's route is your basic 'genki osananajimi' route combined with Minori's love of excessive drama. There are plenty of hard-hitting moments, that I'm sure that romance lovers will follow with excitement. The route itself is well-written (I'll give Minori this, for all their flaws, their writing is usually pretty good). If I have a complaint, it is that, once again, there is perhaps a bit too much focus on Touwa, though that is perhaps unavoidable, considering how much of the game is about her.

Mayura herself is a lively otaku with a particular fondness for 'sentai' (think Power Rangers) and heroism in general. Mayura is perhaps the best supporting character in the game, aside from being a heroine, so I did manage to enjoy her path, to some degree (it is unusual for me to enjoy two paths in a Minori VN, so this is an accomplishment).

Touwa is the central heroine of the story, and she is the center of the common path, has strong influence on the other two heroine paths (which you have to play to get to hers), and is the main reason I didn't like the common path, in an indirect sort of fashion. It isn't that I disliked her, exactly... it is more that I disliked the way the protagonist reacted to her and the way the common route turned out because of it.

Her path... is about as intense as you would expect, after the previous two paths. It is definitely constructed as the climax of this VN, and there are things about it that are easier to understand if you played the other two paths (which is probably why they require you to play them). I really did like the way they played out the path, beyond the turning point before the climax... it was fairly hilarious (though really, most of Touwa's non-drama interactions with the protagonist are funny), and the drama was something romance fans will jump for joy over.

Overall, this is a VN that stops well short of kamige-level, but is definitely better than the average Minori game (ef), managing to at least be pleasing as a whole, even if it frequently angers or depresses in the particulars. It is important to understand that this is first and foremost, a romance, with a heavy fantasy element as an important plot tool. At times, it appeals too much to emotionalism (negative and positive both) to get you into the VN, and there is a distinct lack of appeals to intelligence. However, if you want something romantic and dramatic, this is a good choice... but don't expect a moege-type story out of it, lol