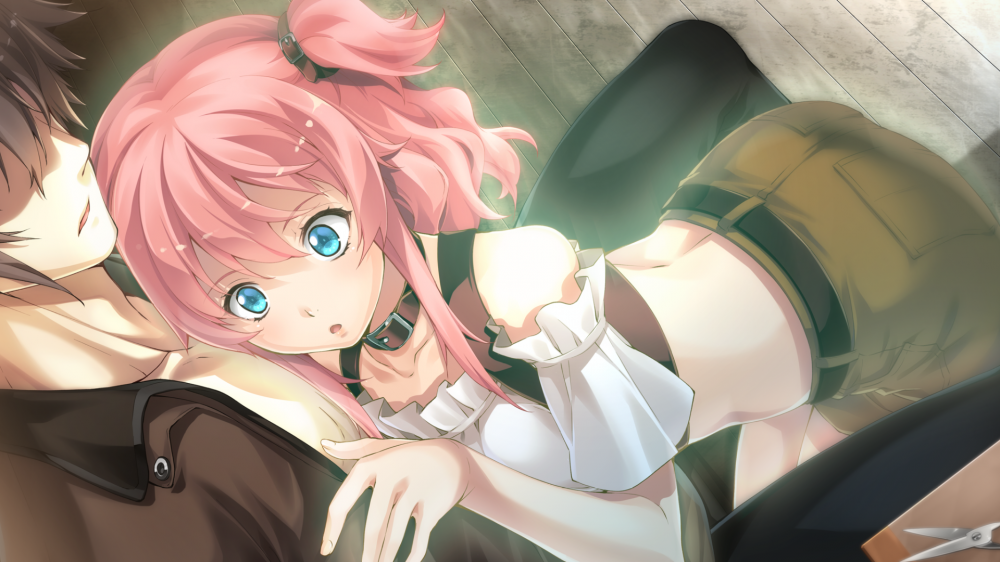 This VN was made by the same team that did Zero Infinity and Electro Arms, and it shows (in some ways). They have definitely improved their character balance and the way they present them, as well as the overall storytelling. The common route is fairly long (think about ten hours for me, about the same amount of time it takes me to completely finish a small charage), and it covers a rather large amount of content (there is no wasted time in this game at all, and yet it still manages to be as long as any of the other VNs by this team).

For those who are unclear about the setting, it is based a thousand years after a disaster that ends our civilization, due to a huge breach in the dimensional walls that basically renders our most important technologies worthless, giving us the power of Astral instead.

First, the protagonist... Zephyr. He is the antithesis of a hero, to be blunt about it. His nature is very base (he isn't a rapist though), with a tendency to prefer self-protection above all other things... except when it comes to Milly, the adopted little sister who is the focus of his current existence. In battle, he tends to either be evading... or dismembering/decapitating his enemies, using insults, misdirection, and brutal tactics to take them down, without any trace of mercy whatsoever. To be blunt, in battle he is either running around or a cold-hearted killer, lol.

Second, the heroines... Milly, Chitose, and Vendetta. Milly is the protagonist's adopted little sister, with whom he escaped the massacre that killed her parents and over 73,000 others in a single night. She is kind-hearted, a skilled technician, and a natural sweetheart to everyone around her. She is literally incapable of hating anyone, as far as I can tell. Chitose is... Milly's opposite. She is aggressive, strong-willed, and utterly merciless with those she considers to be her enemies or those of the state. Vendetta... well, lets just say that Vendetta is a bit inscrutable, though she comes across as a nagging older sister most of the time.

Third, I think that whether you like this game is going to be primarily dependent on whether you can like the protagonist (if you are already able to read Light-style writing, that is, lol). For all that he is basically pond-scum (and quite well-aware of it), he grows on you once you get past it. The common route defies the usual classifications for the simple reason that Light action VNs tend to be a bit hectic, lol.

Milly, as described above, is the kind-hearted little sister. Her route is fairly heart-rending, if only because of the way things fall apart so fast, once they pass a certain point. Her route shows off a number of interesting characters, ranging from the hedonistic fist-fighter Asura to Milly's master as a technician, Jin.

As always, I'm avoiding spoilers, so it is hard to figure out what I can say... Milly's route definitely has impact. I cried numerous times along the way, and Milly does manage to escape being another Kasumi (reference to Dies Irae), in that she isn't hopelessly out of place in the story, despite being the only 'normal person' heroine.

It is a bit frustrating that none of the biggest mysteries get revealed, but the fights were brutal enough to satisfy my bloodlust, though they followed the usual pattern that Light prefers, of the protagonist almost always being at a horrible disadvantage.

The ending is quite satisfying, though bittersweet (you can't avoid lots of character deaths in Light VNs), and I honestly was happy with how it turned out for Milly and Zephyr, though I did think that falling short of actually finding out everything that was going on behind the scenes means you will probably have to play this one first to avoid feeling unsatisfied with it.