Okay, so it's halfway through December already, a New Year is approaching, so it's damn time for one of those generic and nostalgic lists where you reminisce about the good shit that went down in the year that's coming to an end. And since this is a VN forum, I'll refrain from talking too much about how much I liked Devil May Cry 5 (best action game alright, well deserved) or how many hours I wasted in idol anime (you know, seeing DMC5 and idol anime in the same sentence is both weird and amusing xD), so let's focus on my list of the 10 best VNs I've read this year (out of 31*). Note that not all of them were really released this year, but I should consider myself luck to even be able to read them before 2035, Sumaga's release date, considering my slow reading speed. Then...

*Disclaimer: those 31 only include VNs that last more than 15 minutes so I can actually write a full paragraph on my impressions about them.

Okay, I wasn't expecting to start the list of some random doujin I pulled from the corners of VNDB. I admit I just picked this one because it's short, every vote cast before mine was a 9 and Ryou looked kinda as cute as any other dark-haired-blue-eyed anime boi www  So KtL or "Blushing boys: The VN" (bless) is a very cute and fluffy slice of life romance between a shy senpai and a head-over-heels-in-love kouhai, at least it was until the not so good porn and the weirdly dark bad ends came, and that's why this isn't ranked higher. It was actually more entertaining when nothing of "plot" was happening and it was just moege scenarios. 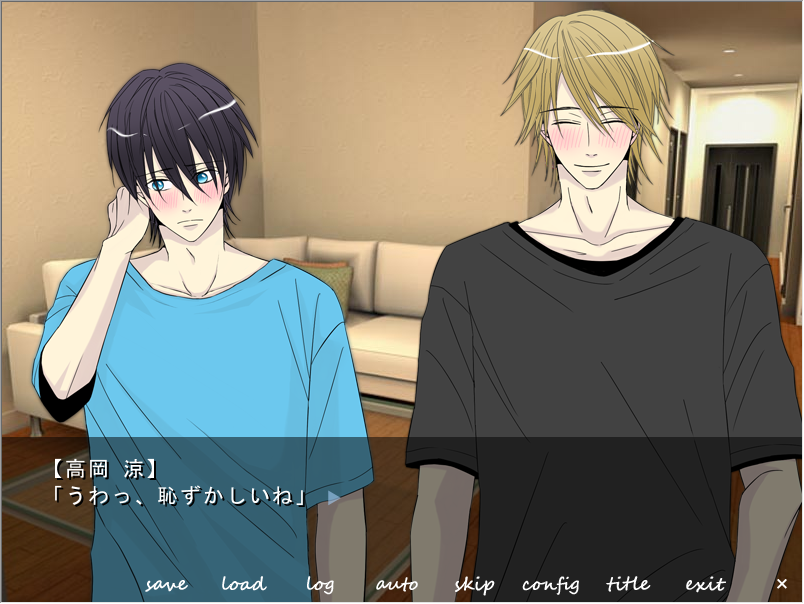 One of the few PC japanese otome releases of the year, Steam Prison had one interesting world and society going on there and some good plot points, but I feel the execution could be a bit better. The story had all the potential to create huge disasters, but it always solved them the fastest or easiest way possible. The cast is pretty solid though, and they had some fun banter going on at times, I really liked Ulrik and Adage (even if the latter can be very emo on occasion ww), both route and hero. 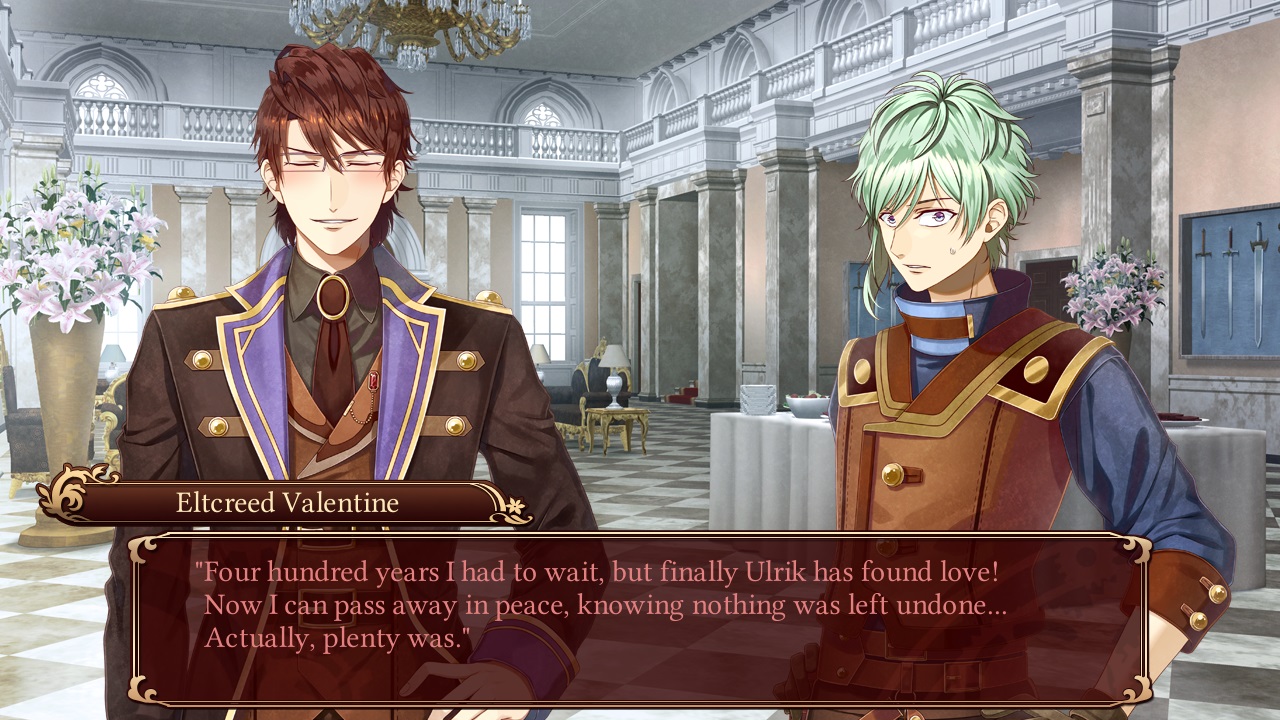 I've start this in the end of 2018 but only properly finish it in January 2019 so it counts, right??? The common route is pretty funny and interesting and the twist is quite good, as it changes the way you look at the story as a whole. As such the first and the second route were each a different experience, but I felt the effect kinda worn out a bit on the remaining routes. It does have your share of surprises, but it's not really the same as the initial big twist. The porn was a bit of a drag on most occasions and I just wanted the plot to keep going and, even if I know it would be a bit out-of-place in this story in particular, I would appreciate a bit more (or rather the existence) of actual lovey dovey romance. I loved Hiroshi, love me too, Hiroshi. 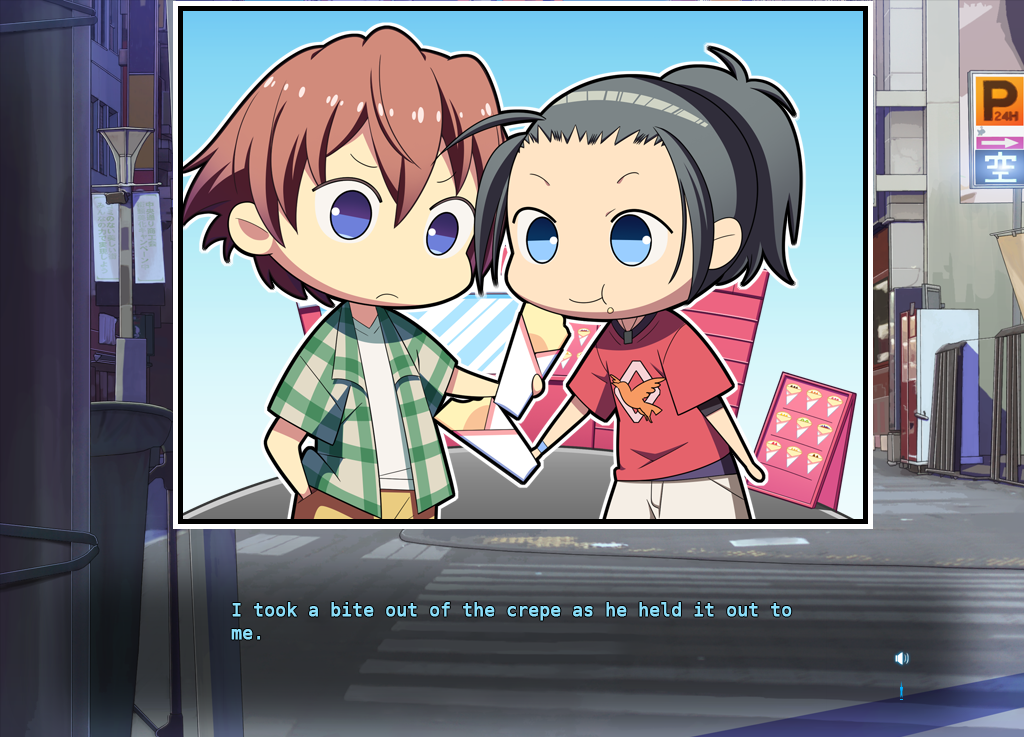 A VN that makes that assumption that "every EVN is low quality or a cheap imitation of the japanese ones" all but an unfunny meme. Very high quality art, good characters, nice ero content, and not only a main but also a side couple for us to cheer are all its strongest points. If I really have to nitpick something, I would say the plot is just okay, never doing anything really ground breaking or highly memorable. But hey, it's still worth every cent as it's one hell of a cute read! If the lack of voices bother you, a voiced version is underway soon tm. Justice for Morgan! 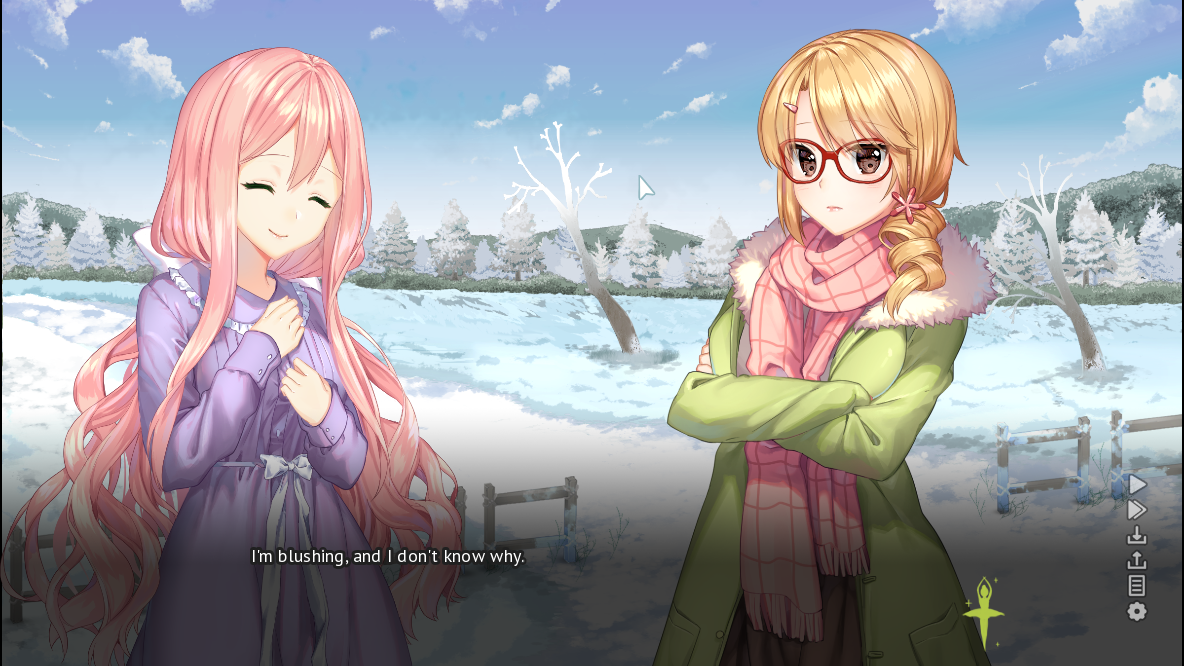 06) Hashihime of the Old Book Town

I still can't stop thinking about this game. The setting, the themes, the cast, the emotions, the style. And surprisingly it was pretty much done by one person (yeah, I notice I love everything that strikes my doujin bone wwwww) I really adore Hashihime's world and these past few days I started collecting every other piece of trivia the author shared outside the game itself. It really pains me that the mess that is the last route REALLY bring it down to 6th place when it could be an easy top 3. I even went back to writing reviews specifically for this game. I want to hug Kawase, but he's a germophobe, so I don't know, he can step on me then I guess. 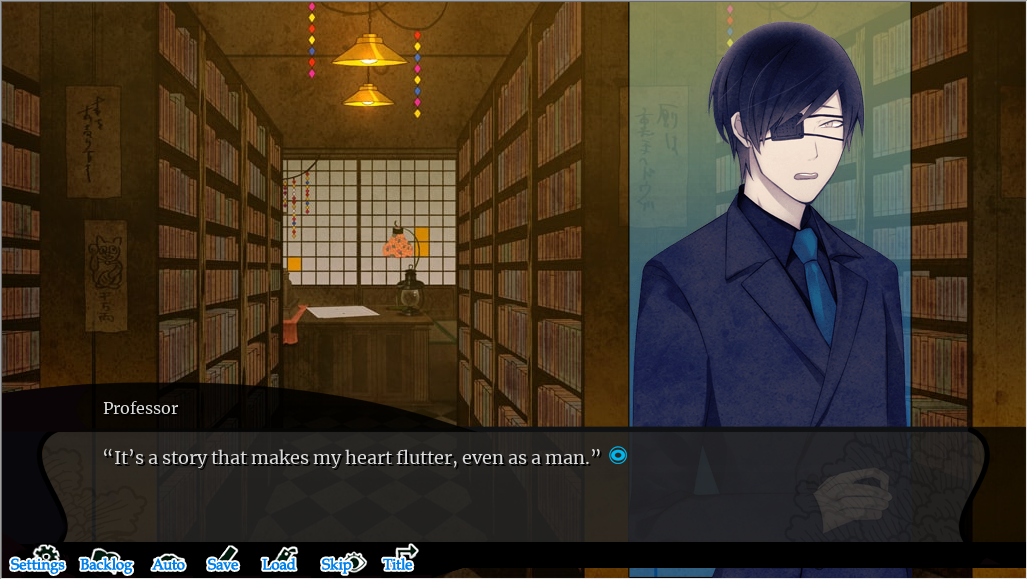 Hey look, another doujin! Think I should rename this top. I've read this way back on February 2019, many years late to the Insani patches party. Blame my late introduction to FSN. But now I corrected that mistake and had one very good time with it! The incredible setting, the relationship between Black Iris and La, each unique episode/chapter, it's short but it knows very well how to best use its duration. Maybe it could be a tiny bit longer, it would help me remember that I read this, something that inevitably longer novels have the advantage. 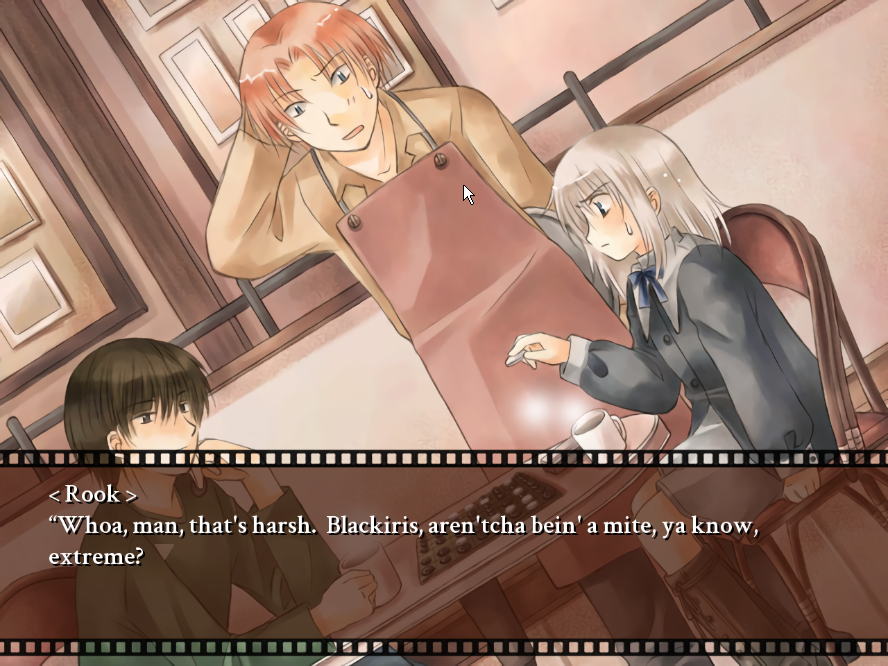 Not only of doujins Maggie lives, but also horror games. Movies can give me some thrill but the fear of your character turning a wrong corner and finding a powerful indestructible spirit? Yeah, that shit is my jam and the feeling of being constantly on edge out of fear of the unknown and committing mistakes are two things this game delivers. Add to that some detective work to defeat the spirits in the most efficient way (you can defeat them in two ways: the easy way nets you some bad conclusions but the game doesn't end there and you can even reach the normal end down the line. The smart way gives you the True End) and you have one easy recipe to hook me. Not that every puzzle/question the game threw at me was well done or made sense at all, mind you. But damn, I still remember that weird chanting from the Kanon Soldier chapter. It's replaying in my mind right now. Mashita is superior. 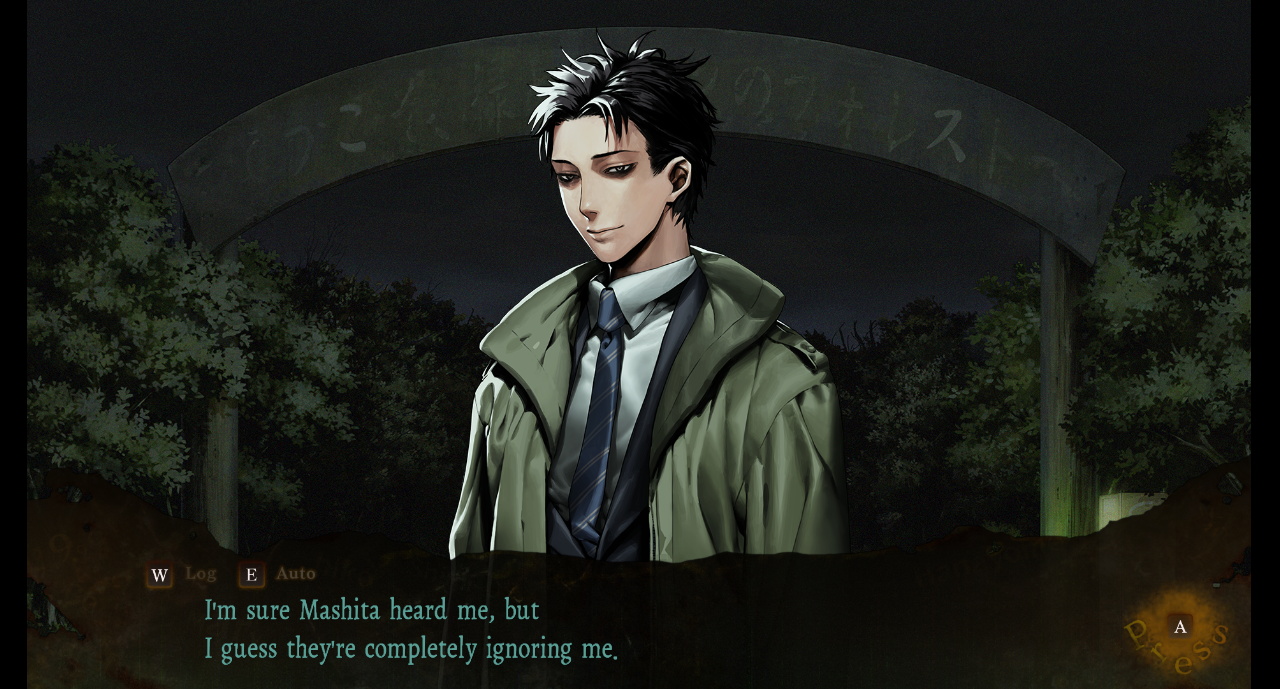 Or Gay Angst: The Game. Well, the angst don't really come from the fact they are gay for once, but boy, how many tragic backstories, tragic present stories can a short game have??? Even if there's plenty of supernatural stuff throw in, most of the sad stuff comes from bullying, suicide, grief and abuse, very mundane and real things, that made it all the more emotional for me. But it does have a lot of pure love, friendship and self-love themes that makes your heart warm after all. The romance is actually very soft as, if I recall correctly, we only get as far hand holding here. And can I really really praise how beautiful assets, be it the sprites or soundtrack, it managed to pull for a free game? Top doujin stuff and highly memorable. I kinda love everyone, I can't pick one boy >.< 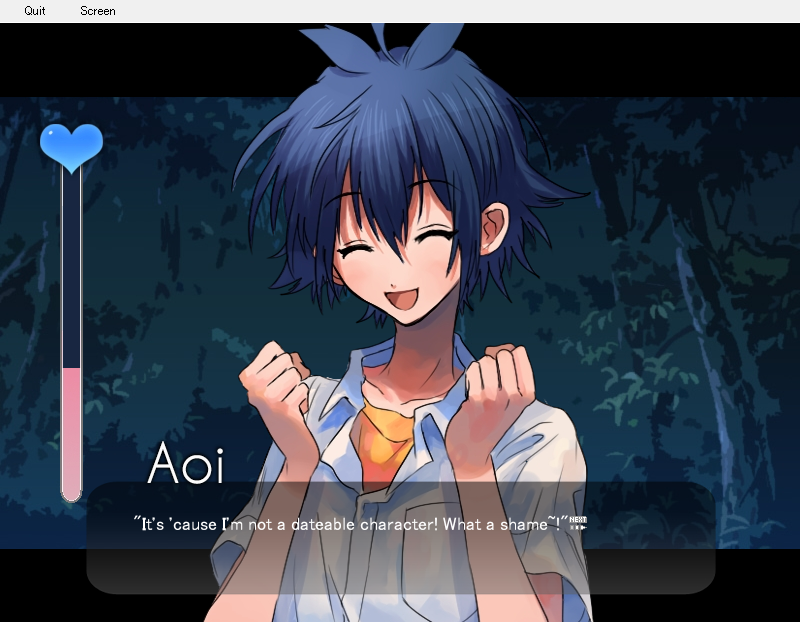 Another "cheat" entry, as I've read one (and a half?) route in 2018. But boy, this VN is mostly slice of life, but I didn't get bored with it once. I just didn't read this faster because my japanese reading speed is even crappier than my english one (well, I don't need a hook + dictionary for english). The "hotel between life and afterlife" setting probably helped in keeping things fresh and interesting and every hero and even the side character had something to add to the experience... for better or for worse xD But in every route our protagonist Hisora help the heroes reach their happy ending and oh I so love uplifting stuff. It's actually impressive how my first impression of the heroes get almost completely reversed by the time their routes rolled in, and grumpy Asuku ended up with the best boy prize, someone I didn't feel much for in the common route. Just be careful as this also have its share of really tragic backstories and very gory and graphic bad endings (no guide mentioned this about the bad endings so let's say I got traumatized). Bonus points for being one of my favorite games when it comes to coloring, its color palette is so very pleasant to look at, not blinding white + high brightness pastel nor MS Paint levels of vibrant nor your generic boring Adobe tones, only soft goodness!!!! 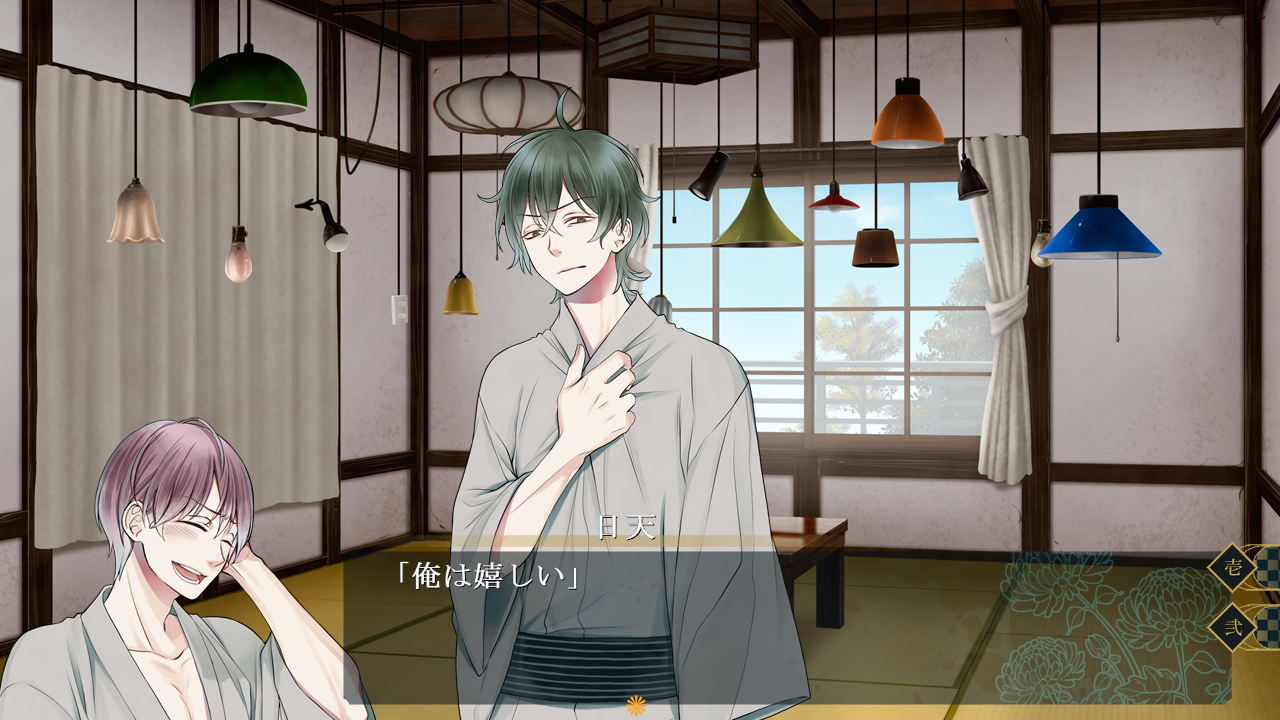 And here it is. My favorite VN that I read in 2019. And the VN that is currently sitting as my second favorite VN ever. A great horror story similar to Saya no Uta in some good ways, it tells the tale of Youji, whose daily life was quickly disrupted by the weird changes happening in his own body... and the creepy ways his school mates react to it. The fear of not knowing what's happening with yourself, the contrast between human reason and animal instinct that drive the characters' actions, the whole somber atmosphere and color palette (yeah, you probably noticed how coloring is important to me wwww) and the soundtrack that's sometimes ambient and others dissonant (in a good way) are all the highlights of this beautiful game. It's definitely not for everyone (some plot points can be... weirder than Saya's), and a romance that's more on the "licking each others wounds" side won't win everyone over for sure, but for me this is another win for Nitroplus in my book and peak Nitroplus CHIRAL by far. I just wish Youji all the happiness in the world as he suffers too much and he doesn't deserve it, my heart....... 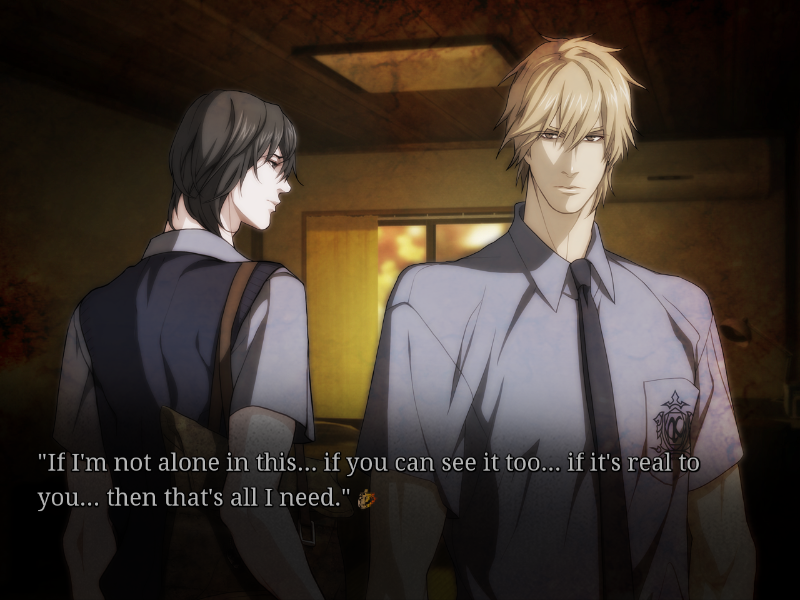 And that was my 2019! Overall, I think it was a very positive year for localization choices and my own picks, so guess I'll stick with this weeb hobby for one more year

Here's hoping 2020 will be even better! My wishlist is filled with enough reading material for 5 years, which ones will be the gems? I'm soon to hit 100 read VNs too, maybe I'll return with another top. Until then! o/