With Date A Live: Rio Reincarnatio being confirmed for an english release I figured I should make a review of it.

A quick summary of Date A Live Rinne Utopia

Date A Live Rinne Utopia takes place sometime after the first season on the anime and includes the characters introduced in the first season. Other than this there is also a new character Rinne a mysterious girl who seem to be Shido's neighboor as well as his childhood friend (they were never reunited, she was always there). Other than this there are some other odd things going on, for instance there is a huge tower in the middle of the city that only Shido finds odd and he has these dreams of a spirit appearing before him. During the common route there are of course also date events where you can choose between Kotori, Origami, Kurumi, Touka and Yoshino. After some of these date events you get into their routes and get an ending with them. After having gone through all the different endings you then unlock Rinne's route where I would say the meat of the story can be found.

For my opinion of it I would first like to say that I think this is a really good Date A Live VN. It takes full advantage of the setting of Date A Live and I think it does an excelent job both telling a large impactfull story while also giving lots of nice moments with each of the different heroines and pretty satisfying endings with each of the heroines. For the heroine routes there is always something going on whether there is an internal conflict for one of the girls or it is something else going on, because of this it felt like each of the routes managed to carry themselves as their own story and also make the romance between the heroine and Shido feel satisfying. For the overarching plot I think they do a good job building it up throughout the VN during the different routes and I think the story it tells is something that works perfectly within the setting of a VN. Rinne's route at the end then works as a great climax for the story with lots of epic as well as emotional moments.

A quick summary of Date A Live Arusu Install

Date A Live Arusu Install takes place sometime after the second season on the anime and as such also includes Miku and the Yamai twins. The main setup of the story in Arusu Install is that Ratatoskr has made a new dating sim for Shido to practise on which is a fulldive experience that has a recreation of the city they live in as well as the people living there. There Shido is supposed to go on dates with AI's with the same personality and looks as the spirits. However early in the game he meets an odd girl called Arusu, that he has never seen before and shouldn't exist in the game, she ask him what love is as she is curious about it and don't understand it. As this happens Kotori who has been talking to Shido when he was in the game loses contact with him and the people on the outside are unable to get him out of there, meaning he is stuck within the game. This then makes all of the girls hook themselves up to the machine to enter the game so that they can save Shido. This means that they are all stuck in a replica of their city going to the same school and living in the same house. So this means that it is essentially as if they were in the real world other than the fact that side characters are npc, they are forced into roles that fit a dating sim and there is Arusu using her powers to make special date events that happens in the dream of Shido and the heroine that puts them in special suituations with the aim being for them to get closer so she can learn what love is.

As for my review of Date A Live Arusu Install I guess I should start with the begining. I think that the way they use the setting of Date A Live to set up the story is really cool. Referencing my little Shido with the fulldive machine is really fun and I think it is a really smart way of getting the characters into suituations they otherwise wouldn't be. Other than this it also sets up a nice overarching mystery with Arusu and them being stuck in the game. Also because of the game's setting there are lots of things that are able to happen that wouldn't otherwise make sense and this is used to make lots of different scenarios with the girls. This I would say works well as fanservice for the girls not necessarily sexual fanservice, but more so seeing them in lots of different suituation like magical girl Kotori or shrine maid Origami which also provides some nice interesting artwork. A problem with this though is that these scenarios don't really do any job with building a good emotional story for the girls or get you connected to them, it just feels like pure fanservice with no substance. This made the routes for the individual heroines seem quite hollow, something that really hurt my enjoyment as this is the majority of the VN. The true route I feel does a good job on the emotional side and just in general having a pretty good and satisfactory story. So overall I would say that the setup and the true route are really good, but that it suffers from the other routes feeling empty only offering hollow fanservice that mainly just show different suitations with the characters in what seem like what if scenarios, though they do have good art and I would say some are quite enjoyable (magical girl Kotori is one that comes to mind).

Date A Live Rio Reincarnation works pretty much like a fandisc for both of the previous VNs. I don't think I can really go much into it without spoiling things from the other VNs, but what I can say is that they meet a small girl named Rio who looks for the most important thing (she doesn't know what it is just that she is looking for it). As for the content of Rio Reincarnation it features a few nice scenes with the heroines as well as give a bit more of a proper ending for each of the VNs. I very much liked this addition as I really liked the different endings in it as well as the story it told in general being interesting.

Just some quick remarks about the visuals, the visuals are really nice looking, which is to be expected as the artist is Tsunako, the artist behind the Neptunia series and Fairy Fencer F as well as being the illustrator for the original Date A Live light novel. However I found some rather annoying problems with the PS4 CGs. While most of them were as they should be, some of the CG variations had parts of the art that had been missplaced by a pixel or two or there being a difference in colour between two parts of the CG put together. Under are two examples with some red circles added just to show the area you need to look at. While these aren't really that noticeable I found it annoying as I like to screenshot all of the different CGs and have them on my PC to look at later and I don't want them to have these kinds of flaws. 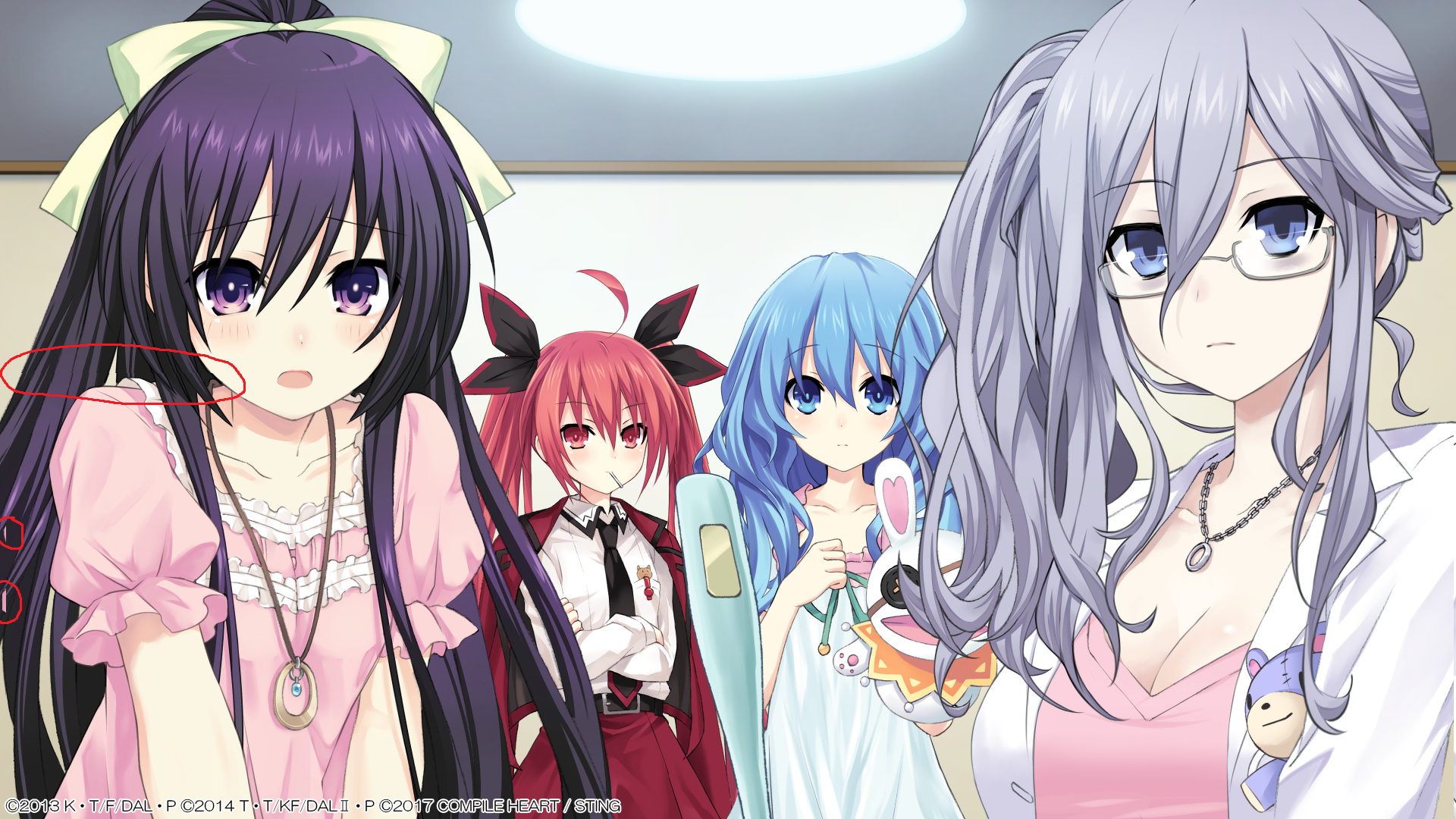 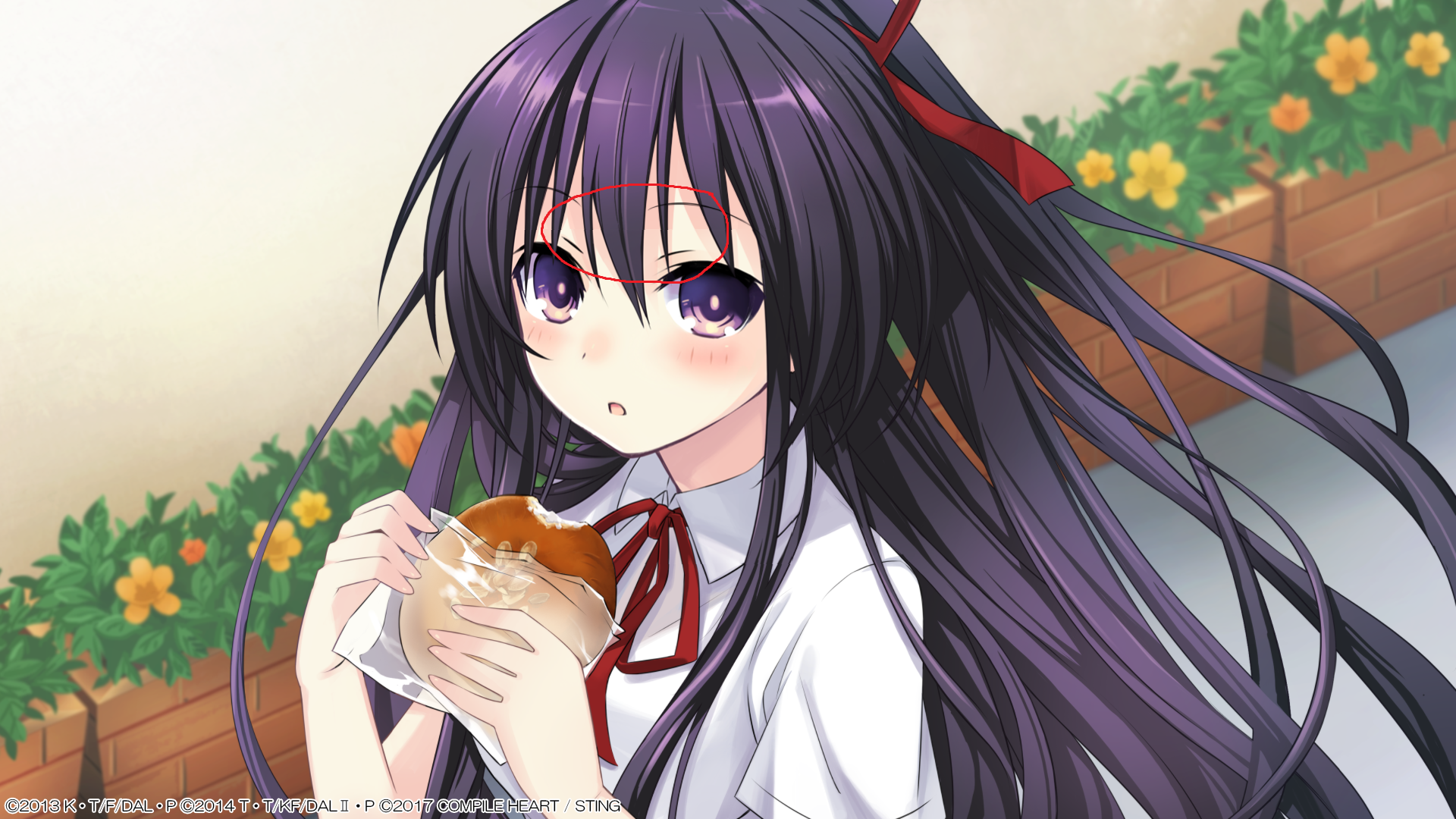 Cover of the limited edition 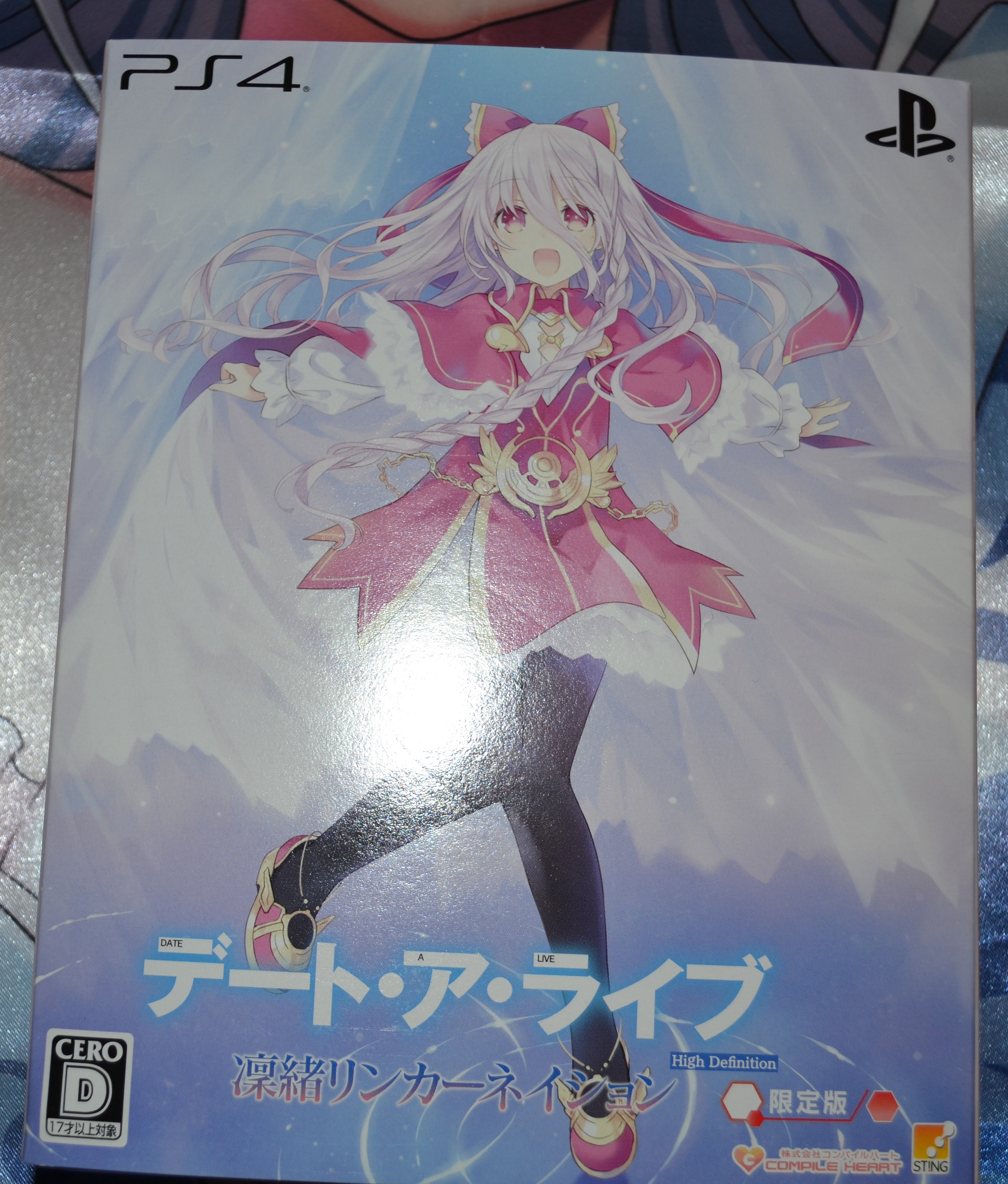 Back of the limited edition 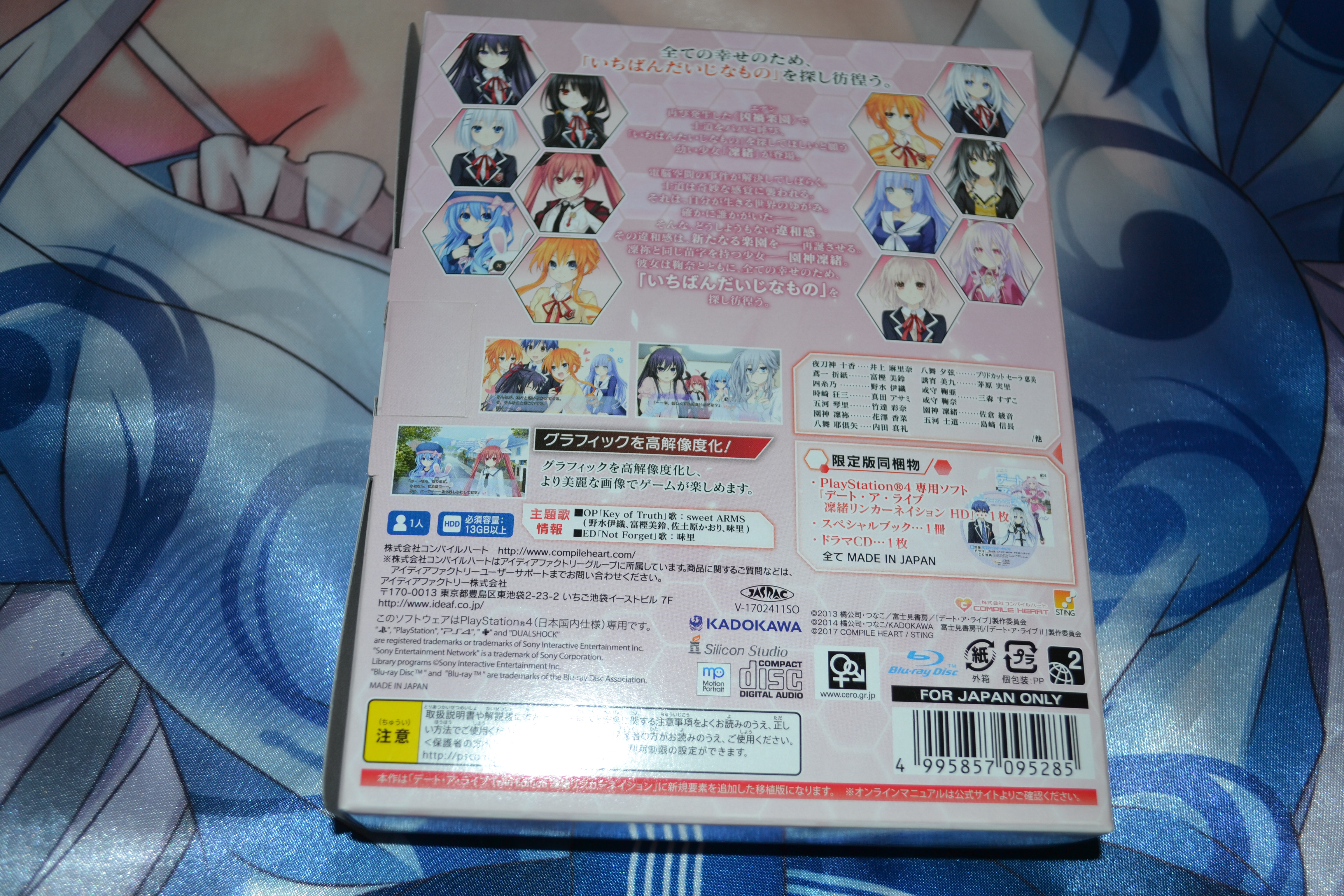 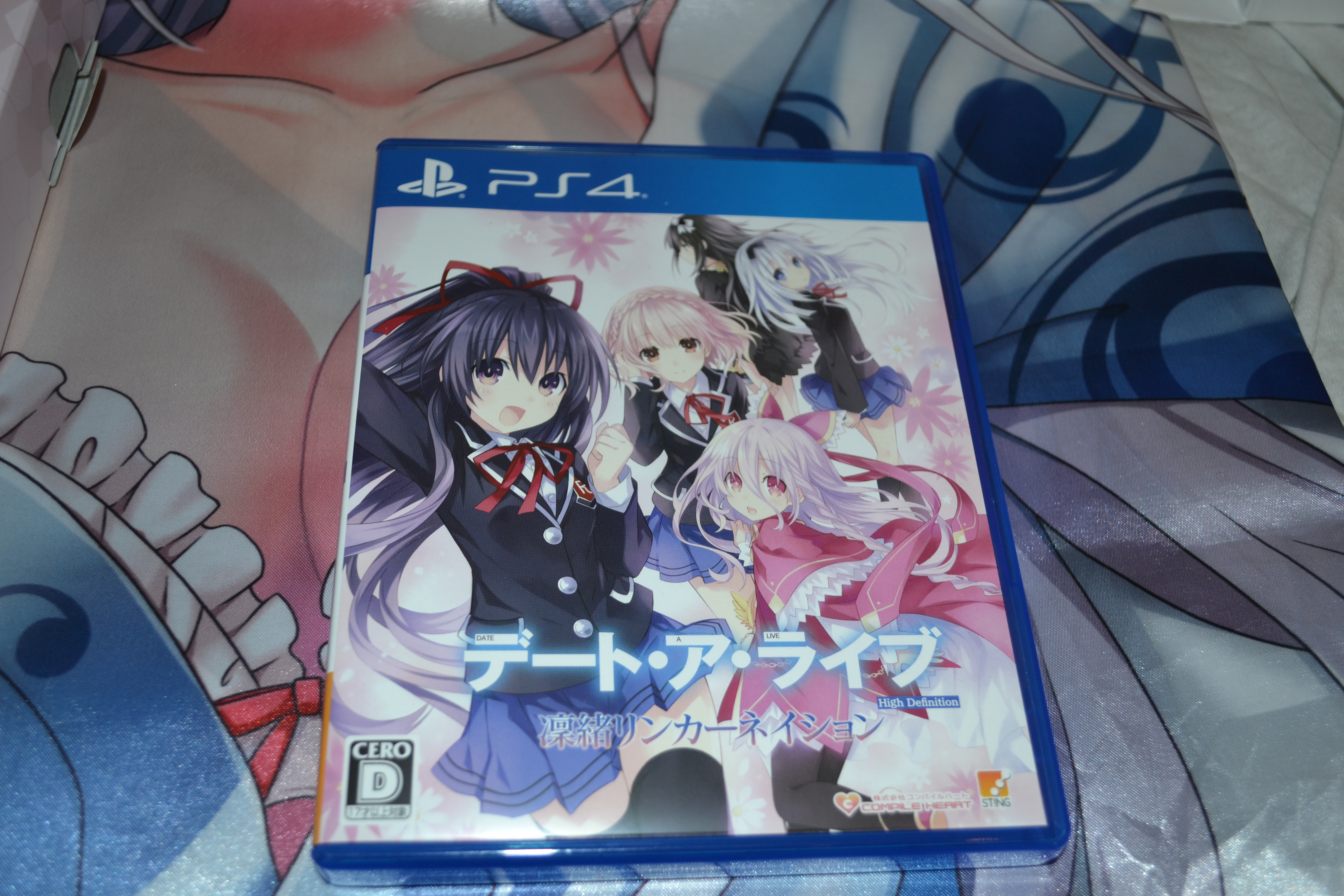 Everything included with the limited edition 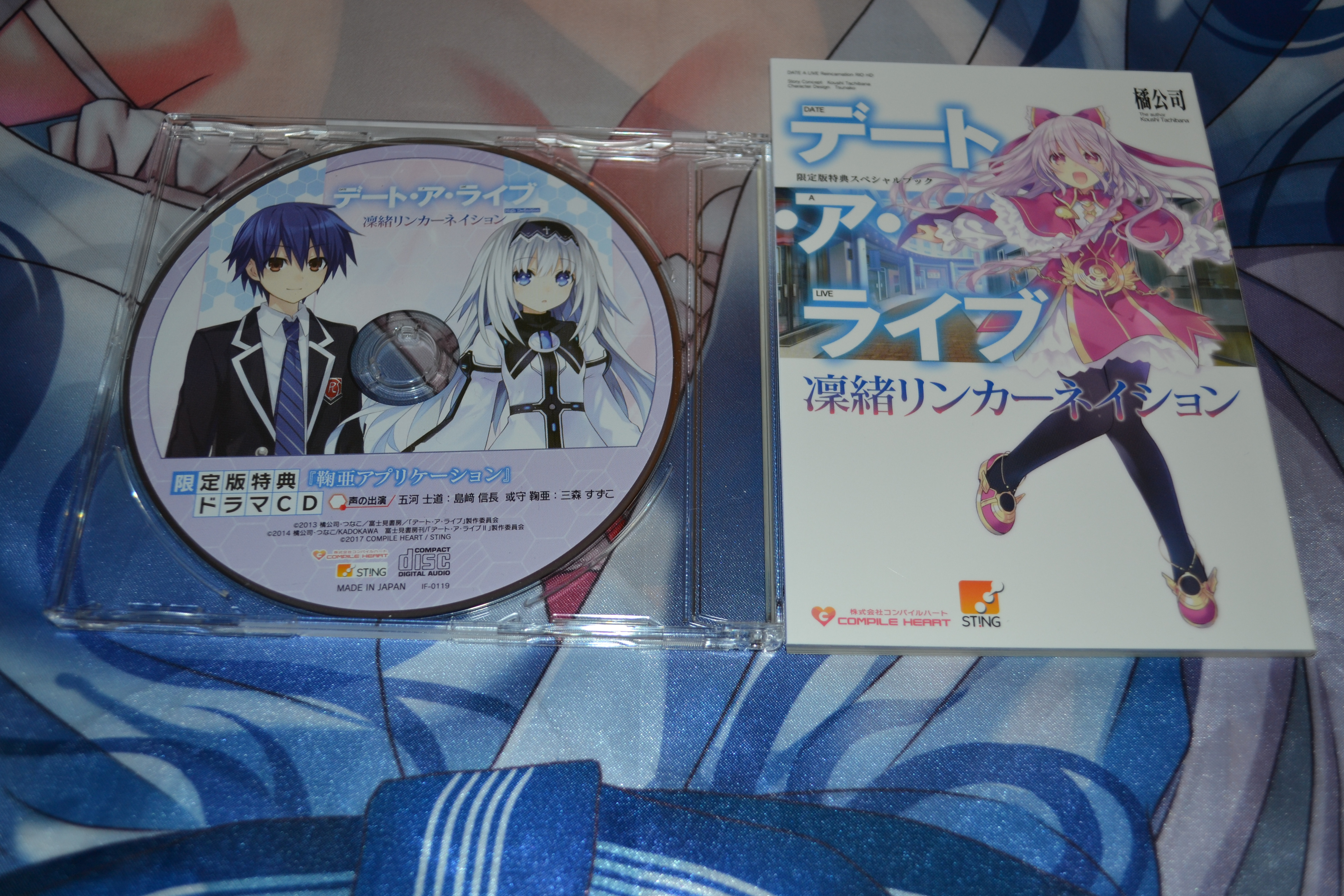 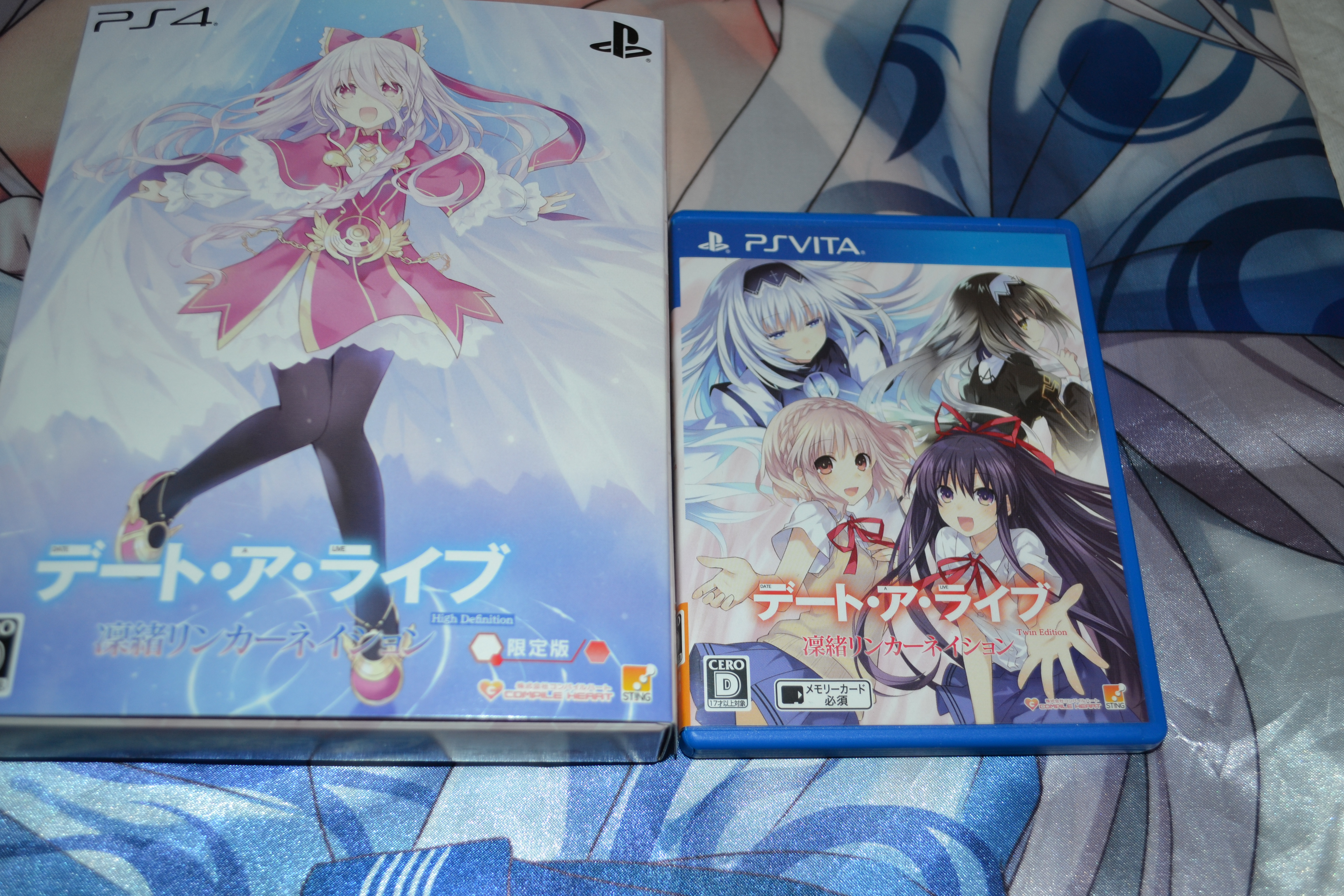