Imouto Paradise 2 (Imopara 2) is a nukige about an older brother and his five sisters, if this doesn't sound interesting to you it probably won't be something you will enjoy.

Imopara 2 is kind of a sequal to Imopara, all of the characters in Imopara 2 are children from the characters of Imopara with each of the sisters having given birth to a girl and one of them having given birth to a boy. Reading the original Imopara will not really give you much extra when reading Imopara 2 as there are only a few references to their parents and they aren't important, this means that just because it has a 2 in its name doesn't mean you need to read the first one before the sequal.

First a quick summary of Imopara 2. Imopara 2 is about a perverted older brother and his 5 little sisters Chiharu, Momoka, Ririna, Shizuku and Yuzu. Summer vacation just started and their parents are on an overseas trip. This leaves the siblings alone and opens up the chances for them to express their feelings for each other. As for how it plays out there is first an introduction and then you get an option to spend time with one of the sisters. Spend time with them means a sexual scene will happen and after a while you enter her route. You can also chose to just relax and stay at your room, after doing this for all the choices the little sisters become quite bold themselves and you enter the harem route.

Here are my thoughts on each of the little sisters

Chiharu was in my opinion the low point of Imopara 2. While her character design is really nice I found her personality to be really lacking. Her personality pretty much boils down to being energetic and quite bold. My main problem with her is that she is bold in a boring way, she is just kind of pushy when it comes to sex, but she really lacks a seducing wibe. Also because of how she takes charge of the sex scenes her brother doesn't really manage to do much else than react to things she does and as such the dialoge between them during sex as well as outside of sex just felt hollow. As for the sexual situations there are a lot of risky scenes as well as public sex scenes, as for the scenes themselves I think they would have been good if not for the dialog problem I mentioned earlier. As for her story part I felt like it was a bit too much of a mood shift and didn't really think it fit in with her route that well. Also another part of her personality that I forgot to mention is that she loves manga and games and have a lot in common with her brother, though the problem here is that they pretty much didn't do anything with it which I think it quite sad since I think those traits would have made her route much better if this part of her setting was actually used. So in conclusion I think Chiharu has a pretty bad route, though she does have a lot of good looking CGs.

Momoka is the little sister who takes care of everything in the house like cooking and landry and she pretty much acts like a mother to all her siblings while their parents are away. She loves baking and eating sweet things and her personality is pretty much just as sweet as the things she eats. I personally just found her to be really damn adorable and in terms of wife material I think she is top tier. I think Moonstone just really nails it when it comes to pink haired deredere heroines as I also liked Rise from Princess Evangile and Aya from Imopara. She is quite stright forward from the first sex scene onwards which I didn't really expect and her route is the most romantic one with them becoming a couple pretty honest about their feelings pretty early on. As for the sex scenes she starts of not really knowing much but still being very curious, which I found adorable and as it progresses she reads up on things related to sex so that she can learn how to better please her brother (though she also makes sure that she also gets to feel good herself). Her chemistry with the her brother is really good and they make an adorable couple. So ye in conclusion I really loved her route and I think she was just a delightful character, also I really liked her ending scene.

Ririna is quite an obvious tsundere as well as a closet pervert. Her normal interactions with her brother is him saying some dirty joke and she kicking the crap out of him because of it. She is pretty much in denial of her love for her older brother and a lot of the first sex scenes involve her getting into sexual situations where she pretty much tries to make it seem like he is blackmailing her and she is just going along even though she often either make the sugestions herself or takes his jokes literally while choosing to ignore him while he tries to clear up missunderstandings. Her sex scenes usually starts with her acting strong, but losing herself to plessure as it goes along, while I found it to be quite nice in the start it did end up feeling a bit repetative. As for her chemistry with her brother I would say it is quite nice and I think her route does a decent job of building their relationship during the route. One negative with the route though is that I found the comedy to be a bit weak, this is a bit unfortunate as I think the comedy is one of the strong points of the Imopara series. Also there were some odd translation with the word vagina being replaced with the word sex, translation otherwise was good but this was just really odd. As for what I thought of her route as a whole I would say pretty decent, it has its strong points with character interaction and romance building, though it suffers from weak comedy and feeling repetative.

Shizuku is a bookworm who pretty much only focuses on reading odd books related sex. She is very open about her love for her brother as well as openly sharing the strange sexual knowledge she finds out. As for her route it focuses on her wanting to control the ejaculation of her brother as she found something about improving health through a healthy ejaculation schedule. Using this she does sexual things with him causing him to come 2-3 times everyday without him being allowed to masturbate. Her route is generally just bizzare and some of the things she says are also just really bizzare and funny. During the sex scenes I think the dialog is really good as she says so many things that spices things up and keep it from feeling boring. In general there is just a really good mix of comedy and sex in her route and I think that her route can be considered the best in terms of being a nukige.

Yuzu is the loli of the sisters, while she is the same age as the other sisters she is way smaller than them and she also acts quite childish. Yuzu is quite harsh towards her brother and often insults him, though he often deserves it as he really likes to tease her. As for the character interaction I think it often leads to a lot of good comedic moments and the character interactions generally amused me. When it comes to the sex scenes she is often in situations that try to focus quite a lot on her childish looks and childish nature (basically it is mainly targeted towards lolicons). So if you like loli character in eroge you are very likely going to like her route, if you hate loli and think it is pretty much CP well this will probably not be something you will enjoy that much. Myself I am pretty much indifferent to whether the characters are loli or not though there were a few times I felt like it kind of went a bit far with the loli stuff and was kind of creepy. Other than the fact that the scenes tries to appeal to lolicons I would say they generally have good dialog and that there is nice variation in the sex scenes with the different fetishes it focuses on. Overall a pretty good route though some slight negatives for me for being too loli focused, though some people probably love that.

The harem route I found to be quite nice as it features a decent amount of interesting positions as well as combinations of the sisters which spices up the scenes. The main thing I love about harem routes is how the girls interact during the sex scenes and I think it did a good job at it.

Overall I would say that I found Imopara 2 to be a really nice read. While Chiharu's route which was the first I read set my expectations low the other routes more than made up for it. As for how I would rate the routes it would be Chiharu (bad), Ririna and Yuzu (quite good), Momoka, Shizuku and harem (really good). I really liked the comedy in most routes and I think this is one of the strong points of the Imopara series, the comedy is in general based on just how absurd some of the things they say or some of the situations they are in are, since I really like absurd comedy this at least made me laugh quite a lot. As for the sexual part of it I would say it does a really good job having quite a nice variation of sex scenes and doing a good job of using settings that suit the different characters. Also one thing I really loved is how they often have sex in risky situations where other sisters could potentially find out (in some cases they actually do), I think this adds a nice sense of excitement to the scenes and also I found it really funny when it is later revealed that they were seen during a specific sex scene. As for the art I would say it is a clear improvment over the original Imopara and that the art is really nice looking and quite consistantly good. The sound I found to work quite well for the most part, though I seem to remember thinking one of the background musics during some sex scenes didn't really work that well.

The front of the hardcopy 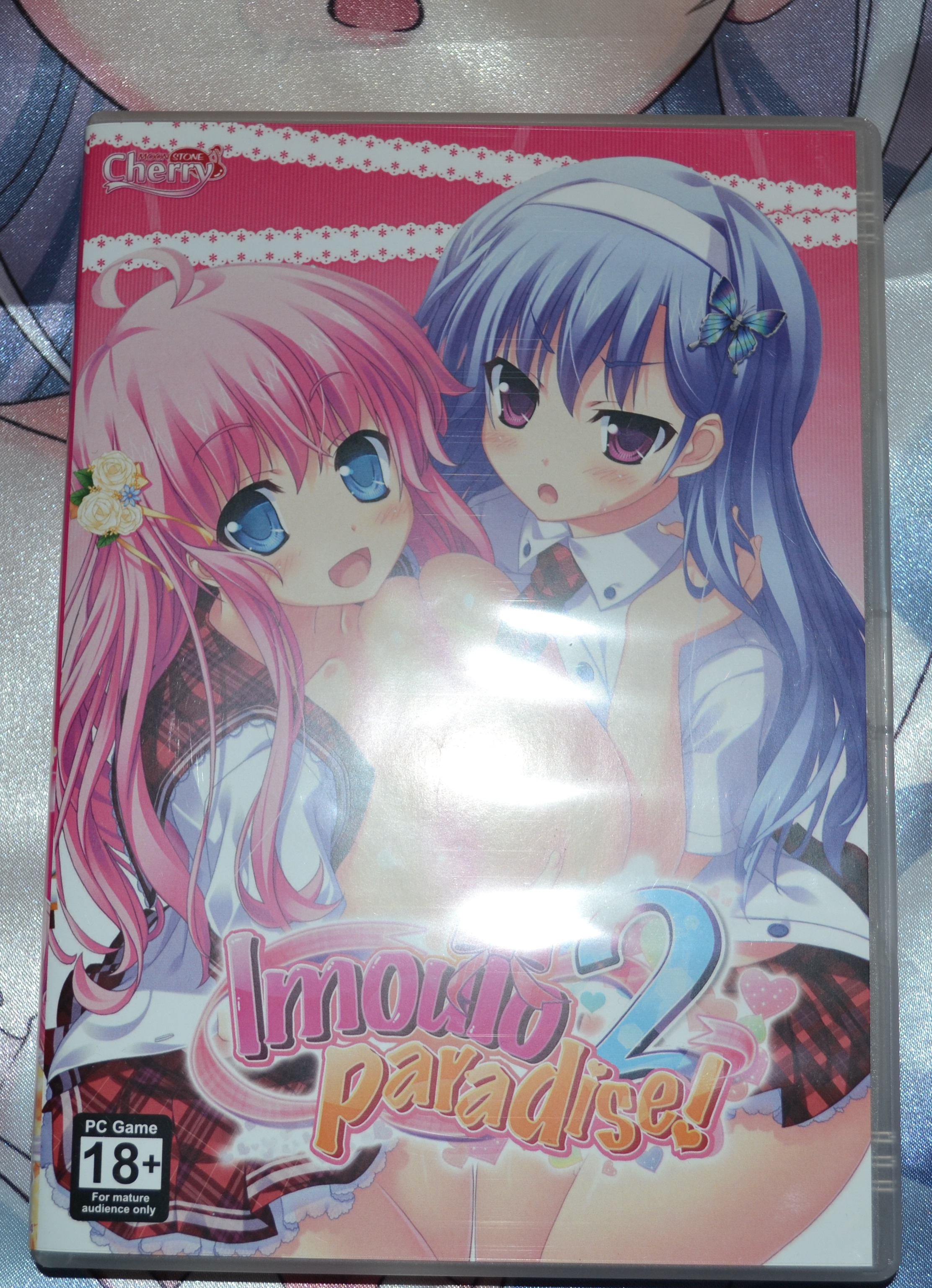 Back of the hardcopy 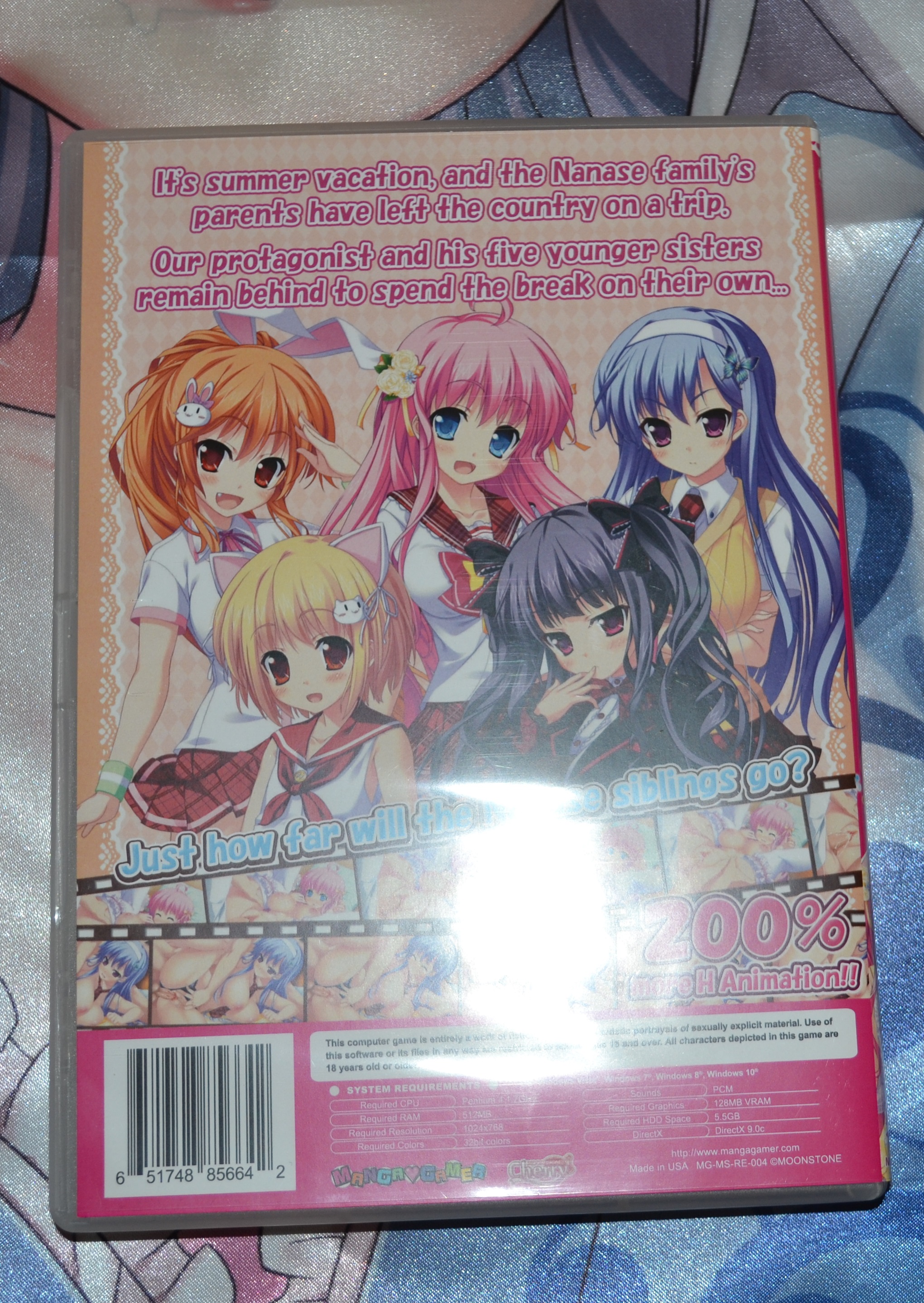 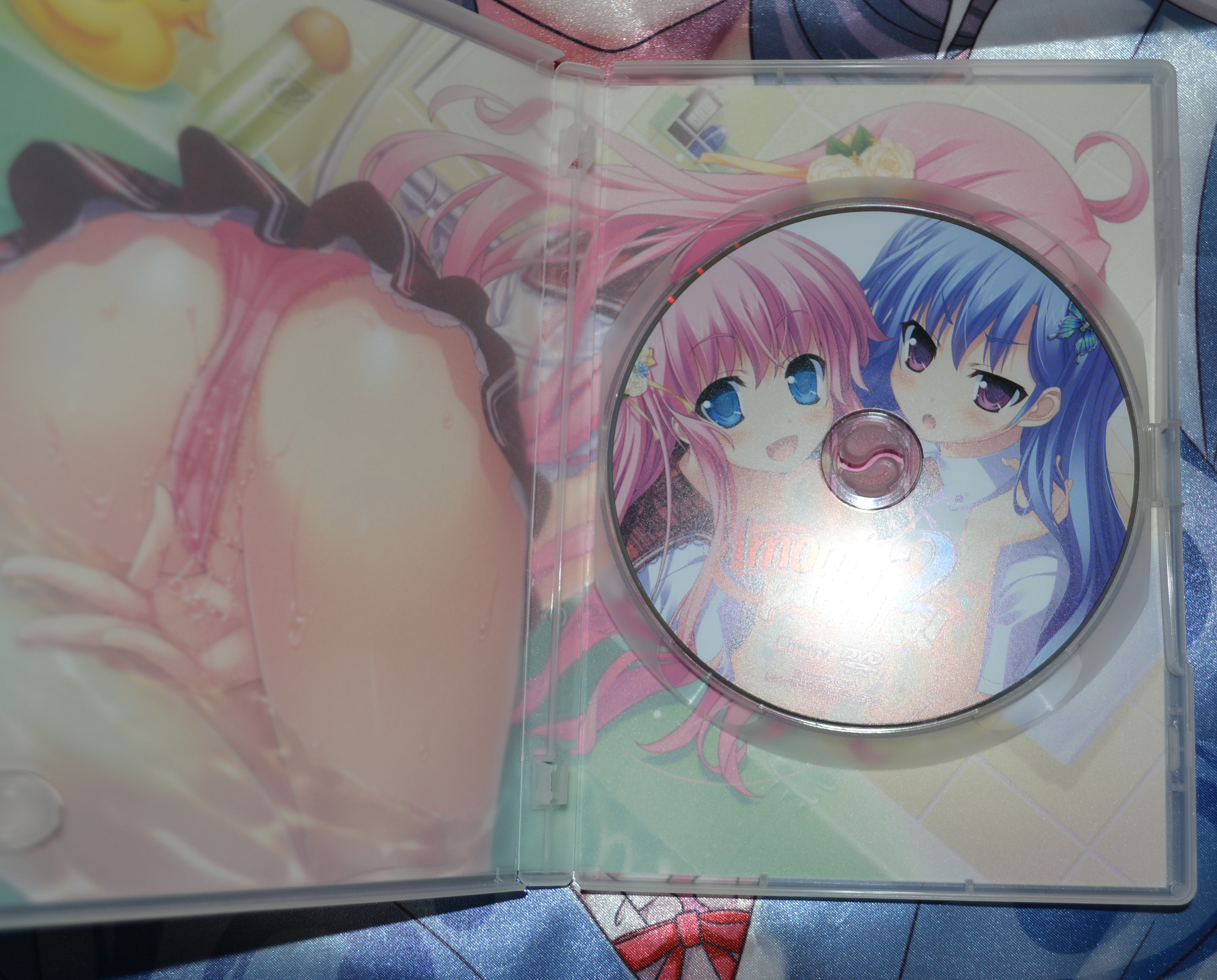 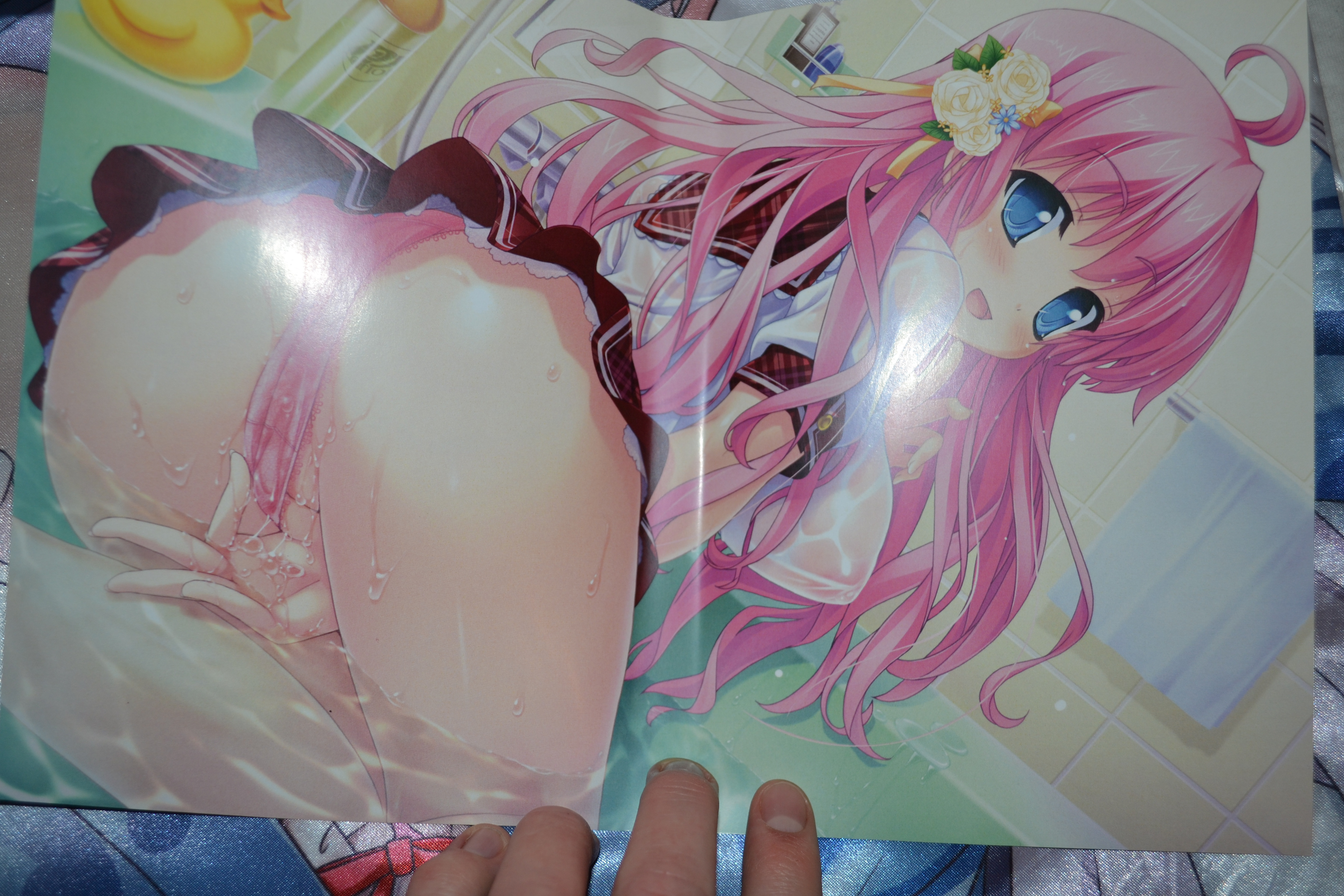 The physical release is quite standard though it is nice that they avoided having Yuzu's sex scenes shown on the back as that probably could cause some problems during import. Also one thing I think is really cool was that when I installed it from the disc I got the options of whether or not I wanted H-animation or not and whether I wanted mosaics or not. Adding extra options like those is pretty nice, I myself decided not to have H-animation since it looks kind of grainy and I also want to have screenshots of all the CGs in the VN which I couldn't do with H-animation on.