Over a few years now I have read some japanese VNs on the PS vita that are based on series that already had an anime before the VN. These VNs are Gochuumon wa Usagi Desu ka?? Wonderful Party!, Himouto! Umaru-chan Himouto! Ikusei Keikaku, Nisekoi: Yomeiri!?, Sakura-sou no Pet na Kanojo, and To Love-Ru Trouble Darkness: True Princess. Since I have the physical version of all of them I figured that I would do a review of them, however it has been a while since i read them so I don't think I would be able to make a proper review for each of them without rereading parts of them. As such I decided that instead I would do short reviews of each and put them all in one blog entry. By the way these titles are aimed at people who have watched the anime or read the manga.

Gochuumon wa Usagi Desu ka?? Wonderful Party! is in my opinion a good Gochuumon wa Usagi Desu Ka? VN. It does a great job at properly representing the characters as they are in the anime (haven't read the manga) and manage to execute well on the relaxed atmosphere found in the anime. The main story of the common route is that Kokoa wants to make a surprise birthday party for Chino, after this the character that interact most Kokoa (who you play in the common route) will be inspired to themselves hold a party chrismas for all of the other girls. The main thing then is how each of the girls thinks about how best to hold a party and what will make the other girls the happiest. There is also a mini game in the common route where you play as Kokoa working at Rabbit House, this is quite short but can be annoying when you just want to get into another route. I also want to mention that I prefered it to the anime as many of the jokes in the anime seems to be too slowly phased and therefore become boring while they work pretty well in the visual novel. One thing I should also mention is that it of course feels quite childish which is to be expected since the series in Gochuumon wa Usagi Desu Ka?

Himouto! Umaru-chan Himouto! Ikusei Keikaku managed to surprise me by being better than I had expected. It released before the 2nd season of the anime, but I would say that the general vibe of it is more similar to the 2nd season rather than the first season, something that I think is a good thing, btw didn't hate first season just thought the 2nd season was better. As for the common route I would say it was pretty decent and had some nice comedic moments, really liked the interactions between Taihei and Alex. As for the routes I would say those were the highlights of the VN. There are 3 different Umaru routes, one for UMR, one for her chibi form and one for her outside form as well as a route for Ebina, Kirie and Sylphinford. The routes did a good job at telling a story (mostly focusing on the relationship between siblings, not the incestious kind) and the comedy was what you would expect from Himouto Umaru (Sylphinford had some amazing comedic moments). Also after the end of the route there is an extra ending, this ending is just a few lines and a CG and tells what Umaru ended up as later, something that depends on lvling stats in the common route (just give her items that she use to lvl skills and have her use them). Again this is an annoying mini game and you probably need a guide to find out the stat combination needed for all the extra endings, but at least I think the extra endings are quite fun even though they are really short.

Nisekoi: Yomeiri!? is the first VN I ever read and where my profile picture is from. As for the VN itself I think it is really good, though it could in part be nostalgia since it is the first VN I read. The VN starts with Raku encountering a loli fox spirit named Otama who I would say works as a mascot for the VN. After the introduction you get a map of the school and of the city and then use that to choose who you want to have events with, after a few normal events with a girl you get a larger event that lasts longer and has a bit more impact and you continue with this until you get to the last event which can probably be considered her route. Each of their routes start with the girls going to the shrine connected to Otama and making a wish, Otama then fufills this wish in a way often not really expected or thought through by the one wishing it, thus creating a suituation that needs to be solved. As for the routes there are 6 in total, with 4 main routes that are romance focused one for each of the main heroines Chitoge, Kosaki, Marika and Seishirou and then extra routes unlocking after you have completed a route, one being the Ruri route (not romance but mainly about not making her hate you as Shuu involves you in things that piss her off) and the Raku route which can be considered the harem end, or rather the end where nothing happens. Chitoge's route is really emotional and something I think would fit in a nakige, Onodera's route is very nostalgic having many references to the main series while the other routes mainly focus on comedy (found most of them hilarious). As for gameplay there are a few minigames where you have to avoid being seen by someone (often the gangsters), then there are a few times where you get a few different hiragana that you need to combine to make a word that is your answer to something and lastly there is a health bar which mainly go down if a certain character gets mad at you and punches you or you eat something you shouldn't. I feel like these are the best implemented mini game systems I have seen so far in these kinds of VNs and while these unnecessary minigames that slow you down when you want to read other routes are annoying this one didn't feel all that annoying and a few times actually worked pretty well within the story. Just to end this of I wanted to say that it does a really good job using the characters to their full potential and that anyone who is a fan of Nisekoi, has a PS vita and know japanese should pick it up.

Sakura-sou no Pet na Kanojo is something I am a bit more mixed about. On one hand it does a pretty good job with the characters, comedy and story and on the other hand the art is kind of plain (colours are pretty bland) and the gameplay system is really annoying (the most annoying I have seen so far) which I think is somewhat detremental when doing the different routes. The general story is about the people at Sakurasou starting to work together on a game for a game competition. How this plays out in the VN is that you spend time working with them and depending on who you work with you end in their route, though you also need to ensure that all of them manages to get their required tasks done and I found it to be a bit more complex than it sounds. Other than that there are lots of scenes with the different people at Sakurasou as well as a new character that was the one who got them to enter the competition. As I mentioned I found the comedy to be well executed and the characters to be handled well so these scenes are pretty fun. As for the endings there are only endings with Shiina and Aoyama, though there are 3 variations for each of them which I think just depend on how many times you cleared an ending with them (bad type first time, better 2nd time and the best the 3rd time). They have also built in a stupid new game+ thing making it so you have to complete it from scratch to get the better endings, other than that there is an event for each character that includes a CG that requires you to go through each of the 6 routes twice meaning you have to go through it and the stupid gameplay system at least 12 times in total if you want to have all the CGs. In conclusion I would say it is a pretty good VN though it is held back by plain art with bland colours and a stupid system forcing you to go through the VN 12 times to get all the scenes while you navigate a semi difficult annoying system for each route.

To Love-Ru Trouble Darkness: True Princess is the only of these titles that I found to really be a disappointment. There is a wide variety in how good the routes are, some I would say are actually somewhat good while others are quite bad (especially Yami's route). While there is a lot of VN original content some of the scenes feel like pretty much a copy of things in the manga/anime just toned down due to it being on PS vita. The general plot is that that Rito loses his memory due to one of Lala's machines, then he spends time with the different girls and at the end of it he regains his memory after having gotten close with a girl and happy end. Other than some routes being generally poorly written and lending too much from the source matterial I would say a huge problem is the limitation it has being on the vita. Since To Love Ru generally rely on perverted comedy it can't really do as good of a job with it due to Sony even before their recent censorship crusade not really accepting anything as lewd as things found in the manga and anime. Other than this there are also some really annoying technical problem, for one all of the art has been compressed which is quite clear when comparing it to other vita titles, this makes it look much worse than it should have (art quality is pretty good), also one really annoying problem is that it seems it has memory problems, as you get close to having done all the scenes it just goes black everytime you try to save regardless of savefile and refuses to save after the VN is complete. This is a problem I found other people also had when I googled the problem in japanese though I didn't find a solution, as such I have  everything other than the ending CGs of the Nemesis route (at her ending part but won't save after the credits) when I have the memory card in and without the memory card I have done the Nemesis route so I could get all CGs, even though I don't have them all in the same place.

Front cover of the five VNs 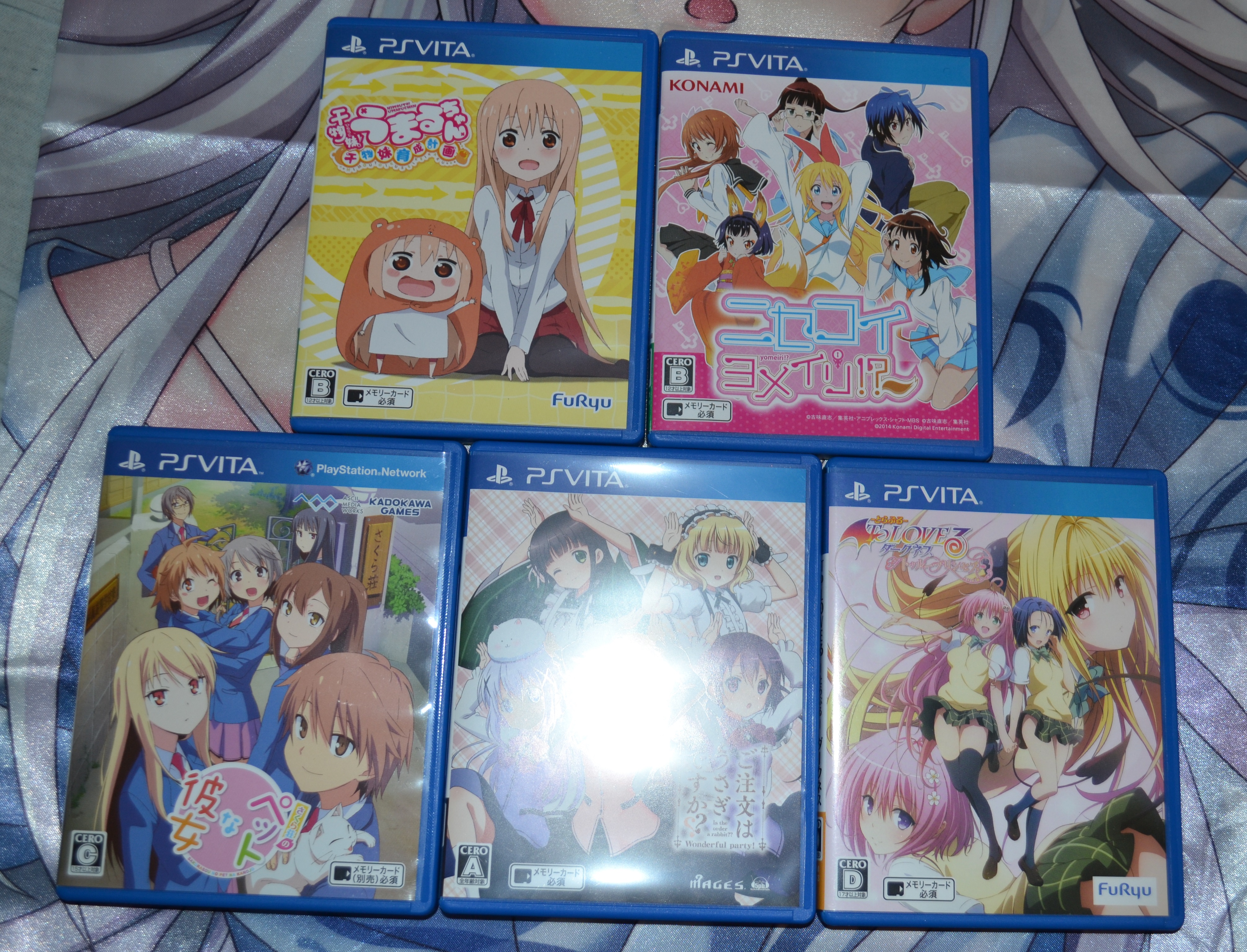 Back cover of the five VNs 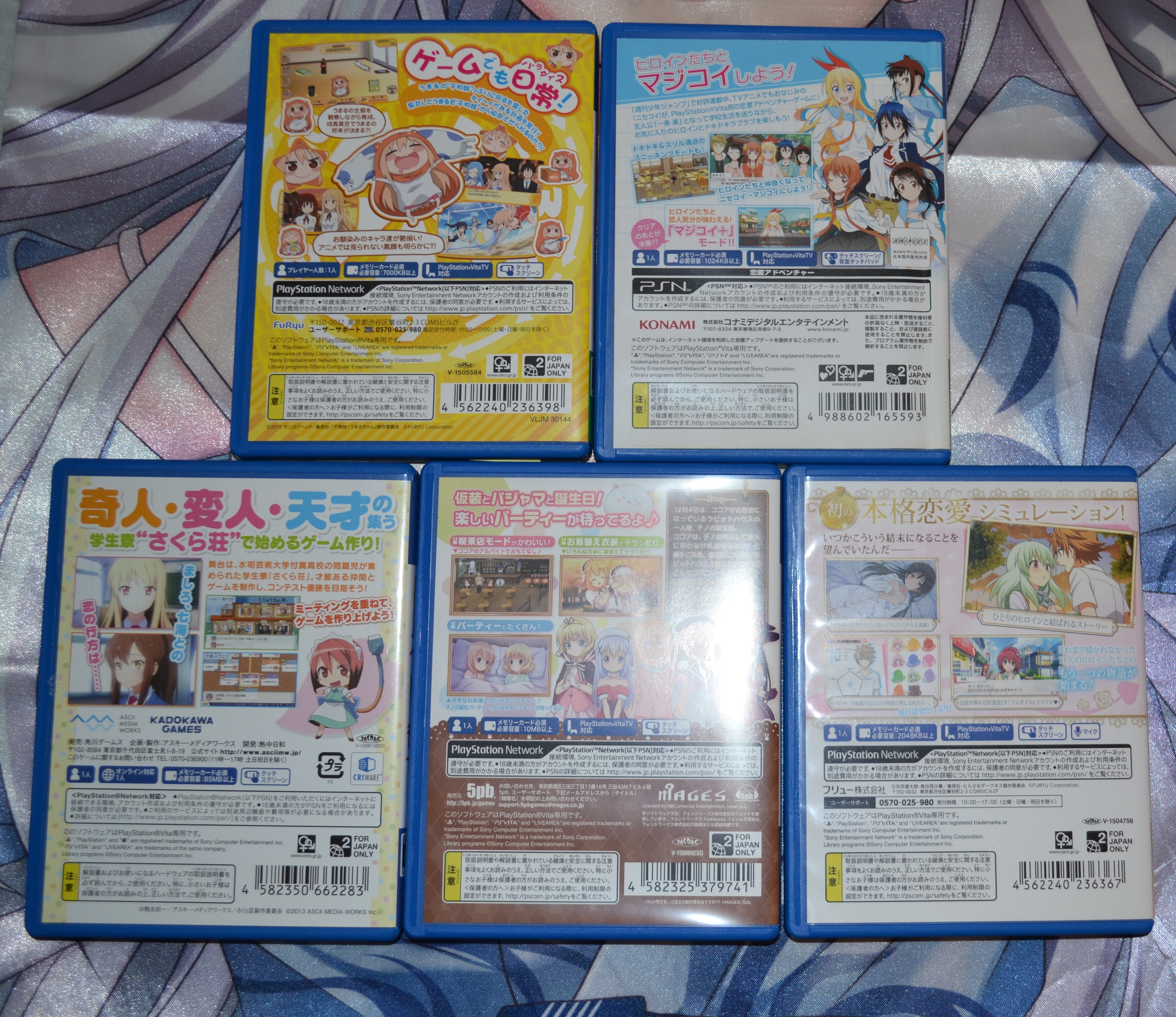