New Game! The Challenge Stage! is a VN based on the manga/anime New Game and I think having gone through either of them should be essential before reading this VN, because of this I will just assume that the people reading this is already familiar with the manga or anime.

Under here is the basics of how it is set up.

The common route of the VN covers roughly the two last months of development of fairies story 3. This is some point after Nene has joined as a debugger by the way so the status quo is already established. Since it takes place during this time there are some events in the VN that are the same as those that happen in the anime though most of the scenes are VN original. There is also an extra added story element which is that Aoba has been given the job of working as the art director of a DLC afterstory for Sophia (the first character she made), which seems to involve her getting resurrected. In this part of the VN there are mostly short scenes that happen as you progress through the days with it being more story heavy towards the end of the common route when they release fairies story 3. After this there are eight different character routes following each of the different important characters in New Game, excluding those introduced in the 2nd season of the anime. These routes take place during a company vacation that last 3 days and take place either at Hokkaido or Okinawa with 4 character routes each place. The one in Hokkaido is a bit based on the OVA where they go to Hokkaido though I don't think the Okinawa one is based on any existing material, but I have only watched the anime so I am not certain it isn't in the manga.

Now with the general structure of the VN out of the way I guess I can start with what I thought of New Game! The Challenge Stage!

To start with I would have to say that I quite enjoyed New Game! The Challenge Stage! with the reason being that it does a good job at handling the different characters of New Game which is an anime I love. The common route of the VN is what I found to be the least impressive, in this part there is a gameplay element of choosing who to work with to get stats in their part of the game development which is then used to complete the DLC story and also start events with the different characters as well as determining the route you end up in. While the system isn't too bad the first time you play through it, it gets rather annoying when doing all the routes since you have to go through it 8 times and all it does is slow you down. The scenes during the common route are rather short but the interactions between the characters are rather nice and does a good job at capturing the same charm as the anime. Other than choosing who to work with there is also the weekend where you can choose between 4 of the characters on saturday and the remaining 4 on sunday and have events with them. As for the later part of the common route, well that is rather heavily based on the later part of the first season of the anime since it covers the release of fairies story 3, it does a decent job mixing the suituations with a few choices to keep it from not feeling completely the same.

The character routes were in my opinion rather good. All of the different routes has a completely different story and all manages to do a good job at handling the characters and making interesting interactions between them. As for the stories themselves none of them are really that deep, instead just telling smaller stories. Some of them focused mainly on comedy and some of them focused a bit more on something a character was worrying about though all of them fit right in with things I would expect from New Game like keeping itself energetic and fun. As for the end of each route I would advice anyone who wants to read it to not expect much, the routes end with the vacation ending and either a short nice scene between the characters or with them being back to working again. There is also an extra ending at the end which is based on the stats you got during the common route where I think you need 225+ or 230+ with different stats to get the different endings. These extra endings are rather short and pretty much just tells what Aoba end up doing after some time, things like for some reason becoming a programmer or game director, I personally just treat these as some nice what if scenarios with nice artwork attached.

In conclusion New Game! The Challenge Stage! is a good New Game VN that manages to capture the characters and the feels showed in the anime. The common route has some rather annoying gameplay mechanics that seems unnecessary and otherwise have short but still fun scenes between the characters when they are working. The character routes are all smaller stories without much impact but does a good job at being entertaining which I think is what their aim should be.

The front of the regular physical edition 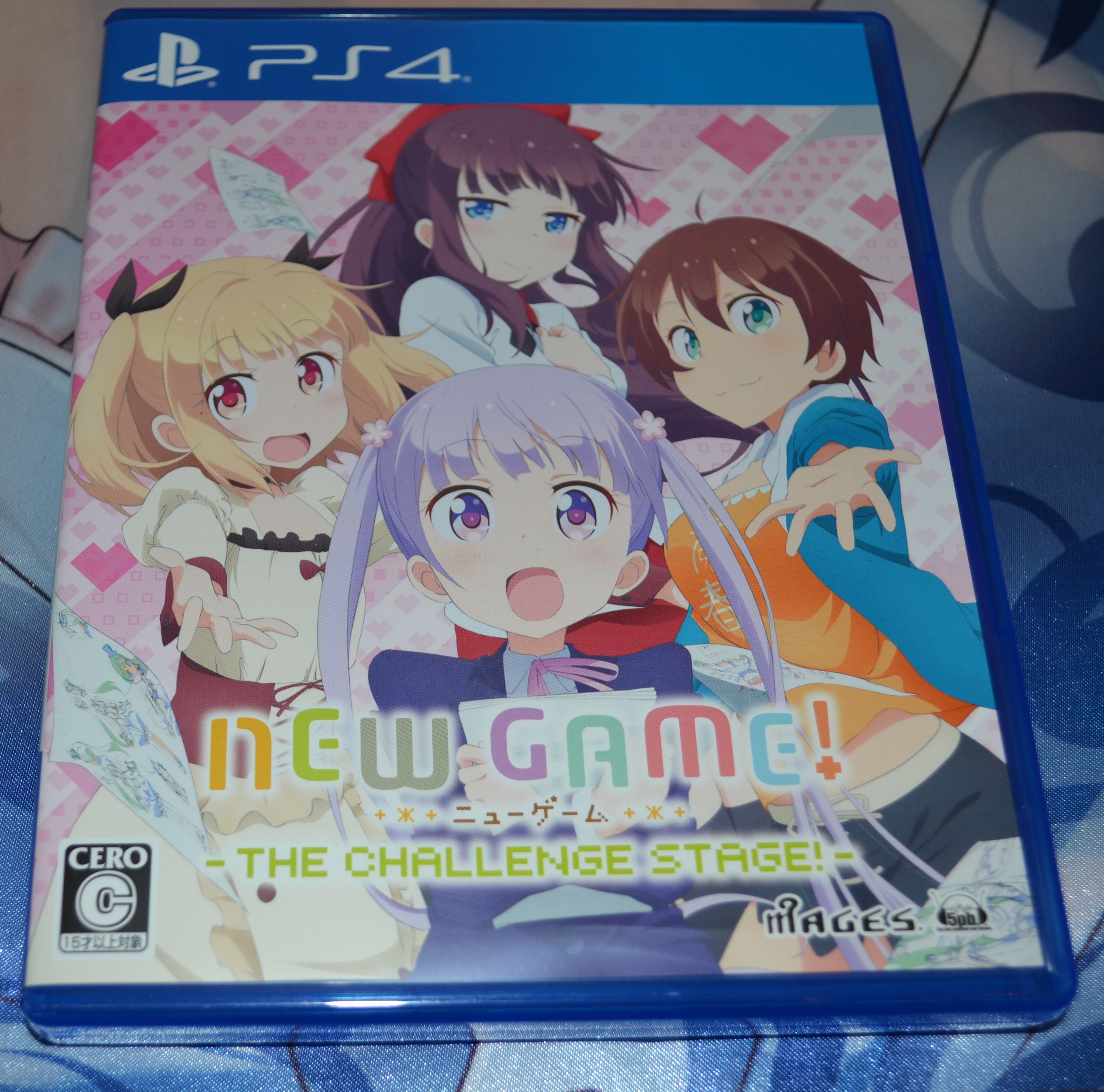 The back of the regular physical edition 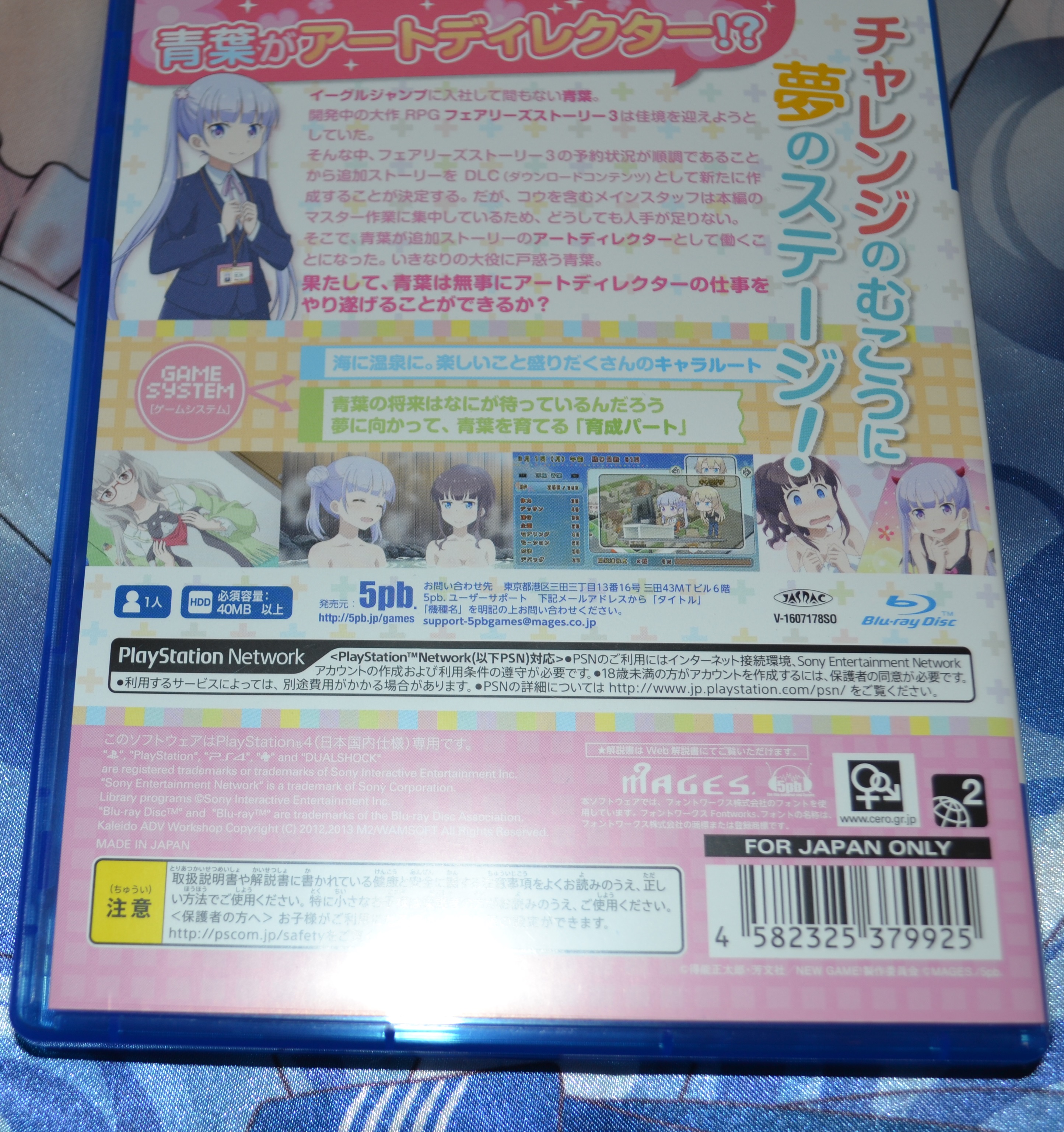 The disc as well as a DLC code for bunny costume, don't remember if it was pre-order bonus or first print bonus. 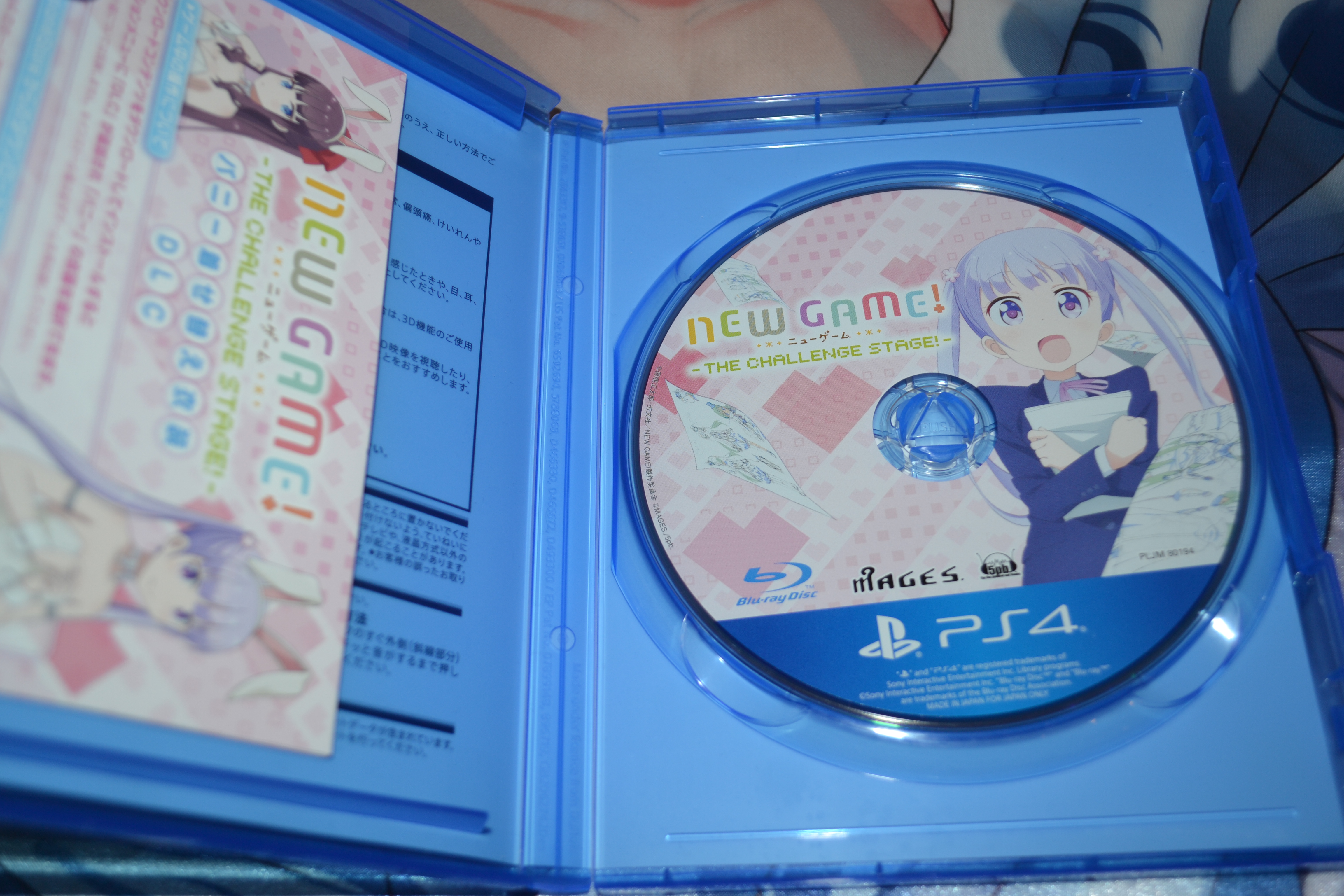 Not much to say about the physical edition itself as it is just a standard PS4 case. The only thing to really comment is that I think the cover looks quite good.