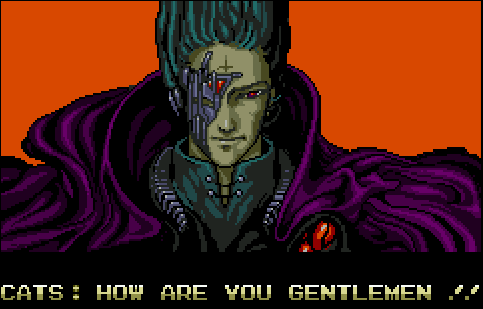 Yesterday I posted a translation of the opening scene to Dark Blue, a short murder mystery VN with netorare elements. I received largely positive feedback, and not surprisingly the topic of making this a full-fledged project came up. My response is as follows.

I have confidence in my (English) writing skills, but not so much in my translation skills. As anyone who's seen my writing in the Japanese chat game thread will realize, my knowledge of Japanese grammar is actually pretty terrible. A Japanese sentence to me is essentially a puzzle of words that I painstakingly piece back together to arrive at an overall picture that makes sense. The basis for my translations is logical reasoning rather than understanding of the language. When I have no context to reason from, I'm essentially screwed (which thankfully doesn't happen much in VNs). My Dark Blue intro scene translation turned out pretty well (which is why I posted it), but any real project would definitely require a translation checker.

I have mixed feelings about the "value" of fan translation projects (as a creator rather than as a consumer). For one, there's too many highly critical people around who judge fan translations based on professional standards and use this as justification to belittle people's effort. As I see it, once you're at the level to satisfy such people, there's no reason to translate anymore because the main impetus to translate is personal development. Trying to satisfy such people invokes stress and anxiety I associate with a job, not a hobby. Second, translations lack creative value. Translation is a form of mimicry; the result will necessarily mirror the original, and therefore a translation never truly belongs to the translator. Those who can, create; those who can't, translate. If I'm going to devote a ridiculous amount of time to a writing project, I might as well write my own original story, which no one will ever complain about (if made available for free) and which I have full rights to sell somewhere down the line.

As I see it, there's two main reasons to fan translate a VN: personal development (of one's Japanese abilities) and social recognition / status. In the current high-scrutiny / low-recognition environment, I just don't see the value in committing time and effort into a project that could take years. It'd be nice to do something useful to others while working on my Japanese, but any VN longer than a couple of hours would simply be too much work for too little benefit.