For me only Fuyukara, Kururu. makes a stand in September. 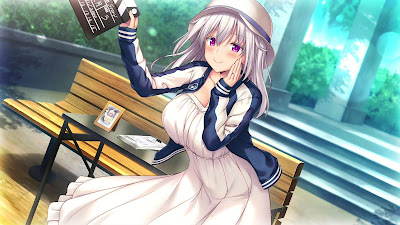 The protagonist Kayabuki Akira is troubled by the fact that he has no dreams.
After an unfortunate accident in which his apartment was trapped under a fallen tree, he was forced to leave where he was living and was introduced to a rundown apartment called "Shoufuku-sou" with a rent of 20,000 yen as a temporary residence. However, his misfortune is far from over.
On the night he moves into the apartment, the wall connecting his room to his neighbor collapses due to a noise problem he caused. Until repairs are completed, he is forced to live with his neighbor, Makimura Hazuki.
At first, they are confused by the unfamiliarity of living together (and with the opposite sex), but as they get to know each other, they lose their reservations and gradually grow closer.
One day, he is asked to help Hazuki with her hobby of making movies. The wheels of his lost youth slowly and quietly begin to turn.
Our usual single heroine vanilla nukige
2. SINce Memories: Hoshi no Sora no Shita de シンスメモリーズ 星天の下で [210916] MAGES. GAME 1 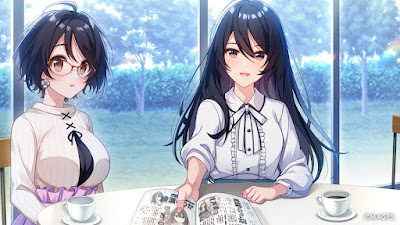 The story follows Mizumoto Jun'ya, a college student who works at his family’s general store Mizumoto-dou. The only thing in Jun'ya’s mind is the death of his older brother Takaya who passed away the year prior. He asks himself every day why he was the one that got to live while his brother passed away.
One day, Jun'ya meets a girl who tells him, “You should’ve been the one to die,” before vanishing.
Jun'ya ends up taking on the task of renovating a traditional Japanese manor belonging to the family of Houjou Chihaya, your typical flawless ojou-sama and who happens to be his childhood friend. Since he has no idea how to even start, he’ll need to get help from various people, and he’ll need to get out of his funk to do so. Jun'ya will also have to learn how to deal with all of the emotions and problems along the way. Will he succeed in renovating the old Houjou residence? And who was that girl who told him that he should’ve been the one to die? The fate surrounding the death of his brother will soon begin.
There are English reviews
3. Omoide Kakaete Ai ni Koi!! 思い出抱えてアイにコイ!! [210924] Hooksoft 1 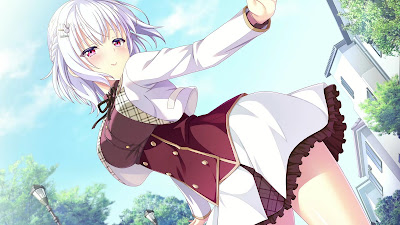 Spring, the season of encounters and partings. It's spring break, and Sakawa Haruki is about to go into 3rd grade.
His childhood friend group includes: Kuriyama Tomari, Tokorozawa Iku, and Sugou Chisato. 2 new girls just joined the group: Harunohara Yuuna, who lives in the next town over, and Nishitani Shizuru, who just moved into the neighborhood.
Ironically, at the same time these 2 girls joined, Haruki had to move away from home and his childhood friends.
During spring many years later, Haruki's father gets transferred to work overseas. Haruki decides to stay in Japan to concentrate on university entrance exams, and ends up living in an apartment owned by a relative. This apartment happens to be in the same town where he parted from his childhood friends.
Thus, the rails of fate cause Haruki and his childhood friends to meet once again.
Haruki was worried that the girls wouldn't accept him in the group like they did in the past, but despite the long gap, they were happy to see him and welcomed him back warmly. However, the fact that these girls have grown into beautiful women has caused Haruki to feel more embarrassed than happy.
As they reminisce about the past, filling in the blanks between the time they parted, he'll get to know them and perhaps enter into a relationship with one of them...
There is an English review
4. Einstein Yori Ai o Komete: Apollo Crisis アインシュタインより愛を込めて APOLLOCRISIS [210924] GLOVETY 1 2 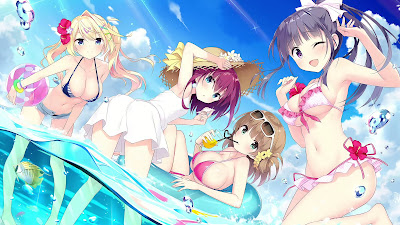 It's been about a year since he returned from Ogasawara.
It's the start of summer. Aiuchi Shuuta, who's now a third year at the academy, was lazily watching the seasons pass-- his carefree classmates, his peaceful day-to-day life... and his love who hasn't returned, Arimura Romi.
He simply vacantly watched and continued to wait.
And to him comes a letter from the head of the Comet Organisation's leader, Miko.
Once again, along with his comrades and the rest of the world, he gets caught up in their ambitions regarding the comet. The final summer was about to begin.
There is an English review
5. Planetarian ~Snow Globe~ planetarian～雪圏球～ [210903] Key 1 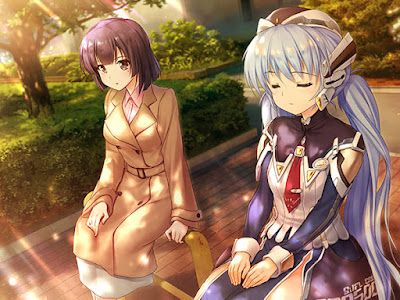 This story occurs before the events of the war that brought the world to ruin; at this point, Yumemi has been working at the Flowercrest Department Store's rooftop planetarium for about ten years. One day, Yumemi begins to act strangely, culminating in her simply walking out and wandering around the town. The staff of the planetarium are bewildered, and one of the workers—a woman named Satomi Kurahashi—is ordered to go follow Yumemi and bring her back. Before long, Yumemi begins to run out of battery power.
There are English reviews
6. Fuyukara, Kururu. ふゆから、くるる。 [210924] Silky's Plus 1 2 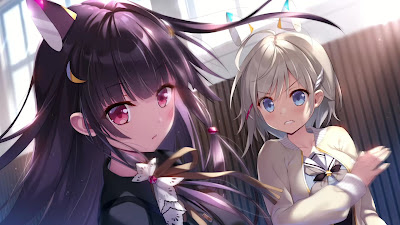 "Eh?
What do you mean that Shihon-chan might die?
Eeh? Shihon-chan's head has gone missing?"
It seems Shihon-chan's headless body was found in the meditation room.
"B-but, the neck can still be reattached within 48 hours right?
Eh? The head can't be found!?
S-somebody hid it? And you don't know who? B-but that's..."
A murder isn't unusual.
After all, there's at least one bloodthirsty killer at school.
Murdering people is fine and all but it's considered a taboo that must be never violated to decapitate and hide their head.
Because one can never be revived if so.
I can't believe someone resented Shihon-chan enough to kill her in a way that would prevent her from being revived.
If her head isn't found within two days, she'll really kick the bucket!
That's a reality I absolutely refuse!
Now's not the time to cry or be confused!
There should be something that I am capable of!
"That's something I haven't done yet but... I-I!"
I'll find Shihon-chan's head without fail!
"Say hello to the great detective, me!"
A boarding system school isolated from the outside world.
--And there do the immortal girls live.
The time it takes for them to become an adult is the same time it takes for them to deage and become a baby, they grow up until they become an adult once more and then do they deage again⁠—a cycle that's being repeated.
There's only one condition in order to graduate from school.
One needed to be deemed a prodigy by someone observing from the outside.
The moment that verdict be handed down, the girl's graduation would be recognized and she would disappear from school.
The immortal girls' peaceful school life would be greatly disturbed by a certain murder case.
Why are the girls immortal?
Why do they grow up and then age backwards?
How long were they locked up inside the school?
Why can they be resuscitated even if their heads are decapitated?
What happens to girls who were never deemed a prodigy?
What is happening in the outside world?
Why are there only girls?
Where are the males?
What does it mean to die?
What does it mean to live?
What is life?
For what purpose does life exist?
--the key to this case is a needle.
Wool needle. Knitting needle. Sewing machine needle.
Silk needle. Pongee needle. Gas needle.
Futon needle. Western-style clothes needle. Bait needle.
Marking needle. T-Pin. Triangular leather needle.
It is the needle that would weave the immortal girls' death.
There is an English review
7. Ore no Cupid ga Ponkotsu Sugite Kowa~i. 俺の恋天使がポンコツすぎてコワ～い。 [210924] Hulotte 1 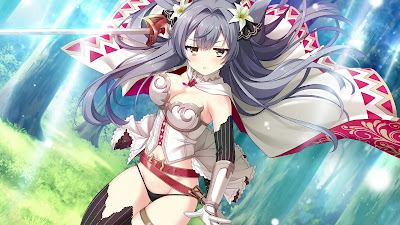 In the midst of an ordinary everyday life. About the time for the yearning for love to sprout.
I somehow was unable to take the first step. Such a day has come to pass.
"What's this thing?"
Before my eyes is a fallen notebook.
"Hey, hey, you there!"
"Why won't you try picking it up?"
A human in presence but not in appearance popped up in front of me.
What a strange girl.
"I am an angel of love! Got any girl residing in your heart?"
How suspicious no matter how you look at it.
I tried ignoring her to her dismay as she thrust the notebook at me.
"Love Note! This is called the Love Note!"
"It possesses the power to fulfill your romantic endeavors guaranteed!"
It seems that when you write down the name of your crush, it can gauge the destiny level between her and the current you and it can even provide you ways to improve that level.
"By the way, I'll even act as your assistant!"
However,
「 If the owner of the Love Note isn't able to find his destined bride-to-be within 90 days, his sex organ is forfeit. Nonreturnable. 」
"Which is why you should do your best, okay?"
Thus, while having the support of the love angel, I brandish the power of this so-called Love Note all in the name of fulfilling love.
There is an English review
8. Heroine wa Tomodachi Desu ka? Koibito Desu ka? Soretomo Tomefure Desu ka? Second 彼女は友達ですか？恋人ですか？それともトメフレですか？ Second [210924] DESSERT Soft 1 2 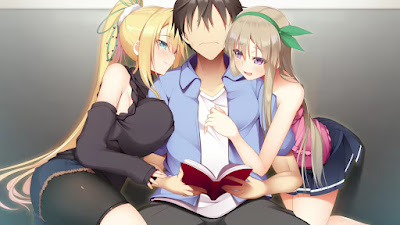 Tomefure is a new kind of friend relationship between students in which boy gives runaway girls in trouble free housing. Main character lives alone at a big house, so he goes to the site and opens reservations. To his surprise, all the volunteers are his beautiful classmates.
There are English reviews
BLOCKED