Time for another blog entry, and today I'll be talking about the dungeon crawler, Ikazuchi no Senshi Raidy. This is the first installment in ZyX's dungeon crawler series featuring Raidy, a very popular game series.

For those of you who aren't familiar with dungen crawler games, they are gameplay like titles featuring a dungeon that you as the player need to navigate through. Depending on the game, there might be random enemy encounters, bosses as you climb floors, secret passages, traps, loot and more. The actual gameplay is most of the time simply using the direction buttons to move your character forwards, sideways and backwards as you progress through the dungeon, as well as mouse clicks to fight possible bosses and enemies you encounter. In Raidy 1, you play as "the lightning warrior" Raidy, who heads into a tower controlled by a demon in order to save the nearby village from his evil. The tower has several floors, every one of which contains a mini boss, and your job is to move through each floor, kill the boss and climb to the next floor until you reach the demon himself, so that you can kill him and put a stop to his plans.

As you move through the dungeons, you will encounter random enemies, who will increase in strength for every floor. These random encounters award EXP, which will be cruicial for for your survival in the dungeon. (This game is seriously challenging, and if you are even just a tiny bit underleveled, you WILL die, which will result in a game over. Therefore, you often have to spend quite a bit of time on each floor after defeating the boss, just grinding a few levels so that you won't die instantly on the next floor. A bit more on the difficulty later on.)

The game actually came out in 1994, though the current version available on JAST's homepage has updated craphics compared to the original release. The current art is actually very pretty, which was a big plus for me as I played it, since I was expecting something much, much worse.

A random encounter in the dungeon 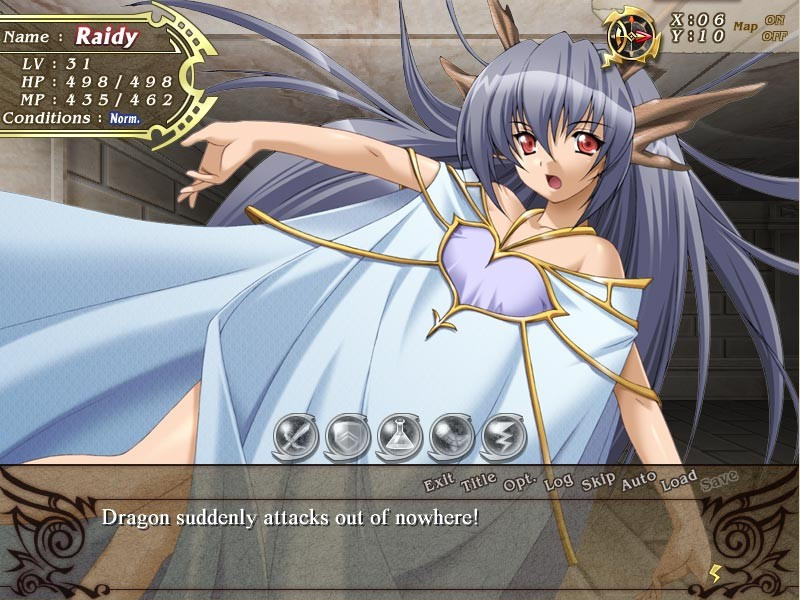 That being said, the audio in the game is quite bad. The quality isn't top notch, but the worst part is the absolutely cringe voice acting by Raidy... It's actually quite comical. She is extremely emotionless when she speaks, even in crazy situations, (like her being raped by a crazy werewolf... yes, this happens, lol.) I don't know for sure, but it seems to me like the voice acting is the original from the 1994 release, as that would explain the rather lacking quality compared to the new art. Still, this is just a tiny little detail, and it didn't bother me much at all.

Like I mentioned before, your goal is to defeat all the floor bosses in order to climb up to the top of the tower and kill the demon, but this is not a simple feat. Each floor introduces new traps and labyrinths which are seriously difficult to figure out without a guide. I personally played the whole game without a guide, something that took a long time considering the actual length of the game. I spent a long time grinding for exp, walking in circles through the mazes and getting stuck at certain traps, (like the freaking evil 180 turn pad, which turns your character 180 degrees without you noticing, making you walk in circles forever unless you figure out the trap, or turn around by chance.) Traps can feature many different things, like chests rigged with poison gas, invisible walls, turn pads and so on.

As you advance through the dungeon, you will be completely blind, and you have to memorize where you came from until you manage to find the floor map, which usually lies hidden quite far into the dungeon. The map will let you see an overview of the current floor, and it's a huuuuge help when navigating, though finding the damn things can be a pain. You do have a compass, which is very helpful, as you can use it to somewhat get a grasp on where you are at all times. 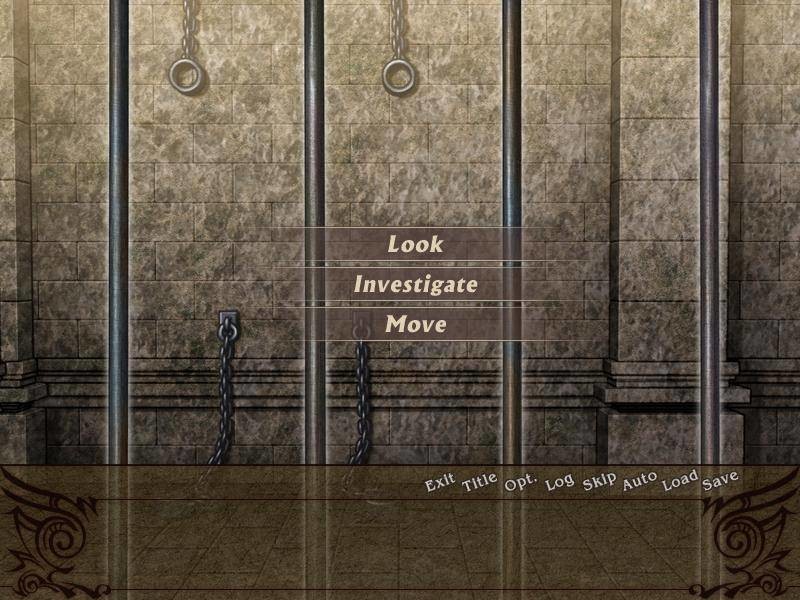 You will eventually discover certain rooms and points of interest, wchich will give you screens like these. You will have to click each option several times in order for figure out all the information you need, (so if you are talking to a prisoner in a jail cell, you might need to select one option up to 5-6 times in order to get the correct info out of them.) This is very important to remember, because every mini boss will be invincible until you have learned their weakness. This means, if you rush into the boss room, you have absolutely no chance of winning, and you will get a bad end, and a bad end rape scene. (If you want to 100% the game, you do have to get these, so saving before entering the boss room, just to unlock the scene is recommended, so you don't have to go back to get these again later on.) Also, on that note, there is 1 secret ending in this game, which you can only get if you 1) collect all the information on a boss, save, then try to fight them but lose, get the rape scene and then reload the save, then defeat them. (An instant defeat becuase you didn't know their weakness won't count.) I'm mentioning this because actually going through the whole game again just to do this will take hours, and it's quite a grind just for 1 new scene, just keep that in mind if you plan on playing this game. - Get info, save, fight and lose, then win, repeat for every boss.

Now that we mentioned that, it's important to point out, rape is a core part of this game. (The mini bosses are capturing villagers and rape them, when you lose to a boss you get a rape scene, and when you defeat a boss you... rape them... yup...) So yeah, do not expect any vanilla H in this game, because you won't find any of it. Oh, and... 95% of the game is yuri. (Yay!)

Earlier I talked a bit about the difficulty in this game. Traps, mazes, strong bosses and all that makes for a really crazy combo. Honestly, the difficulty in this game might be a bit too high for certain people. I personally love a challenge like this, and had a blast playing through the game, trying to figure out how to beat the next floor, and the 2-10 hour game felt like a much longer one, because of the amount of time I spent in game. The thing is, the actual scenes and VN elements are rather short, and you will be spending most of your time in the gameplay, defeating enemies and searching for loot and clues. Therefore, it is important that you find these elements in the game entertaining, or else this will be a real chore to get through.

The combat system in the game is very simple. You can preform a normal attack, block, flee or cast a magic attack which consumes your mana. Your normal attacks deal less damage than the magical attacks, but are more consistent. Both you and your enemies can land critical hits, which will do loads more damage than normal, so it's important to keep your health up with healing potions.

The block feature is mainly there so that you can lose on purpose if you want, (all you do in that situation is walk into a boss room, spam the block button until you die, so that you don't risk killing the boss.) The magical attack does more damage the more mana you have, and becomes rather unreliable as fights drags on, but can be cruicial when it comes to weakening bosses, as the first 2-3 hits can be quite strong. One thing I have to mention here is... save... A LOT! Save all the time. If you die to a boss, it's game over, and you have to start all over, or from a save point. If you forgot to save and went on playing for a while, getting back that progress can take ages, and it can really make you ragequit. 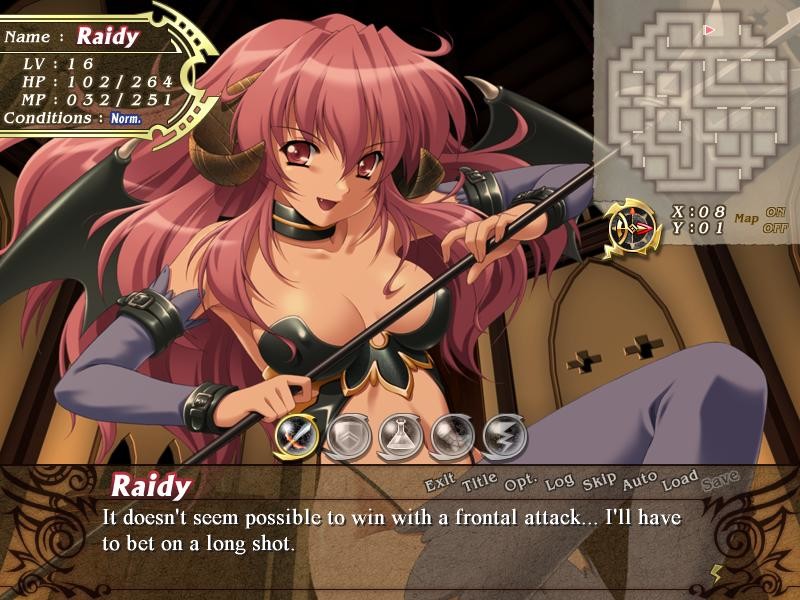 I think that about covers everything that needs to be said about Raidy 1. It's a very enjoyable game, especially considering it's age and limited length. The art is really pretty, the gameplay is fun and challenging and the characters are all pretty cool, (though again, Raidy's voice actress is literal cringe.) You can buy the game and 2 of the sequels over at JAST, (here.)