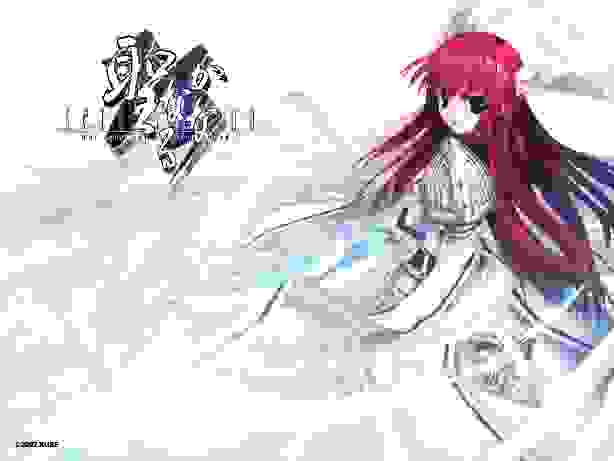 Peter Payne, owner of VN publisher JAST and the J-List empire, made the following comment in their official forums:

...it's a challenge when games are big and expensive. One thing we're not too happy about is the way RPGs take 2-3x the resources yet sell about as well as any other game. While we've released some nice ones, and have an amazing game coming out soon (Seinarukana is nearly read to start promotion on), unless we can see increased interest by fans it'll be hard to choose another one in the near future.

JAST has released several RPGs over the years, including the Raidy series, Brave Soul, Aselia the Eternal, and most recently Yumina the Ethereal. JAST has said hinted before that the Raidy series did very well for them, and they seemed quite eager to work on Raidy 3, so I'd infer that it's not included in this assessment. Brave Soul was heavily pirated, as evidenced by the repetitive posts in the old forums asking how to save (which was explicitly outlined in the short paper manual that came with the game). The release of Aselia the Eternal was mired by issues, including a widely available fan translation patch, JAST's decision not to release a version with the original 18+ content due to concerns about the sexual portrayal of children, failure to pursue a Steam release, and the fact that by the time JAST got around to releasing it 8 years had passed and the game's graphics (640x480) and battle system were horribly dated. I previously discussed how Yumina the Ethereal's marketing was poorly handled, although eventually they did release a playable trial at least. Since Brave Soul was released 12 years ago and Aselia the Eternal probably didn't cost much to localize due to the existing fan patch (JAST worked with the same group for the official release), I presume JAST's statement is based largely on Yumina the Ethereal's sales.

Seinarukana follows the dimension-traveling adventures of Nozomu and his band of friends. The story opens in a typical high school in Japan. Nozomu's everyday life is shattered when the school is suddenly attacked by strange invaders from another world wielding medieval weapons and fantastic magics. Amidst the chaos he and others awake to supernatural powers that had long lied dormant--powers inherited from a previous life. When the dust settles the entire campus has dimension shifted, and the students find themselves stranded in an alien world. While at first Nozomu and his friends simply seek to return to their world, they gradually become entangled in a dimension-spanning intrigue that threatens the entire multiverse. In the process, they discover the nature of their powers, and memories of their former lives begin to awaken.

The premise is reminiscent of its prequel Aselia the Eternal, though it has lighthearted school comedy elements that more resemble spiritual successor Yumina the Ethereal. The gameplay system is an evolution of the strategic overland map movement and tactical combat found in Aselia the Eternal, streamlining leveling, adding greater complexity in the form of separate physical defense and magical defense, and introducing a large cast of playable characters with unique skills. Skills are awarded as map completion objectives, with faster and more complete conquest rewarded with rare and powerful skills, giving players incentive to master the gameplay. You can see screenshots of the gameplay on its VNDB page.

I've played through the entire game, and the gameplay is a blast. The story mixes typical high school comedy with a fascinating sci-fi / fantasy setting, but the blend is smoother and more convincing than Yumina the Ethereal, with the plot and setting gradually introduced rather than dropped in your lap halfway through like with Yumina. Unlike Yumina, there's no grind or random encounters, which I appreciate. Seinarukana is currently rated 8.4/10 with 151 votes on VNDB, ranking it #3 in untranslated RPGs below Eushully's epics Ikusa Megami Zero and Ikusa Megami Verita.

Insider information suggests Seinarukana is planned for a 2015 release, likely timed to coincide with Anime Expo in early July. Unfortunately, JAST appears to be heading for a repeat of the mistakes they made with Yumina the Ethereal: taking a high-caliber RPG, hurling it at fans, then expecting the game to market itself.

Ask existing VN fans (JAST's typical customers) to buy an RPG, and they're going to whine that there's gameplay getting in the way of their story. RPG fans don't necessarily frequent VN sites, because they don't like VNs especially--they like RPGs. On top of that, when RPG fans are looking for RPGs to buy, they're looking for promotional materials that highlight the gameplay: gameplay screenshots, gameplay videos, and playable demos.

RPG fans tend to read reviews before they buy, which means RPG review sites need to be engaged and persuaded to review these games. I never saw any reviews of Yumina the Ethereal on RPG sites, which was probably the #1 reason it didn't do as well as JAST had hoped. There's a huge potential audience for VN-style RPGs with strong gameplay, but it's going to take more effort to tap than JAST is probably used to. But if they're going spend the considerable resources to license a long high-caliber RPG like Seinarukana...why wouldn't they market it the best they could?

Seinarukana has to be released on Steam. Absolutely. Positively. If the game can be listed on Steam, priced affordably, and it gets noticed--the game will sell like hotcakes. I've played Seinarukana, and the gameplay is a blast. Steam users will eat it up. Censoring the H-content in Seinarukana will be no issue because there's hardly any to begin with. And with a censored version, sites like RPGFan and RPGamer should be willing to review the game, which will multiply sales. Getting these sites review copies before release, to boost pre-release hype, is a key aspect of proper marketing!

My message to JAST

Disappointing sales of your RPGs is your own fault. You're dropping the ball. Put some effort into the marketing this time around and you'll get results! You have talented people working for you on Seinarukana that know what it takes to market RPGs. Talk to them! Throw money at them and give them the authority to do what it takes to make this release successful!

My message to readers

It's outside the scope of this article to convince you that Seinarukana is awesome. You'll just have to take make word for it. Regardless if you agree, if you care about visual novel style RPGs then I have a message for you: JAST needs your help. They're at a fork in the road where they're debating if high quality RPGs are worth the effort of releasing. They don't realize they're sitting on a gold mine; all they see is a caved-in tunnel that is taking forever to clear. And if they don't dig down, they'll never realize it.

I want YOU, the RPG fans, to help me tell JAST what they're doing wrong. Here's a pre-release thread for Seinarukana on the JAST official forums. Tell them what they need to do to reach RPG fans like you and me and make Seinarukana and future awesome RPGs a success. Do you want to see shining gems like Eushully's Ikusa Megami Verita in English? First we have to convince Japanese developers like Eushully that there's a market for these games in English, and we have to convince localization companies like JAST that translating a 100hr epic like that isn't going to bankrupt them.

I leave the sword in your hands, RPG fans.