NaNoRenO, the Ren’Py visual novel jam, is for many years now the biggest community event for EVNs, always bringing dozens of upstart developers, amateurs and veterans of the visual novel scene to share their work, ranging from demos and prototypes to complete (and often substantial) games. Since I’ve started the blog I’m always looking forwards to the opportunity to go through the projects submitted to the jam and present to you my personal highlights – games that are worth checking out not only from the perspective of a VN-obsessed weirdo such as myself, but also the average reader.

What set this year’s NaNoRenO apart from the usual routine were, quite predictably, the effects of the Coronavirus pandemic. However, while one could expect them to interfere with the development cycles and result in fewer games, the organizers’ decision to extend the traditional one-month deadline by two weeks resulted in more projects than usual getting submitted (105 to last year’s 89 and 2018’s 73). This included dozens of complete games that I was interested in, clearly signalizing a need to change the formula in which I shared my impressions – listing them in one place, even when after relatively rigorous filtering, would be both unwieldy for the readers and tedious to work on. Thus, I’ve decided to split my coverage by genres, starting with the niche that proved very compelling this time around – otome and other GxB romance VNs. So, please join me while I go through six games in this formula that showed up in NaNoRenO 2020 – and if you find any of them interesting, clicking the titles will bring you straight to their Itch.io pages. As always, all NaNoRenO releases are fully free-to-play, so the only thing they’ll demand is a few hours of your time. Let’s get this started! 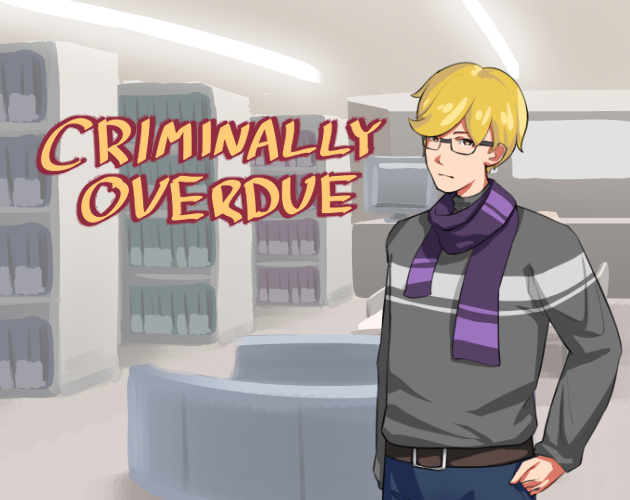 Criminally Overdue is the newest project by Elowan, the author of Alloys over Flowers, one of my personal favourites from last year’s NaNoRenO. This time, instead of being a period drama, the game tells an unusual story in a modern setting: the protagonist is a librarian who after hours helps police in tracking down and arresting drug dealers – a part of a personal vendetta of sorts for the death of her mother, who passed away from an overdose after years of addiction. During one of her investigations, she targets a local university student, which leads her to listening in on the girl’s conversation with a teacher who accidentally learned about her involvement with drugs. Hearing the girl’s motivation for drug dealing and teacher’s attempt to steer her on a better path causes the protagonist to doubt her actions, something she didn’t feel for years and as the teacher in question becomes a frequent patron in her library, she has to reevaluate her choices and think about a path forward – either overcoming her obsession with drug dealers or doubling down on the crusade against them.

Criminally Overdue stands out with its conflicted, bitter protagonist and moral quandaries connected to her fight with drug dealers, and although I can’t say I find it as compelling as Alloys over Flowers, particularly the path where the heroine steps away from her unhealthy “hobby” has a lot going for it. The game’s love interest, the young university teacher I’ve mentioned earlier, is a believable catalyst for the protagonist’s change and a pretty cool character in his own right – caring and eloquent, but also somewhat shy and occasionally awkward. The scenario where their romance blooms is genuinely cute and heartwarming. I just wished the alternative conclusion was at least a bit less of a bad end – Elowan’s previous game made a good job of making alternative endings interesting, while here I kind of wished for the whole experience to be kinetic and focus even more on the protagonist's transformation and her troubled path to romance. At least for the “right” path, though, this VN is definitely worth checking out, also because it looks and sounds very solid for a game jam project.