Hello and welcome to the second part of my NaNoRenO 2020 coverage, where I’ll be going through the most noteworthy games submitted to the most recent edition of the biggest EVN game jam. While in the first part I focused on otome and other GxB romantic VNs, this time I’ll tackle the niche that, in my opinion, contained some of the best projects in the whole event – horror. Once more, I’ll be focusing on complete projects, rather than many demos and prototypes that get submitted to NaNoRenO – and thanks to the extended deadline devs worked with this year, that’s still a lot of interesting content.

One game from the previous post, Dream Dilemma, also fits into this week’s theme besides featuring GxB romance – however, it was a rather unremarkable, simplistic game and most of those I’ll be writing about today are anything but that. So, please join me in this quick overview of NaNoRenO 2020 horror VNs – and as always, whenever one of them catches your attention, clicking its title in the list will get you straight to its Itch.io games. Of course, all the titles I’m covering are completely free to play. Let’s have some scary (and slightly messed up) fun! 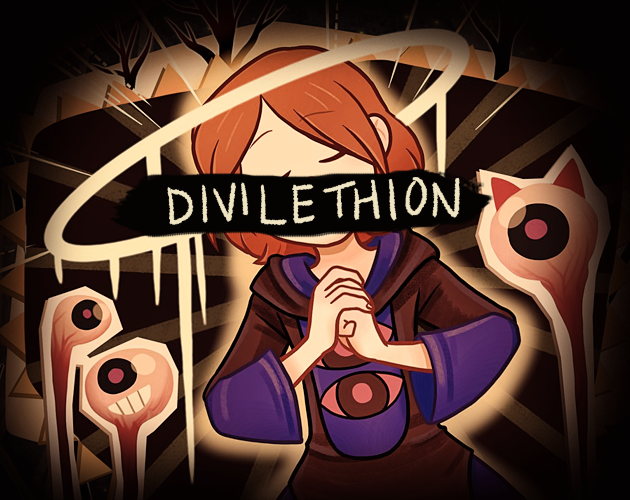 Divilethion is far from your typical scary VN, tilting more to the side of grotesque horror-comedy, with visuals and writing style that contrast heavily with the grim essence of its story – and do so in a brilliant, at times hilarious way. The game follows Lynn, a young high priest in an isolated village “protected” by a monstrous god named Divilethion. While the entity is the only guarantee of survival for the community surrounded by monster-infested swamps and regularly plagues by disasters, the price for its “miracles” is steep – every time, a villager has to be sacrificed and his heart fed to Devilethion. Lynn, cynical and disturbingly diligent about his duties, is soon put to the greatest test yet by the apparently bored deity, asked to sacrifice one thing he might not be willing to give up…

As serious as this story setup might sound, what sets its tone as primarily a dark comedy is Lynn’s warped perception of the reality around him and the grotesque enthusiasm Divilethion requires from his worshippers. This combined with an unrelenting writing style, never shying away from harsh language and disturbing story developments, creates a striking experience that will likely keep you engaged all the way through, to either a relatively-positive or deeply unsettling conclusion. While overall the game is relatively short, it’s just so full of personality and meaningful story developments it’s hard to not be satisfied with it. I deeply recommend checking it out – very few hour-long VNs left me with such a strong impression.