Foreword: I could not ignore Nitroplus work, especially one without reviews. 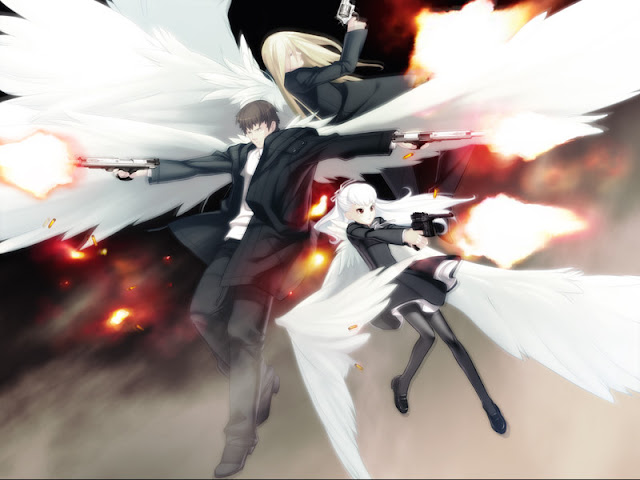 Synopsis: When people die with hearts filled with negative feelings, they turn into 'ghosts', haunting the world. To send those souls to the other world, angels exist, using their guns to 'kill' them. You're playing one of such angels, Wim. 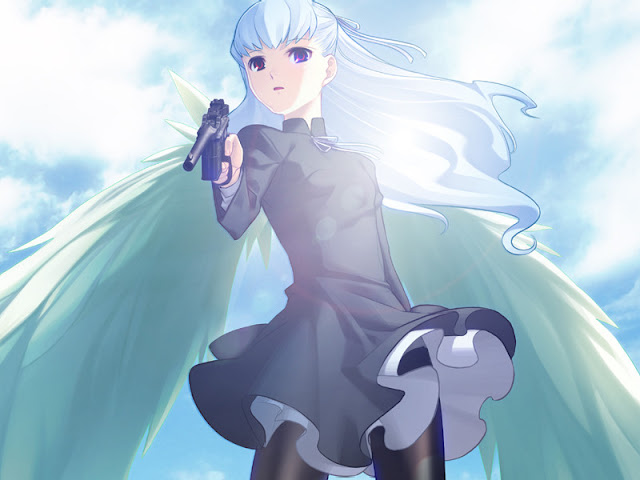 Rating comments: It was a perfect game for me during the whole common route. The second half was less fascinating, but it's still one of the best games I played.

Protagonist: Wim is mature and cool, but at the same time his consciousness is blank enough to be able to write any story. His earliest memory is white, and then he sees himself with wings and two guns beside same looking angels. He starts to hunt down ghosts of recently dead people just like everyone else. But as game unfolds, he starts to question his life... 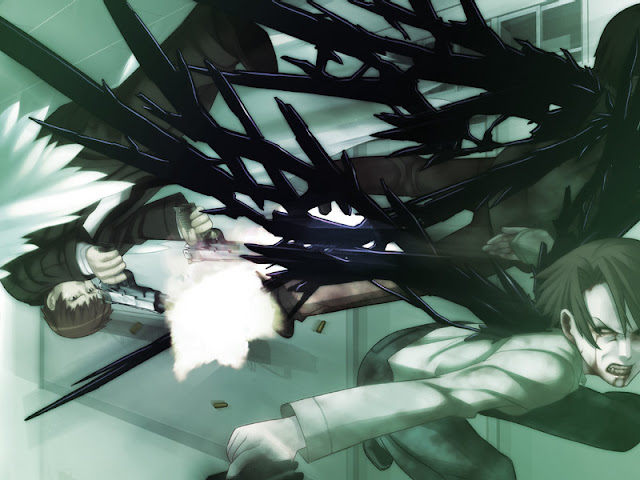 Characters: All three heroines feel alive here. Two of them are siblings. Komaki is the older sister. She is a researcher obsessed with the angel theme. For some reason she sees angels. Fuuko is the younger sister. She can see angels as well. The first time she sees Vim, she asks to kill her. But Fuuko is also lying in coma at a hospital simultaneously... Henri is the only orthodox angel heroine. She has wings, gun and follows angel style of life without asking questions. She's tsundere'ish and hates all the ghosts of the dead people. But actually the most important character of the game is rapist and killer Jay. The whole story is based around him. Fuuko and Komaki are his blood sisters. Henri has shared memories with Jay to such an extent that Henri is stumbled every time she sees him. Assassin Issei is the father of Fuuko/Komaki/Jay. But the most cool character in the game is the oldest angel Peter. He witnessed the judgement day and afterwards taught Vim everything. By the genre's laws Peter is just destined to betray Vim at some point, but to my greatest surprise things are much more complicated here, and Peter becomes a most reliable partner.

Story: Actual story is quite complicated. 18 years ago children stopped to be born on the Earth. Most people go to work by inertia, but suicides become a common place, and streets are full of all kind of filth. Angels just patrol in search of recently dead souls - ghosts - and kill them with their guns. Game starts with a suicide and continues at a hospital with many deaths incoming. Two sisters can see angels, and in communication with them Vim starts to get interested in humans. 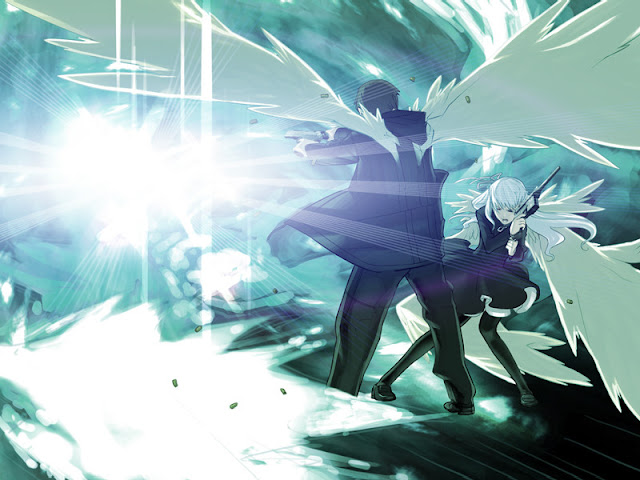 1) Game poses a huge number of questions. Why there are people who can see angels? What's the identity and past of angels? Why only Vim and Jay have double guns? Why Fuuko wants to die and what's wrong with her other self in coma? What's so special in Jay? Is there a way for humanity to recover? Finding answers for all those questions is the most fascinating part of the game. But the mid-game we more or less find the answers, so second half full of action does not feel as exciting.

2) Game is organized in the same theater manner as Project-μ games, and considered the action nature of the game a strong presence of Gin no Hebi is felt. Such directing is superb in comparison with other normal games.

3) Unlike other Nitroplus games that I played, dialogues play bigger role here than action scenes. It looks like self-irony to me when Vim tries to explain why he kills ghosts of dead persons and does not try to resist. The only answer he finds is that "gun calls" him to do so. Nitroplus provides so many action scenes, because cool guns call them, but it's not always the case that story must be inferior.

Overall comments: It surprises me greatly how Angelos Armas got so little attention in the West. The Japanese reviews are more or less modest in their impressions, but I've learned it the hard way that the Japanese understand nothing in plotge. It's the best Nitroplus game that I've played so far, so I denounce all my accusation that Nitroplus can produce only stupid action games. 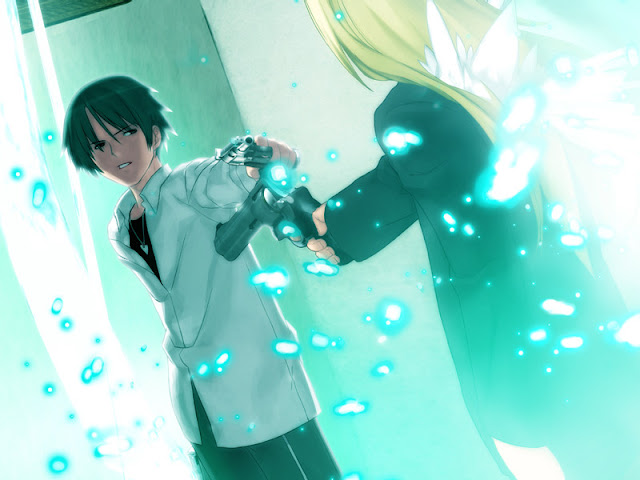