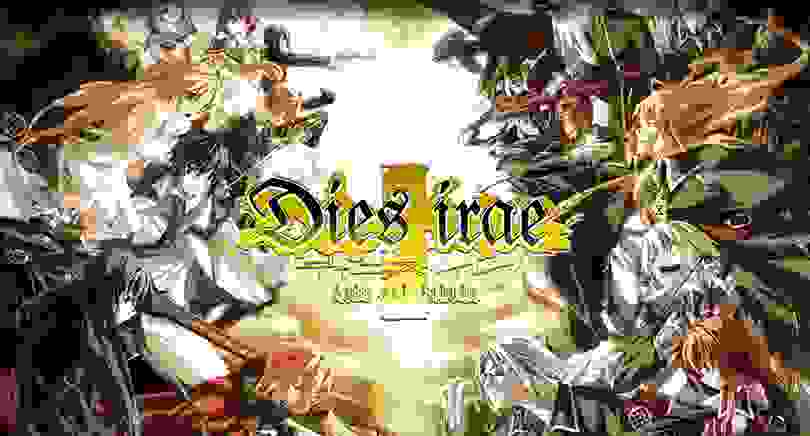 Whatever our hobby is there are always these once in a while moments when we get a chance to experience something that makes us glad we have this hobby, it defines and gives reason why we love what we do. Dies Irae is one such visual novel for me.

Written by Takashi Masada, Dies Irae was his most ambitious work at the time. The game was a bit of a mess when it was first released. However it gained enough popularity and allowed Masada to redo the script, add two more routes, and polish up the visuals and turn it into the epic we have today. There were a few more versions of this vn published over the years like the PSP port, a pc port of the PSP port and so on. VNDB is your friend so look it up if you want to know more.

It all begins with a long monologue by some mysterious personality talking about destiny, fatalism, predetermined choices and other stuff. You better get used to it because this story is full of long thought probing self indulgent philosophical poetics.

Then we move on to the prologue, still no clear connection to the main plot and yet still immersive to read. The earth trembles by the sounds of the roaring cannons. A rain of dust and shells and hellfire suffocate every last breath. The screams of the victims are unheard over the screaming gunfire. Unknown to the blood stained history an event is about to occur that will set the course of certain individuals on a path of tragic destiny.

The story begins proper in Japan as we are introduced to our protagonist and slowly the rest of the cast. The story is so dense and has such a sheer amount of layers of depth not a single moment is wasted. So much is going on that sometimes it feels as if the narrative is stretched too thin by trying to cover everything and show every character from every event at the same time. Somehow the insane narrative strategy successfully manages to juggle all that without being a confusing distracting mess of a story.

It's really impressive how Dies Irae manages to stay consistently interesting without slowing down or getting boring for the entire length of the story. Not that there aren't slow moments but these are all part of the perfect pacing Masada fused into every scene so everything feel natural. There is almost always something new and interesting to discover at every corner. I can imagine Masada really putting all he's got into polishing the script into a crisp and shiny diamond the end result eventually turned out to be.

This is an action packed vn full of the most badass cast of characters to ever show up in any visual novel I ever read. I dare you to find another vn with so much badassery and flavor of style. What makes it so good is how Dies Irae develops the characters and almost makes them come alive. Pretty much every character has a strong presence illuminating the entire stage, that's a good thing since you'll be seeing and hearing them a lot throughout this 60+ hours story.

The graphics and sound is another area Dies Irae outdoes most everything out there. The character designs are great and the CGs are beautiful especially if you take into consideration that there are a lot of them and all look spectacular. The voice acting is just perfect, can't say much more except that the protagonist is also voiced and he is awesome. There a lot of music tracks spanning from rock metal to slow emotional music to an all out Mozart opera. Suffice it to say that Dies Irae is a feast for the eye AND the ears.

The sheer scope of this work invites volumes of essays, theories, speculations and arguments. It is the visual novel that defines its own genre. It is the proof that visual novels are serious storytelling medium and they are here to stay. It's rare to see a product that brings every single perfect element into one beautiful whole and Dies Irae is one such rare breed.