This is a condensed version of the full review which can be found on my Main Blog Here.

There is a certain beauty to the simple impulse to say, “Wow that is so cool”. It is a short phrase filled with an innocent emotion many of us lose as we get older and the realities of life turn everything into a grey soup. An adult is meant to be mature and sensible so expressions of wonder at something are frowned upon. After all “The nail that sticks out gets hammered down”, being different is hard and finding a place to belong is the eternal quest. Heaven Will Be Mine is an exploration of this space through the medium of cool mechas and three protagonists who are each seeking someone who understands them and a place to be themselves. As you will soon see it has a deep understand of its subject matter and the skills to speak to the player through their mind as well as their heart. 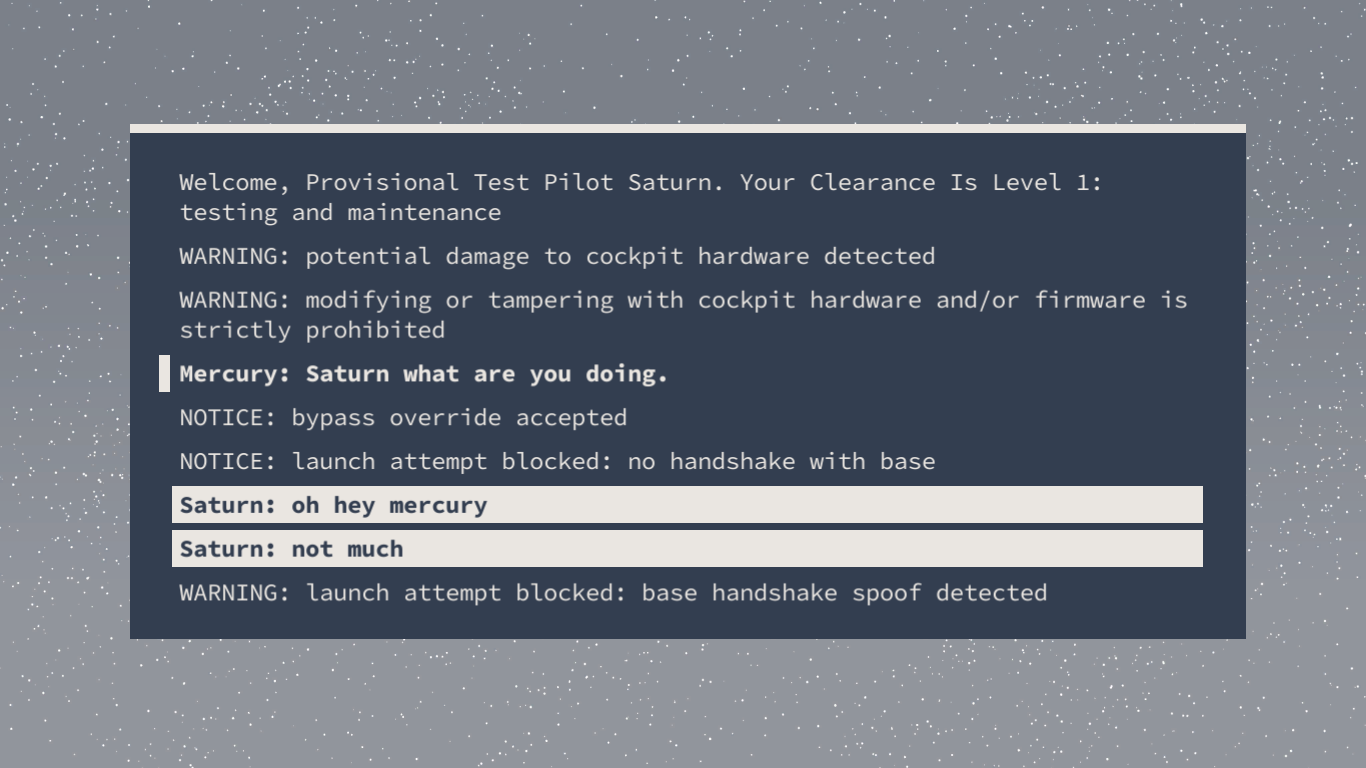 The Tale of Some ‘Bad’ Girls - Narrative, Themes and Metaphor

The story of Heaven Will Be Mine is through a unique mix of intimate interactions and clever implications and metaphors. It brings three distinctly different protagonists to the table to enable its rich narrative and places them on contrasting side of a conflict they have an increasingly personal investment in. Their conversations and the factions they side with form the backbone upon which the metaphor driven events and the story's themes are built.

Presenting the player with a choice of three possible protagonists the moment they start the game is a bold decision. We know nothing about each of them outside of the brief description provided nor what the consequences of our choice will be. However, this ultimately works in the game’s favour as it sets the tone for the types of choices the player will be presented with and the individual centric nature of the narrative. The result of having three different playable protagonists and asking the player to play through each one separately is that it allows for each path to focus on their own thematic angle. It also provides a more even experience inside each protagonist’s route in order to keep the messages and ideas clearer while also presenting a sense of variety in the long term.

If there is one thing this game loves above all else it is figurative prose and in particular metaphor. This covers everything from the elegant writing style to the awe inspiring visuals. When a metaphor is used it is not made of a single element but from combining parts to create the desired effect. This commitment to ensuring the quality of the metaphors helps to fuel the player’s immersion by surrounding them with metaphor and giving them the room to soak it in. Through this engagement with the player the themes and messages on display can be subtlety conveyed to them in an organic and gradual fashion which prevents the game from coming across as preachy. 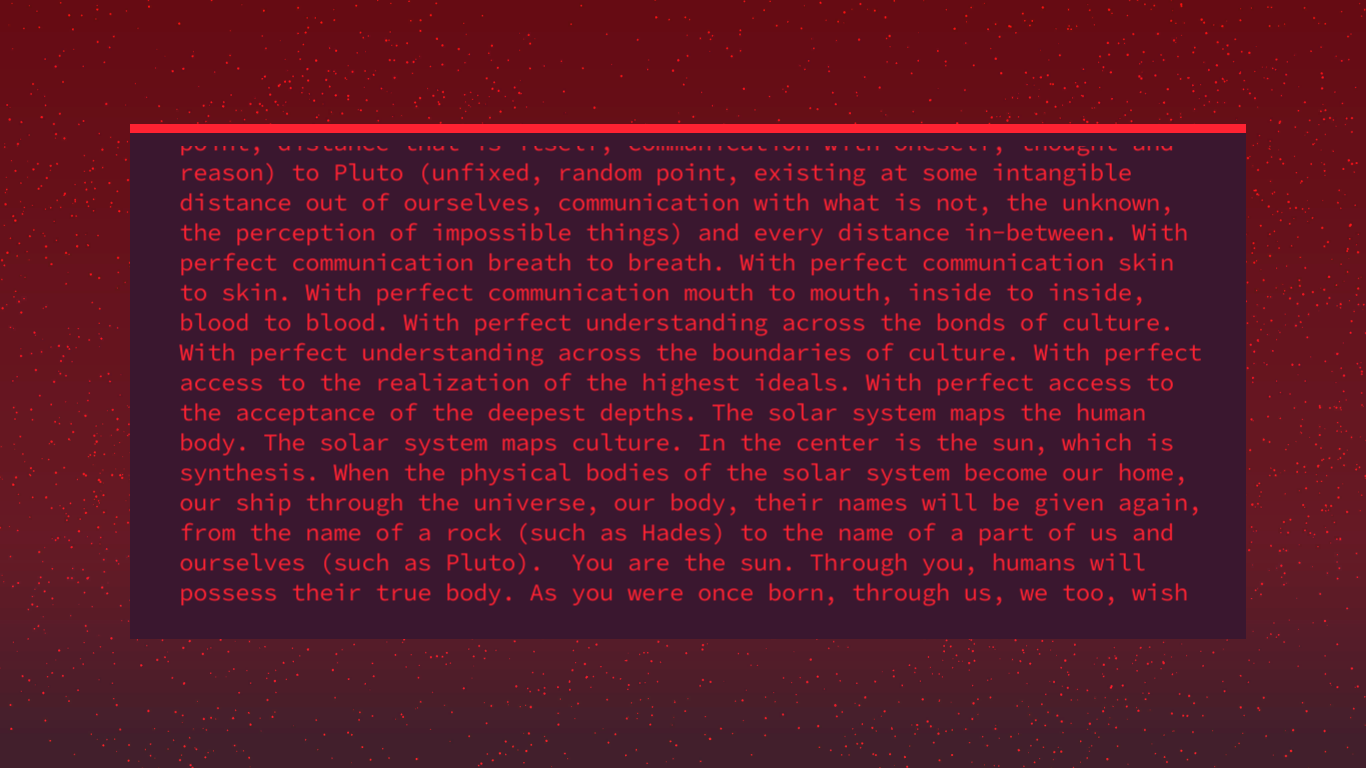 The downside to this figurative prose driven narrative style is its sheer variety and indirectness can confuse the reader as much as it informs them. Heaven Will Be Mine does not do much to alleviate this problem and instead expects its audience to keep up with the ideas and themes being thrown subtly their way. As a result it is possible for someone to completely bounce off the game and fail to understand it or leave with the impression that it is nonsense. So it is worth keeping this in mind if you struggle with more opaque writing then this story might not be for you.

Those Who Seek A Place To Belong - Characters

The three protagonists from whose perspectives we view the story are the rebellious Saturn, the kind Pluto and the thorny Luna-Terra. Each one brings a contrasting personality to the table and the resultant banter mixed with their near constant flirting brings humanity to the depths of space. Their interactions form the majority of the what the player experiences within the game so this aspect needed to be strong and it delivers this in spades while blending in and around the metaphor rich scenes. One key element the protagonists recognise quickly is despite their often clashing personalities they all do not belong and their differences are not valued within Earth’s gravity. This leads them to slowly take solace in each other as they flirt and explore their feelings towards others, towards themselves and towards the people they work for. It is a mixing pot of emotions which drives forward these protagonists towards the ending the player chooses for them. 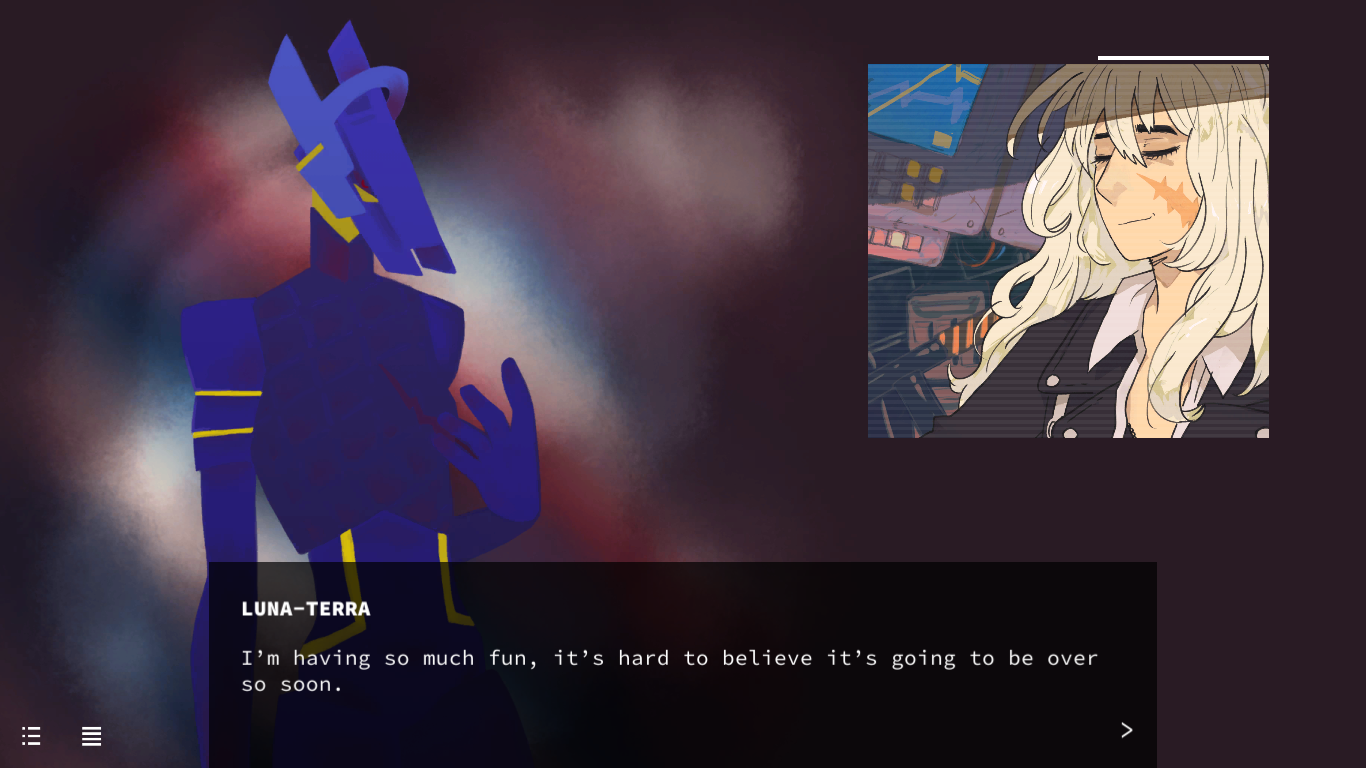 When it comes to the presentation of this layered narrative and its complex characters Heaven Will Be Mine delivers on multiple levels. Haunting visuals are complemented by a soundtrack which expresses loneliness and companionship in the depths of space. This is a game which understand well the trapping of the genres it draws from and how to use them in an appealing and powerful manner.

Saying a lot with a little is the strongest aspect of this visual novel’s presentation. There is no wasted space in any moment of the playtime. From the use of the protagonists’ cockpit views to express what kind of person they are as well as their facial expressions to the use of showing directed parts of an image to slowly build up the scene while playing into the metaphors present in the occupying text. The economising of content is definitely a result of the budgetary restrictions which are visible in the overall small pool of art assets. However, it is from this necessity that innovation is born and Heaven Will be Mine understands how to utilise what it has to great effect in a manner which allows it to outshine games with a much higher costs. This also enhances the role of metaphor in the game and makes it lean into its unique style all the more.

If there is one visual element which best encapsulates the distinctive style of Heaven Will Be Mine it is the self-ships. These are the vessels through which our characters act out the major events of the story and serves as another powerful image of their selves. Their designs of an evocative mix of other worldly cosmic forces and human vulnerability and each one perfectly reflects the pilot while still being consistent with the overall aesthetic of the game. The game’s Evangelion influences also peek through here with the self-ships having an aesthetic and purpose reminiscent of the Evas while still being distinct from them. Abstract imagery invokes what concrete picture cannot and this is the core strength of not only the self-ship designs but also the art direct as a whole. The game could have simply used a more standard mecha design and it would have functioned within the narrative but lacked the impact and presence of the self-ships. Placing a focus on the self-ship design was ultimately rewarded the game with an excellent supporting pillar for the overall experience. 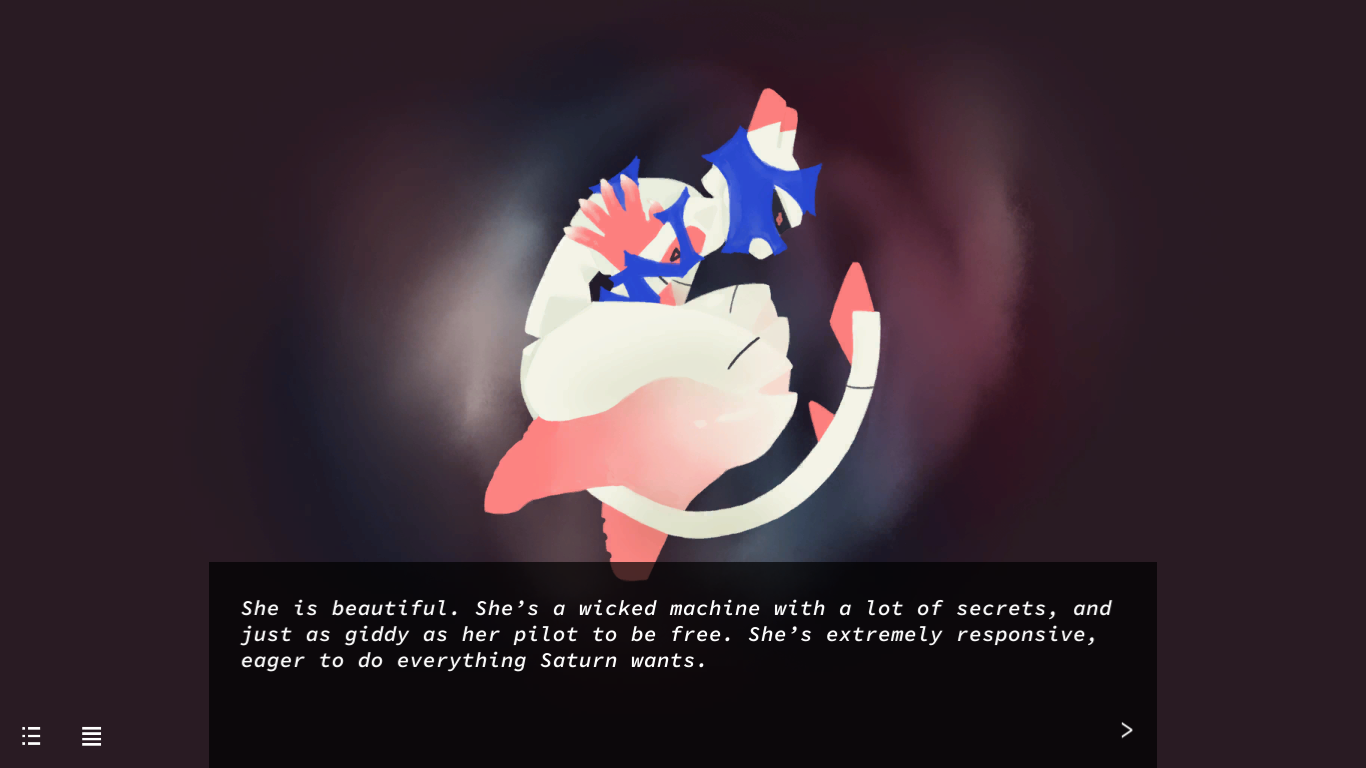 There is one area in which Heaven Will Be Mine struggles and this is the lack of quality of life features. These includes an absence of standard elements such as a skip function and a gallery. Not having these features can be felt more acutely on the repeated playthroughs the game expects you to do since you cannot pass over text you have already which can make them a chore. The omission of a gallery is a disappointment as it would have been nice to be able to examine the beautiful art at my own pace rather than how it is shown in game. None of the absent features are a deal breaker as they game itself excels in most other aspects, but it is something to keep in mind if these features are important to your viewing pleasure.
Verdict – 9/10 –
Heaven Will Be Mine is one of the few visual novels which truly understands the power of metaphor and themes and employs it with such finesse that its every moment is a pleasure to play.
Pros
+ Hits hard with an art style and soundtrack which use vagueness and imagery to invoke emotion and imply the metaphor in each scene.
+ A cast which is one of the most flawed and empathetic sets of characters in fiction with even side characters getting the emphasis they deserve.
+ The game understands the trappings of the sci-fi and mecha genre and knows how to play to their strengths with exceptional ease.
+ A strong commitment to its thematics which echoes throughout the entire game and keeps them present in the players mind.
Cons
- The only ending which make sense for each character is their faction one and the others feel somewhat forced for the sake of having choices.
- Its heavy use of figurative prose could make the game too vague for some people.
- Lacking some features such as a skip function or a gallery.