This is a condensed version of the full review which can be found on my Main Blog Here.

Using amnesia as plot device is a common tactic by many creators who want to put the protagonist on the same level as the player, but its use rarely goes beyond being an excuse for exposition. Enter Amnesia: Memories, as you might have been able to guess from its name this is a story about a protagonist with amnesia. However, unlike many other titles this one uses the amnesia as a key point to build around and create tension between the player and the unknown. This is a game about uncertainty, be it in relationships or unknown motivations, and overcoming it to build a future together with the one you love. It is also a perfect example of the pros and cons of a complete self-insert protagonist and how it can be used to effectively sell a tone and immerse the player. Overall it is a very interesting example of its genre and as we move forward you too will come to appreciate how it achieves its success. Can You Every Truly Know Another? - Narrative and Theme

When it comes to narrative complexity Amnesia: Memories is on the simpler side with a focus on a few well worn themes and ideas. It is how these elements are put together which raises it above many of its kin. The methods it uses to achieve its success are focused around putting the player in an unknown social situation and asking them who they can trust. Back this up with a solid selection of romance options and the result is quite impressive given how similar it is to its peers on a base level.

The vast majority of the tension present throughout the story originates for the question of who to trust. By placing the protagonist in the same position of ignorance as the player through their amnesia the player cannot look to the protagonist's interactions for guidance which enhances the sense of isolation. Feeling out which of the male leads you can trust and tentatively getting to know them forms the bulk of the experience. The acts of opening yourself up to these people through the protagonist is a strangely cathartic experience and adds an intimacy to character moments knowing that they had to earn your trust. Later in a route the tension provided by the unknown is refocused solely on the hero who is the object of the romance and in some cases even ratchets it up further by revealing a hidden side to a person you thought that you knew. Through the game’s willingness to play into our fear of the unknown and shift the source of that uncertainty when needed it can achieve an engaging current to push the player to continue to play.

Having a strong sense of romantic storytelling is key to the success of any otome and Amnesia is no exception. Each hero is distinct from one another both in terms of personality and the content of their routes and this allows the player choose from a wide variety of experiences to meet their tastes. This mixing of choice and blind uncertainty heightens the romantic tension between the player and their selected hero and feeds into their investment in the struggles of that character. By playing on this feeling, the narrative of the route can hold the player's interest though the slow revelation of the hero’s flaws and their intimacy with the protagonist. While the actual content of the routes is not necessarily the most original for an otome, it uses the above techniques to obscure this with a sincere presentation of the story which does its utmost to sell the emotions of each scene.

The one major issue with this approach is the fact that there are times in the story when it can come across as nothing more than a hot guy buffet for the player to choose from, rather than a selection of believable people for you to invest yourself into. This is mostly a side effect of the blind choices presenting options whose only immediately perceivable consequence is the affection of a specific hero and leads to it feeling a little shallow at times. However, the problem is only really noticeable after a few play throughs when you have a feel for the game’s tricks, before that point you are too focused on the tension of the unknown to notice it. Discussing the characters of Amnesia: Memories presents an interesting problem as it is a narrative defined by the presence of a none-character as much as it is by the heroes. This gaping void takes the form of the protagonist and their complete lack of personality creates a unique set of problems and opportunities. Of course the main cast are still the stars of the show with an excellent variety of personalities which clash and complement the overall narrative choices of the game.

Having a self-insert protagonist who only speaks through the dialogue choices made by the player is hardly a special feature of Amnesia with the dozens of other game which uses this narrative device, especially in the mobile gacha space. Instead what makes it stand out is the way in which it commits to this protagonist for the purposes of immersion and building atmosphere. Rather than being content to simply let the player project themselves onto the protagonist, Amnesia takes things a step further by placing the protagonist, and thus the player, in a position of vulnerability through her amnesia and the contrasting information provided by a cast of unknown people who claim to know her. By bringing the player and protagonist closer together it makes it easier to blur the line between the two and allow the player to experience similar emotions to the protagonist through their emotional investment into her.

The inclusion of a self-insert protagonist comes with a few noticeable downsides. First of all there is the issue of how to fill the down time where the protagonist is on their own or where the narrative needs to express some idea or feeling and cannot use another main character to do so. The answer to this problem for Amnesia and many other games using similar protagonists is to have a companion character who acts as the voice of the narrative and set the mood or delivers exposition. In this case the role is assumed by Orion, a character whom only the protagonist can see and plays a critical role in the plot as the instigator of the amnesia issue. While he is relatively inoffensive for the most part, there are times when it becomes too obvious that he is the voice of the developer trying to push you into a certain state of mind and in these moments he can come across as an irritation.

The second issue with this choice of protagonist is the lack of proper back and forth between her and the male leads. This results in sections where the hero talks at the protagonist rather than having an interaction with them as a consequence of her silent status and developer not wanting to overuse choices in order to keep them feeling special. Thankfully these moments are uncommon, but when they do happen they can bring you out of the experience by making you more aware of the limitations of this narrative design choice instead of focusing on the emotional weight of what is being said. 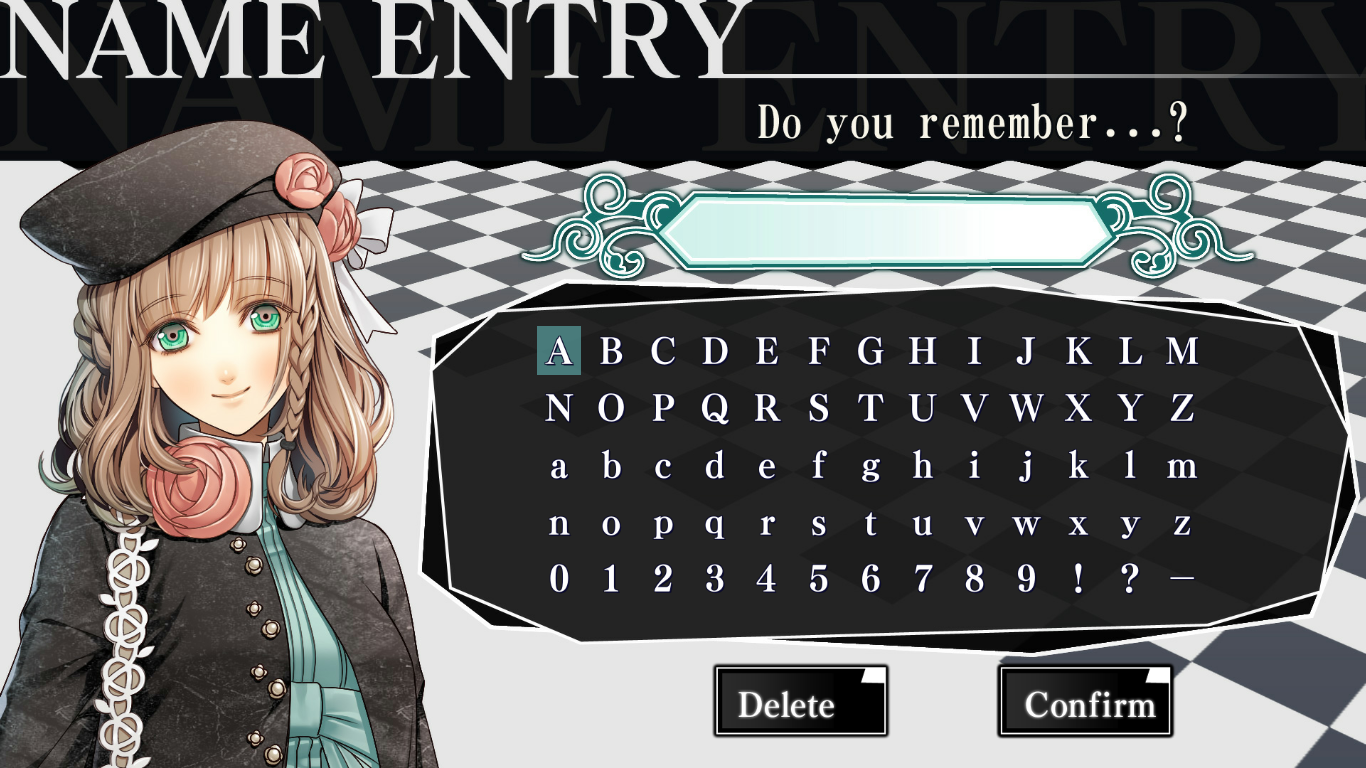 A Dream Across Every Inch - Visual, Audio and Technical

Amnesia’s presentation and technical aspects are somewhat of a mix bag with the game playing it safe in many areas while still having a flair of its own. The overall package is of a high quality due to this title being from a larger studio and established design of their games shows itself throughout. However, this comes at the cost of being unable to distinguish itself from its peers and failing to keep up the quality set by the narrative.

One area which does not disappoint is the art direction with striking colours and patterns across every surface and character. The four suits of playing cards is the motif which the game uses for its visual design with each of the main hero being associated with one of them and assigned an appropriate colour to match. Presenting the characters and environments through this stylised imagery creates a striking contrast between each hero and keeps the artwork feeling stimulating over the course of the entire game. Alongside these elements Amnesia chooses to have each background make use of contrast and vague outlines leading to an almost dreamlike feeling to the events playing out in them. The CG similarly play up this strong visual identity, but here it is used to create intimacy and focus on the emotion or idea the image is attempting to invoke by carefully emphasising the key element with distinctive designs and colours. Together the package understand how to play to the strengths of the medium and makes sure each aspect can shine in the appropriate manner.

In terms of features and technical polish Amnesia is the base level you would expect from a visual novel with a few interesting additions. This is to say that it has the standard list of features, such as a gallery and a skip function. On top of this is has an in-game tracker for the affection, trust and suspicion of your chosen hero which is useful when it comes to figuring out what choices raise each value. There is one strange feature in this package and that is a set of mini-games only available on the main menu. These are incredibly detached from the rest of the game's content to the point where you would question why they even exist, but I suppose they are there for those who want a distraction from the main game. Regardless, those playing Amnesia will not find it wanting on the systems level and most likely will not notice any potential improvement which could have been made. 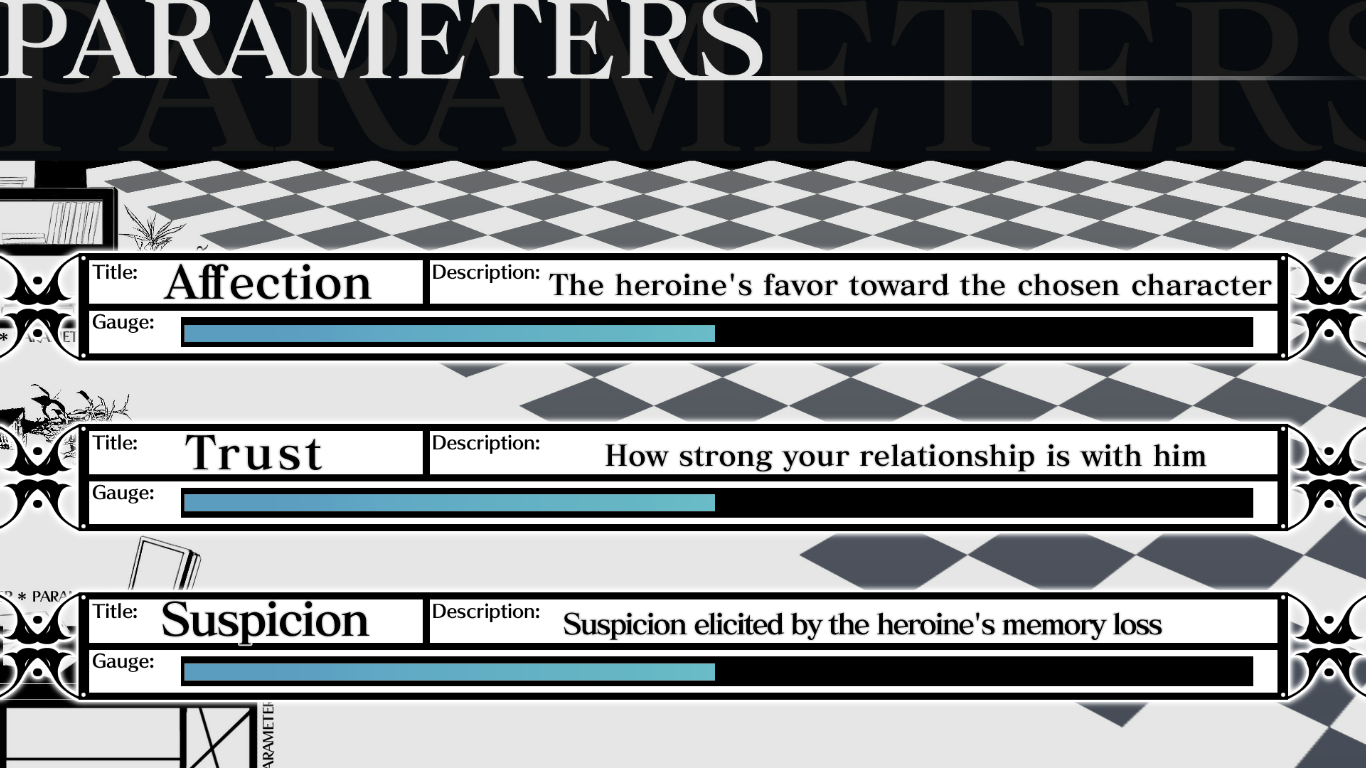 Verdict – Amnesia: Memories is a game as much distinguished as harmed by its commitment to creating tension and immersing the player in the role of the protagonist.

+  The male leads give a good variety to narrative and the types of relationships on offer to the player.

+ A satisfying final route which raps up all the hanging plot threads in a nice bow and feels suitably final.

+ One of the strongest uses of a self-insert to sell the bond between player and protagonist and create a palpable tension through the unknown.

+ The art style adds a dream like quality to the game and helps sell the atmosphere and the romantic fantasy.

- Having a self-insert protagonist can hurts character interactions and leads to some stilted scenes.

- At times it can be a blatant buffet of hot men for the player to choose from to the point of being off-putting.

- A mediocre soundtrack and lack of interesting technical features hold the game back from being a more well rounded package.