It’s a wonder why people love to be scared so much. Maybe the rush of adrenalin in their brain catches their bodies of guard after of which, a great release when we finally see that there’s nothing there, no real danger, and we are in our usual safe environment. Maybe the after laughter brings hope and restores our belief in the culminations and worries of our mind, secreting a form of powerful alembic of pure neural ecstasy. Or maybe it’s just fun to be scared sometimes. Horror films are undeniably the most profited movies in the business. They are very cheap to make and have great high returns, no wonder in a field where emotional excess is the rule the movie studios keep churning horror films, and their remakes, and their reboots, and reimaginings. 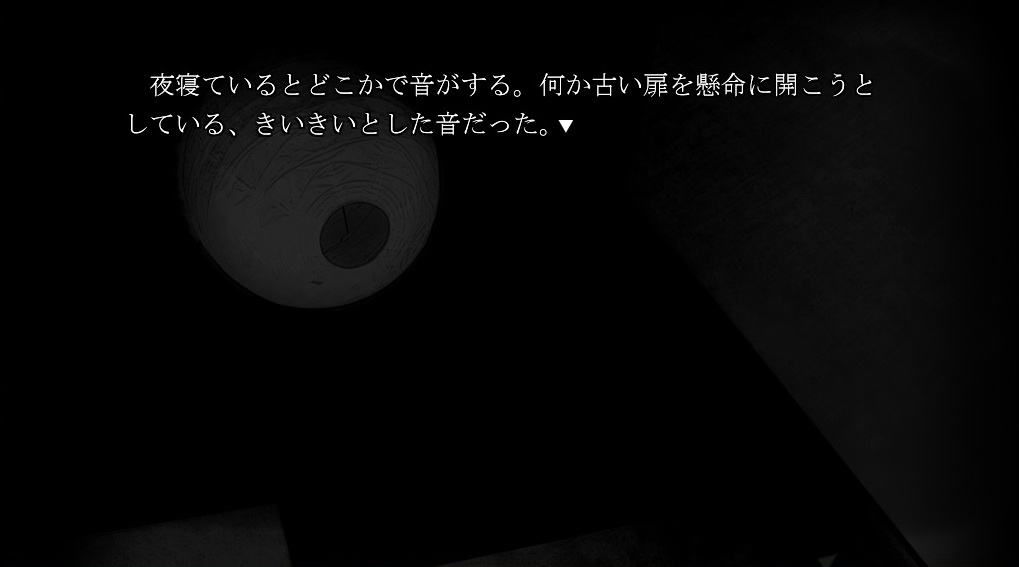 Visual novels are not strangers to the horror genre and if anything their unique enamoring style, the terrifying bloodcurdling script, the spine chilling ambient sounds, and dark creepy visceral  images, make visual novels one of the best mediums for horror stories and experiences in general. Phenomeno is a very short promotional horror kinetic visual novel and an adaptation of a light novel by Hajime Ninomae who partnered with Nitro+ to promote his book. Nitro+ also hired the famous and talented Yoshitoshi Abe as a character designer. He worked on a few games and anime in the past, most famous and most well known of his works is a highly praised and highly regarded as an all time classic anime series Serial Experiment Lain.

To be more precise, Phenomeno is a kinetic sound novel and the experience feels very close to the classic Chunsoft’s –the inventors of the genre—sound novels such as the chilling horrors Otogirisou and Imabikisou and the mystery Kamaitachi no Yoru series or 07th Expansion’s Umineko or the more appropriate horror mystery Higurashi. It doesn’t have quite the exact same visual appearance as the Chunsoft’s games but at it’s core Phenomeno is as classic sound novel as they come. Contrary to what you might have heard, sound novels are not visual novels with an emphasis on sound, music, effects, and other audio techniques. Sound novels don’t use audio anymore or any differently from any other visual novel. They were called sound novels to promote the so called new genre of games but visual novels already existed before that. So sound novels are just visual novels only with few careful differences. The first main difference is that they use an NVL style text box that fills the entire screen rather than a small text box at the bottom third of the screen. Another difference people might notice is that they have a differently kind of presentation style than a typical visual novel, so if a visual novel has an NVL style textbox it might still not completely be referred as a sound novel. At the end of the day it all comes down to personal preferences, nuances, and technicalities. 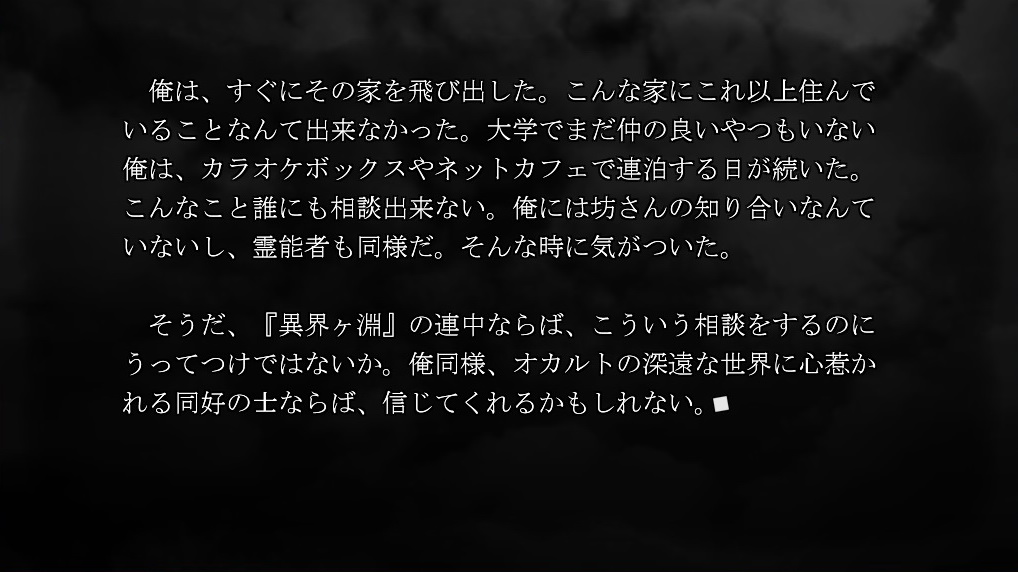 The audio in Phenomeno is very minimal, there are only few music tracks, all are good but as the game progresses there is a much bigger reliance on the natural ambient sounds and sound effects to carry the script and once again Nitro+ did a fantastic job here as well. Phenomeno has great sound but also knows when to scale back and, importantly, not afraid to surround the reader in complete silence. The game was directed by a Nitro+ veteran Keichi Ogami who also directed Guilty Crown Lost Christmas and Tokyo Necro. These games, Phenomeno included, show his ability to change styles as appropriate for the project he’s currently working on. And Phenomeno really shows his skills as an excellent horror director. Phenomeno is also one of the best books to visual novel adaptations, and it’s much harder to do than it sounds.

After moving away from home and getting a surprisingly cheap offer for a new living apartment, Yamada Nagito, a young university student far away from home, suddenly one quiet night as he was falling as sleep, starts hearing strange noises. Could this just be his imagination, maybe it’s a howls of the wind scratching over the surface of the outside walls and roof, or perhaps a tree branch caressing his house. But the noise is too close, too inside the house, too close. Where is this noise coming from anyway? 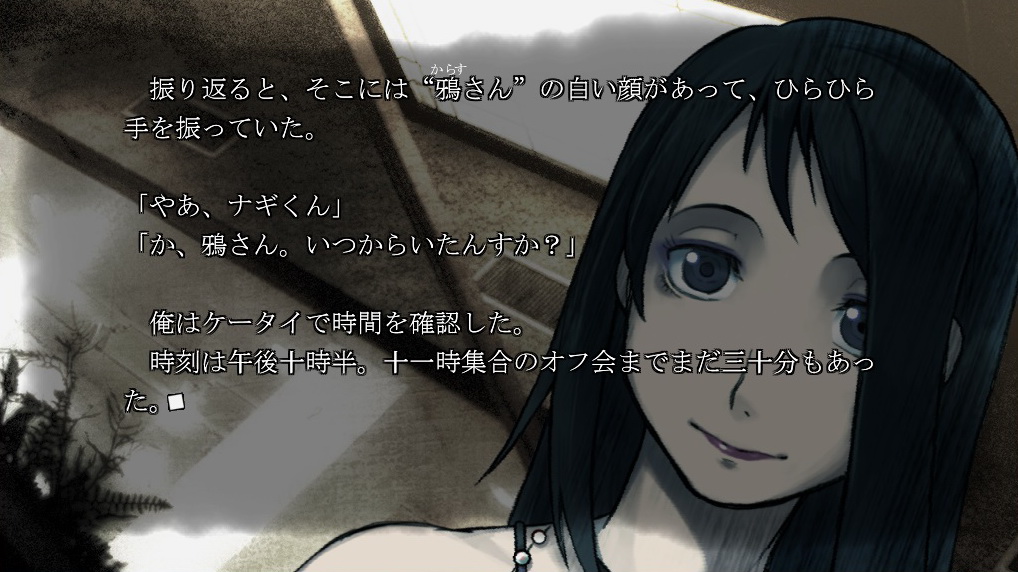 The game is an adaptation of the first case of the first light novel. The case is divided into two parts and both tell one complete story so essentially one is a direct continuation of another. There’s also a very short prologue in the very beginning. Each part starts quietly and slowly but in no time the tension builds and the horror begins. It is propagated by the strong narrative with a focus on just as strong progression and pacing by keeping the reader constantly engaged with a perpetually increasing layers of fear, tension, and confusion on top of a compelling mystery really bring the story to life. There are genuine scare moments here but surprisingly there is not much here that could be called a jump scare which is quite incredible considering how too easy it is to rely on jump scares. The nightly dark visuals, the interesting script, the scratching sounds, or just someone walking up the stairs or even a sudden revelation make Phenomeno into a really good page turner.

There isn’t particularly anything here that will blow your mind on any intellectual or cerebral level. The story doesn’t try to be anything more than what it is and it’s best to take it for what it is and just have fun. Eventually and pretty quickly we discover the strange reason for these ear chilling noises however the source of these noises still alludes us, we’re not even close to discover who or what is making them. What is revealed appears very likely to be a kanji character for the number seven. Yamada admits that in addition he later discovered another number after he heard the very same kind of noise in the night, but that time it was kanji for a number six. If only things were so simple for Yamada but just a week ago he found another number, again it was a kanji for a number five. These numbers appear out of nowhere and always preceded by these strange ghostly scratch noises. What could they really mean, is this some kind of a countdown, is something going to happen when it reaches number one, and will Yamada die. 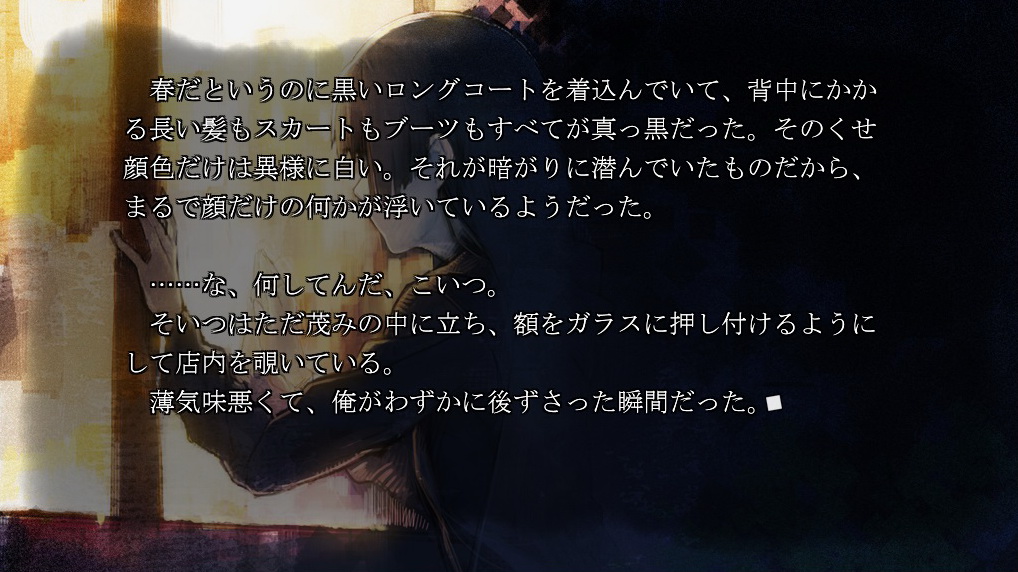 This will be the central mystery throughout this game. It will lead Yamada to meet a mysterious girl with beautiful blue gem like deep eyes, and later he’ll meet a few other friends, people in the occult club. His  case will be quite an attractive thing for the club members and they will be on a way to solve this strange and scary mystery. At the conclusion of which, well… You’ll have to play and find out. It won’t blow your mind but for a short length vn, Phenomeno is pretty much phenomenal.