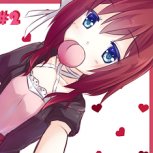 By Diamon
January 1, 2015 in Creative Corner