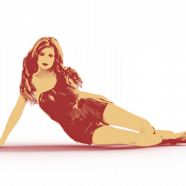 BIG NEWS. Guess what infamous antagonist is officially returning to visual novels for the first time in over a decade?