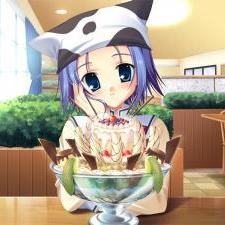 So I just did the Bad End for Makina in Grisaia no Kajitsu, and I'm shook.