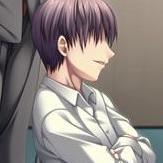 Relatively new to VNs/Question about Kara no Shoujo