Favorite Group of Heroines in a Visual Novel 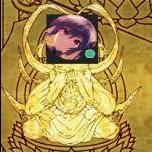