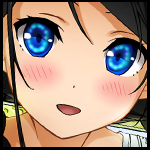 By voidpointer, June 22, 2015 in Recommendations