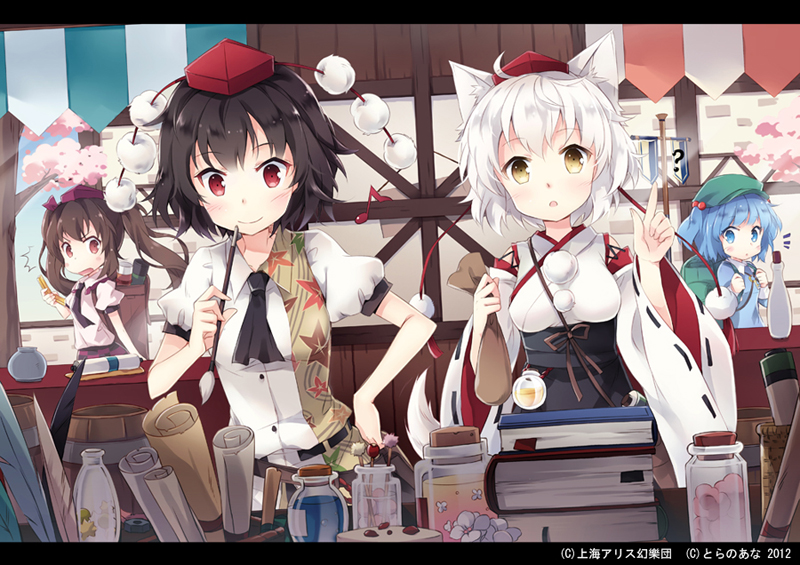 This was originally meant to be a post about Aya- I'm particularly fond of Hatate so I decided to do both of them, though.

That, however, proved to be a problem. If I was doing Aya and Hatate, I would never talk about Momiji. Momiji isn't terribly important to the touhouverse, but she's a beloved 4th stage midboss with a lot of fanwork on her, so I decided that I'd cover all 3 of them, since they share the same species.

I then went to look for a picture with the 3 of them and found that one, that also has Nitori. Nitori is a popular character that deserves a post of her own... But this was going to be unholy long anyway and I really liked that picture.

So today we'll be covering all known residents of the youkai mountain, ignoring the 5 gods (one of them also being a miko) that live there... Though I must say I did entertain the thought of doing a "Mountain of Faith" post at once.

Alright, blog logistics aside, let's get right into it!

Aya Shameimaru is one of the most interesting touhou characters out there. She's the protagonist of two games of her own- being the only playable character in the first and the main one in the second- those games being Shoot the Bullet and Double Spoiler.

Aya is a crow tengu (linked to Perfect Momento in Strict Sense article on tengu because this post doesn't need to be any longer than I'm sure it will be). Crow tengu are dreadfully fast- Aya is normally portrayed as the fastest amongst all of them, being often called the fastest being in Gensokyo.

Friendly, carefree Bunbunmaru newspaper runner aside, she's also a legitimate tengu who will stop any trespassers climbing the mountain in and above tengu territory- while it's stated that she never used her true abilities in a danmaku fight, she's still a strong opponent that one should not anger- while she's generally going to be flying around writing things for her paper, she has a scary tendency to "accidentally win fights" against considerably strong enemies while trying to take pictures. Fact is, she's the one chosen by the tengu to stop trespassers, even though they're well aware she won't fight seriously. While her standing in tengu society is unkown, she's doubtlessly a powerful being.

Aya is one of the most well-known touhou characters and has appeared in 10 different touhou games in one form or another- without counting mentions of her name, in which case she has appeared in every touhou game in the second generation of the touhou era up to Ten Desires. 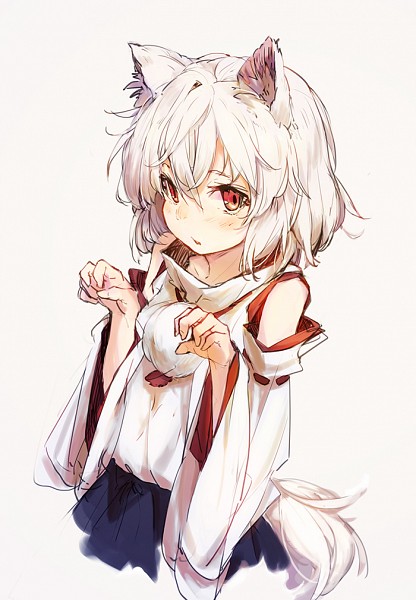 Inubashiri Momiji is the only known white-wolf tengu (though it is known that several of them live in the mountain).

She's Aya's stage midboss, though it is known that they do not get along and fight whenever they meet- possibly because there's a lot of contrast between them.

Momiji is faithful and loyal- while she has no in-game phrases, we know from print works that she'll always execute her orders to the letter. She has several fandom personalities and I'm not the best to talk about those, as I'm not particularly fond of her character- the only thing coming to mind being her as a tsundere to Aya. They're also commonly portrayed as good friends in stories where Hatate is involved, since Hatate tends to fill the rival role for Aya.

She works as a mountain patrol to the tengu- and while she did fail to stop the protagonist in Mountain of Faith, she did suceed in reporting you to the tengu, since she managed to get Aya to show up before you managed to climb past their territory.

Momiji has an amazing eyesight, being able to see a thousand ri ahead of her (about 4000 kilometers) and posseses a great sense of smell. She's also one of the very few touhou characters that fights with a sword- and perhaps the only one who also has a shield.

Whenever she has free time, she spends it playing shogi with the kappa who live in the lower parts of the mountain. 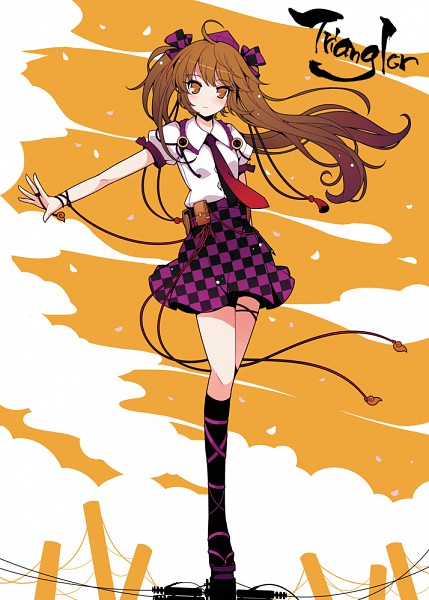 Himekaidou Hatate. She's the only other crow tengu known, and the alternate protagonist of Double Spoiler.

Like Aya, she's also a reporter. Unlike Aya, she doesn't go around collecting news, instead relying on her spirit photography ability to gather material without having to move.

Her occupation as a reporter obviously puts her in direct rivarly with Aya, who also runs a newspaper of her own. Her appearance in double spoiler grants her a lot of dialogue with Aya, time they mostly spend debating about what's the superior method of information gathering and what's the journalistic style that they should use.

In fandom, Hatate is often portrayed as a younger tengu without Aya's experience (but still a lot of her recklessness).

She seems to admire Momiji, being impressed by her vision and sense of smell. Curiously, however, is that fandom is much more likely to portray her as someone obsessed over Aya- sometimes even to the point of being a yandere- than to explore her relationship with Momiji.

In comedic works, she's the embodiment of the annoying paparazzi, someone with a fearful ability for stalking, much to everyone's concern. 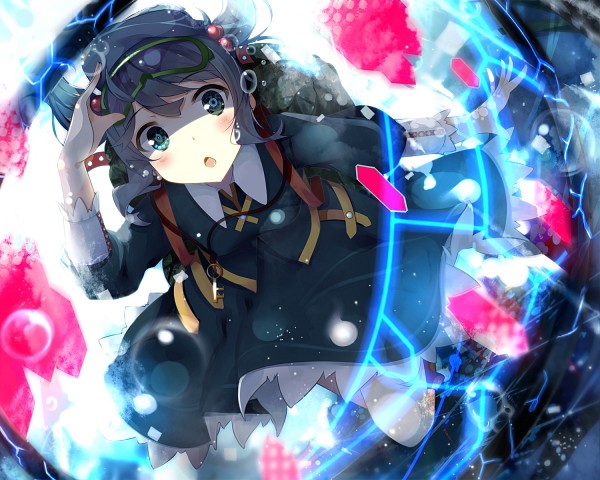 Nitori Kawashiro is a kappa- the only named one in the touhou series. As such, she has the ability to control water.

Much more interesting than that, however, are her skills as an engineer- she has advanced scientific knowledge that she uses to craft all sorts of gadgets she can use in a fight.

Nitori is the personification of greed, fighting for the sake of her stall and the popularity of her gadgets during Hopeless Masquerade, being quick to come up with plots to maximize profits.

She's also a very cheerful character who is warm and kind to her group of friends. Despite all that, she's incredibly shy with strangers.

Out of all the recently used touhou characters, she's the one who keeps the mad scientist mantle, carrying a backpack will all sorts of tools. This is taken further in fandom, making her the living avatar of SCIENCE when apropriate.

From greedy stall owner to mad scientist to shy kappa, she's always an optimistic character. She tries to stop the protagonist in the third stage of Montain of Faith, according to her, for their own sake.

She also convinces Marisa to explore the ruins of the Old Hell of Blazing Flames during the events of Subterranean Animism, when she hears that there are tests related to nuclear energy happening down there. If picked, she will guide Marisa through that game, granting bonuses to her, changing Marisa's shoot-type and offering guidance through dialogue.

And that covers all the tengu and kappa! Look forward to a post on the gods!

And I leave you with Festival Coloring, a remix of several songs in the Mountain of Faith game at once, by Tumeneco & Get in the Ring- listen to it while waiting for the post on Gods!