If you wonder why I'm covering her now, it's because I realized that before writing about Sanae, Youmu, Sakuya and Reisen I'll have to cover their superiors... And while doing the Scarlet sisters first would make the most sense, Yuyuko is too interesting for me not to write about her first. 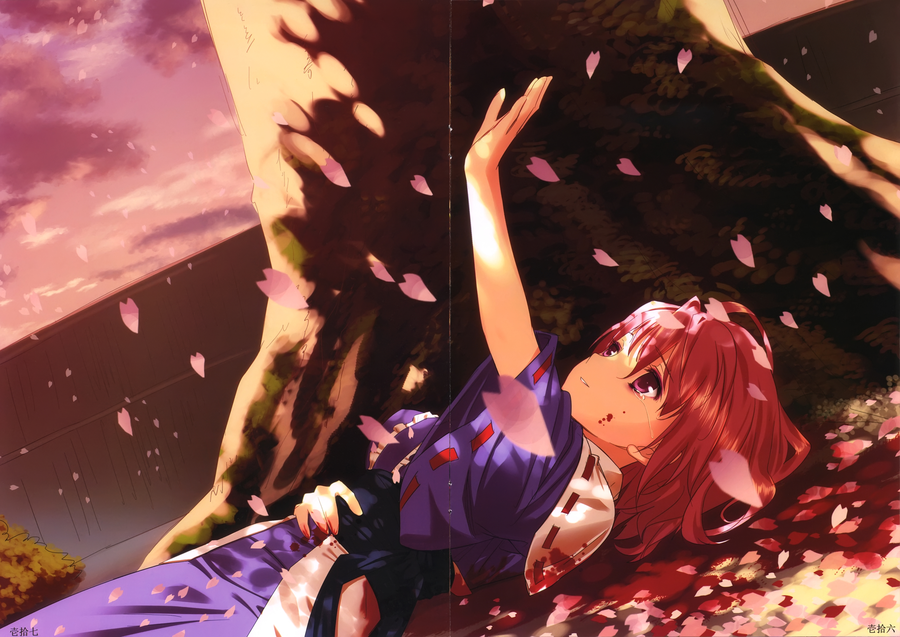 Yuyuko is the 1000-years old ghostly master of the Hakugyokurou- the shrine that overlooks the netherworld. As its mistress, she's has absolute authority over the world of the dead, and is amongst the most powerful beings in the touhou universe- with the ability to instantly kill anything that lives. When killed by this ability, humans will bypass judgment and their souls will be sent to the netherworld, regardless of how saintly or evil they were in life.

Her soul is unable to enter the cycle of reincarnation, as it- and her body- are currently being used as a seal on a powerful and evil youkai tree, the Saigyouji Ayakashi, that lies in the gardens of the Hakugyokurou. In life, she commited suicide for the sake of sealing that tree. She has forgotten about her exact cause of death... And, ironically, she was the perpetrator behind the events of Perfect Cherry Blossom, where she tried to revive the Ayakashi.

Many touhou characters boast a very long lifespan, but even amongst the ones that have lived for thousands of years, she's known to be one of the wisest- and one of the best at hiding that too- she shows a playful, good-humored, whimsical personality, but truthfully, she always knows exactly what's happening, always giving cryptic hints to her servant, the straightfroward katana-wielding half-ghost garderner, Konpaku Youmu, one of the protagonists we'll be covering soon.

In serious works, she's used as a cunning, powerful, wise being with a terrifying power that's an unpredictable wild card. She's not human or youkai- and that shouldn't be forgotten. She's a ghost. And if gensokyo were to crumble to dust, well, it wouldn't particularly concern her now, would it?

In comedic works, she's a hungry ghost that eats everything, including other characters. Because maymays.

And I leave you with a song about Yuyuko from C-Clays. Look forward to the post on Youmu!