Hey Fuwans! I've never done a blog before (or at least, not one that wasn't a work of fiction... is that still a blog?) and therefore I may lack the basic principles of layout, appropriate language, and possibly the most important factor of being slightly interesting. Still, I figured I'd give it a crack, partially to try to understand the events in my life leading up to where I am now and partially to offer my pearls of wisdom on various facets of all things Japanese and fun. I hope that in the very least it's a vaguely entertaining read, and that it might occasionally spark a blob of discussion!

A few days ago I found myself wondering, while browsing the forums in a way that can only be described as a procrastinatory fashion, at what stage in my life I started to become interested in Japanese things. As a child, I never watched Pokémon, nor owned a Nintendo device, nor played Yu-Gi-Oh! round the back of the playground shed (cards were banned at my infant and primary schools for some reason). I used to like the shape of Japan on maps, but then again I liked the shape of many places on maps - including my first national love of Finland. I used to randomly drop Finnish words into conversation (still do on occasion...), spend ages reading instruction manuals with the Finnish language in, and would watch any film with Finnish subtitles because it seemed cool. In some ways, I was a Finland weeb, if that ever could be a thing.

Over time, this spread to an interest in language generally, leading to me collating words from anything I could find in a big diary, divided and split into their separate categories with unconnected words scrawled in. I guess I liked thinking how different these things were. However, even this eventually petered out, and for a while I had little more than a passing inquisitive interest in anything outside of my cosy little life in southeast England.

After school, I went to college, and it was here that I had my first definite experience with things of a Japanese nature. On my second or third day, I started talking to someone - or rather, he started talking to me - about an online roleplaying game which he was an active member of. He was describing to me his current character, telling me all about her personality and appearance, when he said that she was a 'tsundere'. I had no bloody idea what that was, so I naturally asked him (actually, I asked him what's a sundern', which I later found out is a town in Nord Rhine-Westphalia). Following his description, I became curious about why such a trait would exist, although I had no real reference point to go on. This friend went on to play a key role in getting me interested in anime, as at his suggestion I watched Kill La Kill, Boku wa Tomodachi ga Sukunai and Tokyo Ghoul. I sadly don't talk much with him anymore as I left college and we went our separate ways, but we still chat every now and then.

Also while at college, I was surfing that halcyon land of the internet formally known as 4chan, when I came across a Katawa Shoujo thread. I'd seen them previously, but never really paid much attention - but, through a mixture of people talking about 'feels' (I liked to think I was somewhat impervious to emotion...

), cute drawn girls and the only vaguely fun 'community' I could find on /b/, I gave it a bash.

Hanako showing a somewhat accurate portrayal of my experience playing Katawa Shoujo for the first time. 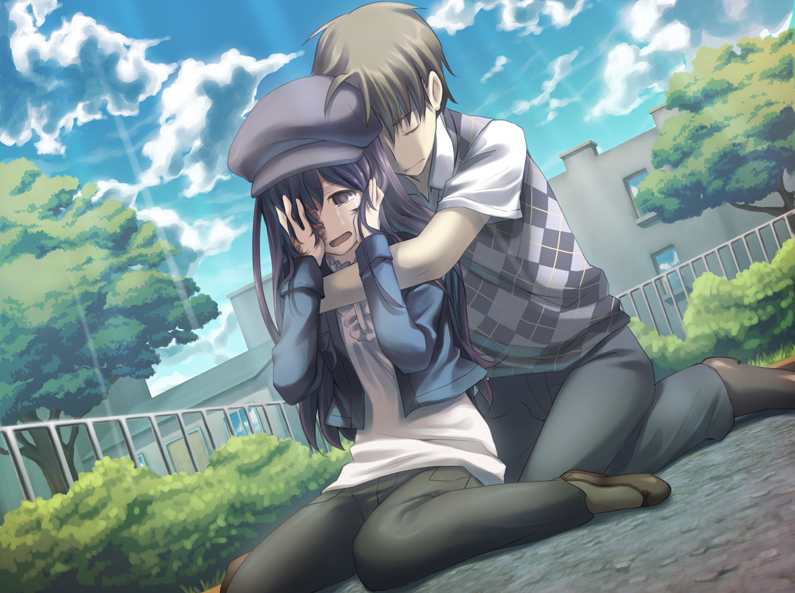 Yeah. That. My outlook on life was pretty shit at the time, so having something which made me feel so strongly felt like some kind of emotional release for me that I had never had before (Wiosna, its theme tune, still makes me feel rather emotional to this day). It was due to this experience that I started to look out for other visual novels - in the following months, I played True Remembrance, Marry Me Misato!, Homeward, Yandere-chan, and my homeboy at college sourced me a copy of Fate/Stay Night, which with my very basic awareness at the time I'd heard was 'alright'. I started to open up socially again - not only in my actual life, but in my virtual life too, as I joined my first internet community in the Katawa Shoujo forums. It was great to be able to talk to such a wide variety of people about something I couldn't adequately discuss with anyone in the 'real world'.

How I learned what a 'yandere' was. Hmm.

Over the course of the next 12 months or so (so I guess April 2014 - April 2015) my interest in things drawn and Japanese-based waned somewhat. After running out of things to say on the KS forums, leaving college and starting university, I just got doing other things - mostly involving playing guitar and habitually cursing my decision of taking mathematics. However, for some reason one day I decided to Google 'visual novels'  and I came across a list of 50 VNs on some site called forums.fuwanovel.net by a user called Kaguya. Now, I'm not gonna say I danced on the rooftops (metaphorically or physically) but needless to say I became very intrigued, researching and reading about and around the titles on this list, as well as starting to make a concerted effort at learning Japanese. At roughly the same time, a friend of mine recommended that I checked out a guy called 'Gackt', in particular his first two albums. I was blown away, and so started to check as many different facets of the Japanese music scene as I could (visual kei, J-Pop, shibuya-kei... and grindcore

). Not two months later, I signed up to this glorious forum and things have only really continued from there!

This past 5 or 6 months have been a bit like Alice wandering through Wonderland for me. Through my investigations into all things Japan, there have been things that have amused me greatly, things that have appalled me, and some that have just left me thinking what a truly interesting place it is. I still consider myself somewhat of a newbie to things, and that is in part what this blog is going to be about: feeling kinda like a tourist to a largely unfamiliar world, and trying to learn as much as possible along the way.

Please be patient with me.