I'll start the guide with a short introduction of Wine

Windows and Mac have been rival for quite some time. Until now, people are still arguing which one is better, simpler, faster, and other things. Seeing how different the architecture of the two, many folks have tried to make files and/or programs unique to one OS to be able to use on the other. One of the most commonly used method to do this is by emulating one OS on another. Programs like Virtual Box and VMware serves this purpose nicely. Unfortunately, emulating an OS requires a quite great number of RAM and the execution process is still slower than execution of the same code by the processor for which the code was compiled.

Then some people create a free and open source compatibility layer software that aims to allow applications designed for Microsoft Windows to run on Unix-like operating systems, namely Wine (Wine Is Not an Emulator). The phrase "wine is not an emulator" is a reference to the fact that no processor code execution emulation occurs when running a Windows application under Wine. In Wine, the Windows application's compiled x86 code runs at full native speed on the computer's x86 processor, just as it does when running under Windows. Windows system services are also supplied by Wine, in the form of wineserver. WIne works by duplicating functions of Windows by providing alternative implementations of the DLLs that Windows programs call, and a process to substitute for the Windows NT kernel.

The Wine project originally released Wine under the same MIT license as the X Window System, but owing to concern about proprietary versions of Wine not contributing their changes back to the core project, work as of March 2002 has used the LGPL for its licensing. The project has proven time-consuming and difficult for the developers, mostly because of incomplete and incorrect documentations of the Windows API. While Microsoft extensively documents most Win32 functions, some areas such as file formats and protocols have no publicly available specification from Microsoft. Microsoft Windows also includes undocumented low-level functions, undocumented behavior and obscure bugs that Wine must duplicate precisely in order to allow some applications to work properly. Consequently, the Wine team has reverse-engineered many function calls and file formats in such areas as thunking.

Wine has been regularly updated until now. The latest version is Wine 1.7.51, the latest stable version is Wine 1.6.2. You can download the source from winehq.org and build make yourself or you can use a pre-configured Wine inside a Winebottler software package. You can download Winebottler here: http://winebottler.kronenberg.org/downloads
For this guide, I'll use the pre-configured Wine 1.7.37 inside the Winebottler package, you can configure or change some things yourself later.

*Note: Wine uses the fonts available in your libraries, so install any fonts your game may require before opening Wine. Another thing to note is that Wine use the same locale as your Mac. To change your Mac locale, open System Preferences. Choose Language & Text. In the Language tab, drag your preferred language to the top. Then in the Formats tab, choose your preferred formats. Make sure that your formats use the correct one according to your language.

After downloading and mounting the DMG, you can open Wine inside the package directly or drag it to the application folder first. Three dialogue boxes would appear. The first is General Preferences, the second is Change Prefix, and the third is Winetricks.

Notice that there is a wine glass icon on your task bar now. Upon clicking this icon, you'll be given several options. 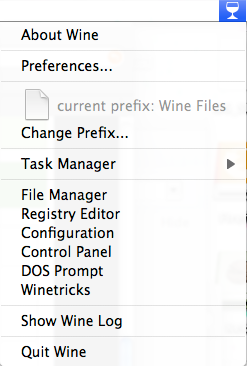 As you see on the picture above, Wine also comes along with a File Manager, Registry Editor, Control Panel, and DOS Prompt. These utilities will help you in setting up your Windows software.
For now, choose Configuration. Soon after, an install dialogue box will appear. It will first create a customprefix.sh (the pre-configured prefix), then gather debug info, then enable coreaudio, colors, antialiasing and flat menus. After registering the truetype fonts, it will show a "prefix created successfully" message. Click OK.

Then you'll get a dialogue box like in the picture below: 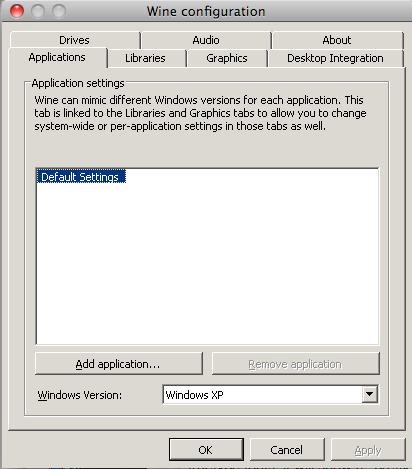 Choose either option you want. As for me, I prefer the top option. Check "Don't show this dialog again" if you want to apply this to all windows application you'll open from now. Then click Go. Then if your game/application is supported by Wine, it will run just fine like on Windows. If not, you'll get an error message of some kind. You can see the list/database of supported applications on WineHQ.org website. For any applications not on the list, try your luck!

In case you're wondering where drive C is, it's in [userAccount]\Wine Files [or whatever your prefix name is]\drive_c.

*Note: Some games' display may not properly shown by Wine 1.5 and above. The examples are Fate/Stay Night and Sharin no Kuni - Himawari no Shoujo. For those games, you may need to use Wine version 1.4 or below. You can download the older versions of Wine here: http://winebottler.kronenberg.org/downloads. Note that Wine 1.4 package from this site has the sound disabled, so your safest bet is to download Wine 1.2.5. Also note that X11 is no longer needed in Wine 1.6 and above, but the X11 driver is still supported, e.g. when running remotely. But the Mac driver requires Mac OS X 10.6 or later, it cannot be built or used on 10.5.

Any questions or feedbacks? Feel free to reply. I'll try to answer as much as I know.


Source: A guide to play VN (and other Windows games) on Mac using Winene