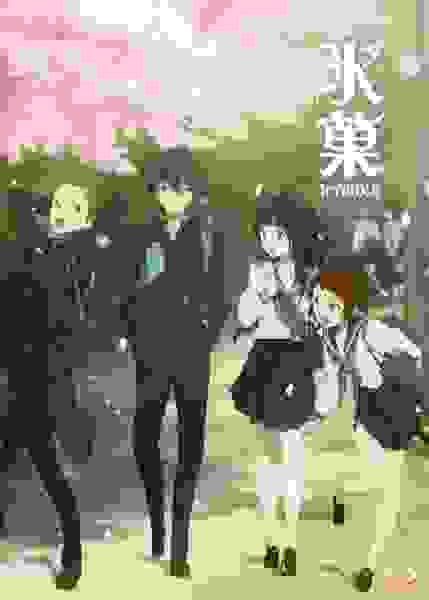 I can sense the raging fanboys as I type the title of this entry, but it's one I promised to do for a while and since I haven't posted anything on this blog in forever, I thought this would be a great way to come back.

So what is wrong with Hyouka? Well, in my opinion, pretty much everything.

I always manage to get myself caught up in one-sided discussion with people defending this anime, and no matter how many good and some even valid points those people make, I simply can not for the life of me understand how Hyouka can even be considered above average.

Let's discuss the first problem I have with Hyouka: The Mysteries.

"Oh boy he's just going to rant about how the mysteries were unimportant isn't he?"

Well, not quite, I understood from the get go this anime was not trying to put forward some kind of deep detective charade and that the mysteries were meant to be simplistic and, for the most part, fairly minimalistic.

The problem I have with the mystery elements in this show is that none of them really matter for anything.

I don't get any sense of accomplishment from seeing the characters solve the already miniscule mysteries that they manage to come across. The characters are always triggered by silly stuff and then turn everything into a detective style, clue gathering and crime solving type of mystery, only to solve it and be done with it. The mysteries are, for the most part, unrelated to the plot (or lack thereof) and don't provide any fun addition to the show, they just feel like pointless ways to drag out and pad a way for a really uninteresting adventure.

You can say all you want about the goal of the show being "simple mystery solving" or whatever, but that doesn't take away the fact that the mysteries, on top of being minimalistic and boring, don't add any value to the plot and are, quite frankly, really unoriginal and boring, which makes for an overall negative watching experience.

Moving on to the second problem I have with this anime: The characters

I absolutely hated almost every single character in Hyouka.

This is the part where it comes more down to personal preferences, but I'll still speak my mind on it.

Chitanda Eru made me want to commit suicide. Her whole character is based off of this retarded gimmick of wanting to solve mysteries for no reason. It's like she's brain dead and all she can say is "I'm curious!". Her character is annoying, doesn't do much for the most part, and just feels like a really sorry excuse for a main heroine of a show. She wasn't fun to watch, I just wanted her to disappear for most part of the show so I wouldn't have to deal with this utter BS.

But what this gimmick really ruins is essentially the show's main gimmick: simple mysteries

You see, simple mysteries can be cool and all, but not when all your main character does is look for the most fucking pointless mystery she can find, and then drag the entire cast with her in order to solve the absolutely tedious mystery. This, in my opinion, is this show's major downfall.

Chitanda Eru was a mistake.

This is how it felt hearing Chitanda say "I'm curious!" 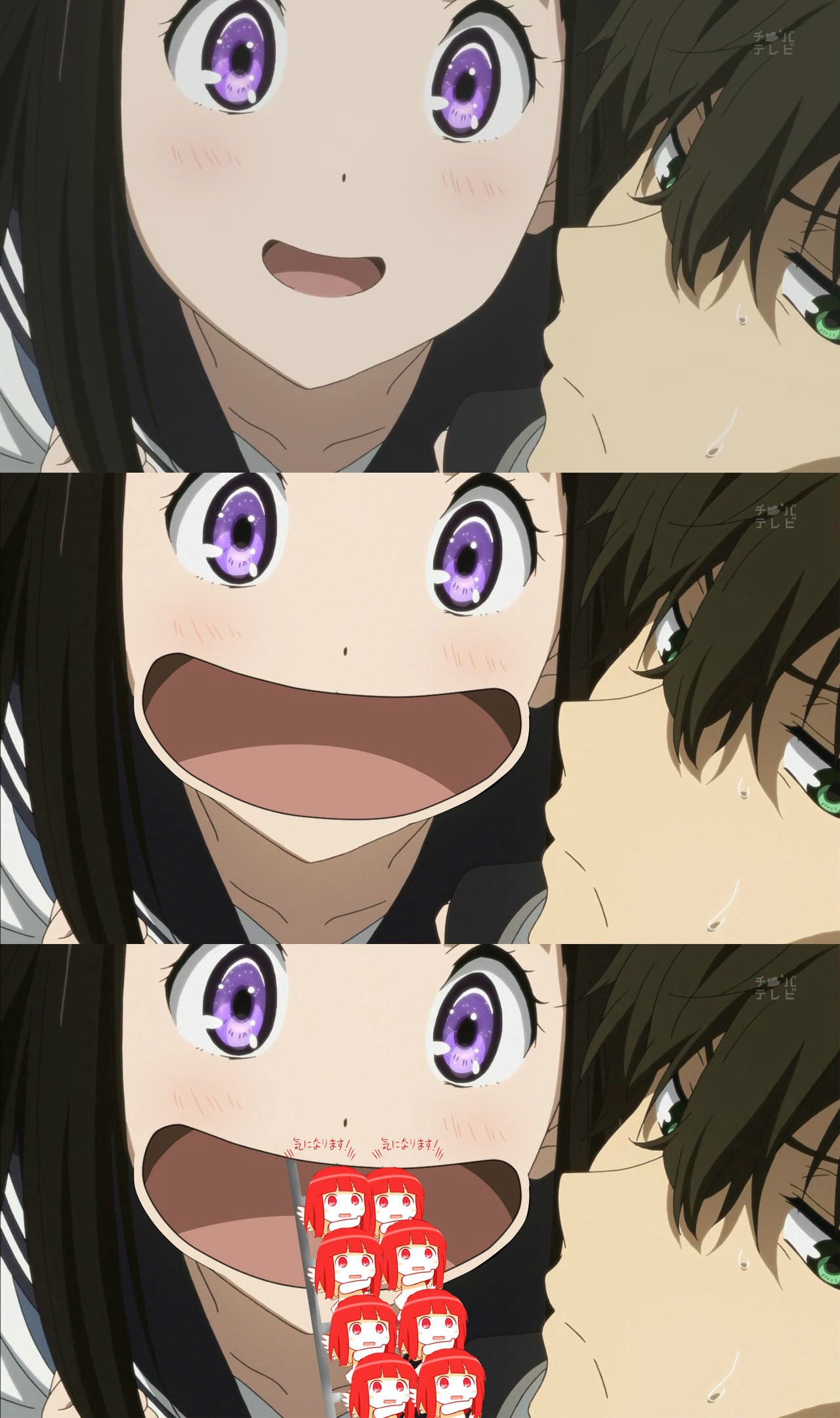 She's a hollow shell of a heroine and god forbid the person who thought she was a good character comes up with more stories like this.

Moving on, the other two (almost side) characters: Satoshi and Mayaka

God, these two made me want to shove forks in my eyes so I wouldn't have to continue watching this appalling show.

Satoshi is by far one of the worst main/side characters I have ever seen, his entire premise for acting the way he does is that he feels inferior to the protagonist. And he makes sure you know this EVERY. SINGLE. TIME.

He never acts on his own accord, he makes himself inferior on purpose and overall he needlessly becomes a hindrance and a nuisance for no apparent reason other than being an edgy emo teenager.

And what's worse, he never evolves from this. He stays like this throughout the whole show. I don't even know who thought this was a good idea.

The last main character I didn't like, Mayaka, is the lesser bad of the main ones. While I was profoundly annoyed by her being hung over such a horrible crush like Satoshi, at the very least I could concede that she was slightly more proactive than him.

Still though, just like her crush, Mayaka often spent her time mopping around and acting like an edgy emo teenager because we all know being a teenager really is tough.

The sole saving grace of the plot, the protagonist Oreki, really can't salvage the whole show, but I will grant that he's the only character with meaningful and interesting development as he goes from being one of those uninterested types to a more proactive character that's interested in stuff (probably affected by the Chitanda virus).

Still though, I find Oreki's character slightly bland as, just like every other character in the show, his sole gimmick is being OP at logic. Which, at the very least, is a good thing to be OP at, but other than that he's not really that interesting to watch as he mostly just gets dragged around by people.

But since he's the most intuitive of the group, I'll say that he's the sole character I kind of liked in the show.

Moving on to the third and last problem I have with this show: The pacing and the story

When you have a 22 episode show, you have to make sure you maintain a good pacing and have an engaging story so your viewers really want to stick with you until the end. Sadly, Hyouka fails on this aspect as well.

The uninteresting and unengaging mysteries and the generally slow paced and easygoing story only add up to an ultimately boring viewing experience that never managed to make me want to keep watching, but rather it made me feel like I was forcing myself to press on to see if ultimately there would be something worth praising at the end of the tunnel.

Hyouka is a show with basically no plot, and shows with no plots are something I'm known to like even, but when you have no plot, you need good characterization, you need your characters to be engaging and make things happen, and Hyouka fails on pretty much every aspect of this, making for one of the worst anime experiences I've had.

This anime might have been produced with a big budget (based Unlimited KyoAni Works), but if you have a bad source material, no matter how much you sugarcoat it, no matter how many directing tricks you use, it just doesn't work, and Hyouka will always be living proof of it.

To those of you who defend Hyouka, I'm sorry, you're allowed to like this anime, really, I understand all the trickery that went behind in making it, I just think that it's ultimately really non engaging and boring and overall a sugercoated turd that I can not wrap my head around no matter how many times I watch it.

Just ask yourself this: Do you find an anime based on pointless mysteries that are constantly forced upon you by an annoying teen girl that constantly shouts "I'm curious!" to be fun?

If you do, I guess I have nothing to say to you.

If you don't, then I hope you understand why I don't like Hyouka as well.