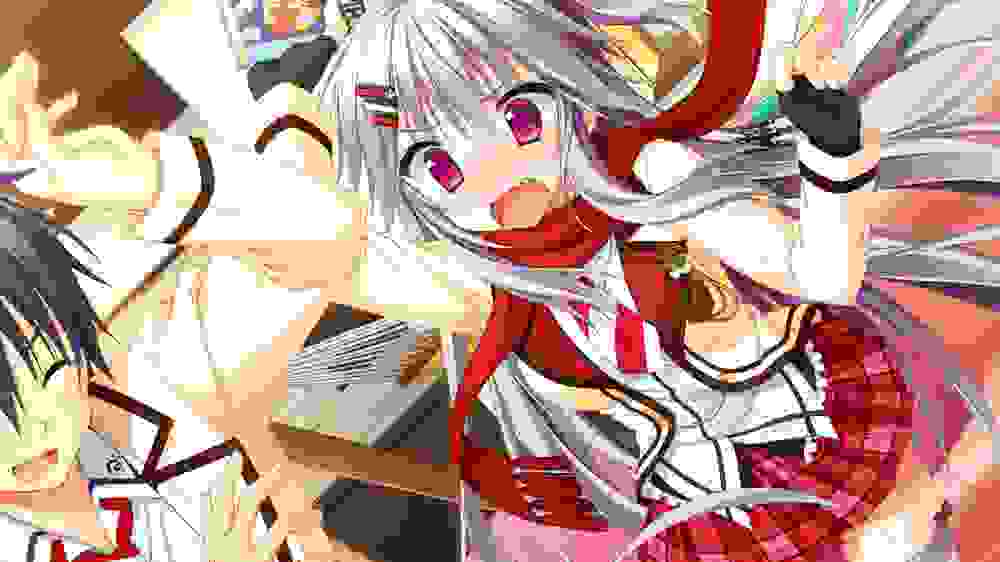 So far this VN takes the form of a straight-out high-quality charage, with some nakige elements. The protagonist, Yuuma, is like the ultimate lazy guy... so much so that he researched ergonomics solely so he could create the ultimate pillow for sleeping in class.

The heroines are Ayano - the much-older senpai who is a genius but has been held back more than any other person in the history of the school -, Inori - a lone-wolf girl who hates people who ask her personal questions -, Wakaba - the protagonist's best female friend, who acts more like a guy than a girl-, and Hikari - the 'traditional' normal girl who fell in love with the protagonist at first sight.

The common route is surprisingly short, with the story splitting off relatively quickly after a set if meaningless formalities in the form of 'choices' (choosing girls off a map for their scenes is a horrible way of picking your path). That said, it is generally amusing, and it does serve the purpose of introducing you to the characters without taking up three quarters of the game like many charage do.

Inori's path was pretty emotional, at least partly because the protagonist and her are complete opposites in nature, while being similar in certain aspects. I did find it a bit irritating how the protagonist took forever to figure out he was in love with her and the way Inori spent so much time fighting her own realization. However, the actual relationship and path were good - though I did find it really, really predictable when it came to the drama. Fortunately, it manages to avoid the crime of being a series of endless ichaicha scenes, limiting it to a few events and one serious date.

Once again - like many charage paths - I felt seriously dissatisfied with the epilogue, due both to its short length and lack of content.