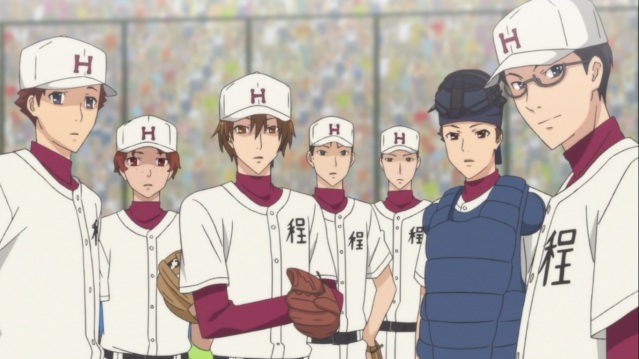 (An old parody I wrote in 2013, I'm reposting here for general amusement. See the original forum thread for initial reactions.)

It’s a beautiful day for baseball today in Eroge Stadium. I’m your host Sanahtlig here to provide commentary for Visual Novel Translation TV. Today the Localizers play against the Fan Translators in a special Western League All-Star game. This should be an interesting matchup. On the Localizers team we have representatives from Mangagamer including the rising star Kouryuu, as well as veterans from JAST USA including the well known Peter Payne. The Fan Translators are a truly diverse bunch of big names playing together for the first time ever. We have Ixrec from Amaterasu, Moogy from TLWiki, Haeleth, and Aaeru from Fuwanovel. It’ll be interesting to see how they interact as a team.

The Localizers are up to bat first. But there seems to be a delay. The first batter from Mangagamer appears to have brought a large stick instead of a bat! He seems to be arguing with the umpire. Let’s listen in.

Umpire: You can’t just waltz in here with a stick for a bat. Go borrow a real bat from one of the JAST players!

Mangagamer player: ALL YOUR BASE ARE BELONG TO US!

The Mangagamer player just took off and started running the bases before the game even started! What is he doing??? We’ll be back after a word from our sponsors.

VNDB, a compendium of visual novel knowledge, by you, for you: an oasis where you can request visual novel recommendations, speak freely, and engage in enlightened discussions. Please click our affiliates so we don't go broke!

We’re back, and this time Peter Payne is up to bat with 1 out and 1 expelled player. Here’s the pitch and—it’s a hit! Wait, what is he doing? He’s just standing there! Let’s zoom in for a closer look.

On close examination, Peter is actually shuffling towards 1st base so slow it’s barely perceptible from a distance. He makes it a few feet before being tagged out by the catcher.

That’s two outs folks. Up to bat next is Kouryuu, Mangagamer’s newest darling. Here’s the pitch and—it’s a line drive. This—

At that moment the microphone fades out. The game ensues soundless until a member from Mangagamer finally strikes out, ending the round.

We’re back at Eroge Stadium. We apologize for the technical difficulties. A member from Mangagamer barged in and carried off the microphone, claiming we didn’t have rights to broadcast audio during their lineup. We’re assured now that the problem has been cleared up.

The Localizers are taking to the field. Wait, what is this? Mangagamer’s players have taken to the field without clothes! This isn’t baseball, this is pornography! Outrageous! JAST’s entire bench has rushed onto the field to subdue them. They appear to be re-clothing the Mangagamer players—is that 2 bras I see??? We’ll be back after a commercial break.

Mangagamer staff A: Somebody set us up the bomb!

Mangagamer staff B: What you say?!

We’re back and the game looks ready to resume. First up to bat is Haeleth, the oldest member on the team and a true league veteran. He seems to be getting some boos from the audience…hmm? Haeleth just threw down his bat and walked out of the stadium! Amazing! Looks like the Fan Translators are down one member!

Next up to bat is Moogy. Moogy is known for his often uncomplimentary remarks for his fellow players. Moogy steps up to bat and—he seems to be shouting something at the Fan Translator dug out. He’s throwing down his bat and…he just walked out into the field? He seems to have joined the Localizers! What an unexpected development!

Next up is Ixrec. This guy is a monster folks; he has the highest RBI in the entire league. Here’s the pitch, and—it’s a hard hit to right field! Peter Payne scrambles for the ball…what is he doing? Is he riding a wheelchair in the grass? Why is he in a wheelchair?! Ixrec scores! And he’s running around the bases again! Look at him go! One of the umpires from the Japanese league, Age, has grabbed Ixrec and is trying to stop him! Oh my, Ixrec just kicked Age in the balls and is running the bases again! Unbelievable! We’ll be back after a commercial break.

We’re back. Age has left the game, and I doubt we’ll see him back for another Western League game in the near future. We have a Fan Translator on 1st base from a single up the middle.

Next up is Aaeru. A relative newcomer, Aaeru doesn’t seem to be getting along too well with her fellow Fan Translators. But in this game it’s results that count, which I’m sure Aaeru will show us today.

Here comes the pitch…it’s a fast line drive to left field! That’s a base hit! Wait! Aaeru appears to making a beeline for 3rd base! What is she doing?! She’s stopped on 3rd base and doesn’t seem to be budging. It appears that she’s decided to run the bases in reverse order! What are the umpires doing?! The other Fan Translators are snickering, but no one seems to be stopping her. That leaves a player each on 2nd and 3rd base.

Next up to bat is…Moogy? Did he switch sides again?! It’s probably best not to think too hard about this. Here’s the pitch—and it’s a pop up to right field! Peter goes for the ball—and his wheelchair tips over! The Fan Translators are running the bases and—Aaeru just collided with her fellow Fan Translator! Who would've seen that coming?! She’s getting up, and--

Mangagamer 3rd baseman: ALL YOUR BASE ARE BELONG TO US!

The Mangagamer 3rd baseman just clubbed her over the head with 3rd base! Ouch! Moogy runs up to her and…he’s kicking her while she’s down! I don’t know who’s the greater bastard: Aaeru, the Mangagamer 3rd baseman, or Moogy! Ixrec runs out of the dugout—he’s running the bases again! Someone catch him! What the hell??? The Mangagamer players are stripping again! Peter is still crawling out in right field towards the ball! This is utter chaos folks! It’s a wacky free-for-all today in Eroge Stadium. I’ve never seen such incredible dysfunction in all my days as an Eroge Stadium broadcaster. Will Moogy stop kicking Aaeru? Will Mangagamer stop turning this into a live porn event? Will Ixrec leave any points for anyone else? Will Peter ever get the damn ball? Stay tuned to Visual Novel Translation TV!

In the meantime, let's get some comments from the stadium audience.