This is a condensed version of the full article which can be found on my Main Blog Here.

When Everything Goes Wrong

A good story is often defined by its ending and a bad one can be redeemed by it. Visual novels are no exception to this rule and must contend with this opportunity multiple times over the course of the game. The most common form of endings used in visual novels are the Good and True Endings, but there are also some games which use Bad Endings. This kind of ending is one in which the protagonist fails in some fashion based on the players choices and it is generally treated as a short optional side path to expand the players experiences. Handling a Bad Ending properly can be a difficult task as they are inherently negative by nature and can make the player feel as if they are being unfairly punished.

Bad Endings can be broadly split into two types, the Tragic End, where events end poorly for everyone involved, and the Dead End, where the protagonist simply dies. There is obviously a degree of overlap between the two types and this will be explored more as we address them separately. Their are other mediums which have the player character die based on the players choices like with Dead Ends, most notably choose your own adventure books, but none which place the emphasis on them which visual novels do with Tragic Ends. This strange evolution is what this article will be exploring as it details the aspects and usage of the Bad Ending and why it fits some games but not others.

Of the two types of Bad Endings the Tragic End is by far the most common simply because it can fit into any genre and does not require any form of character death. This allows it to sit alongside a more grounded or personal drama oriented story. Death can still be a part of a Tragic End but it is rarely the defining element and as a result it can explore the outcomes of a failure in an expansive manner not present in Dead Ends.

One important feature of a Tragic End is how it expands the narrative in some fashion, be this hinting at a future revelation or showing another side of a character which might otherwise have been hidden. This offer the visual novel a chance to allow the player to explore the narrative and feel rewarded with the sense of discovery and the idea that they have had a glimpse behind the curtain. On the flip side the Tragic End can serve the same tension providing purpose as a Dead End and be something the player wants to avoid so they can have a happy ending for the characters they are invested in, which keeps them on their toes. Player engagement is one of the most important aspects for a game and the use of Tragic Ends provides it with ease, but to really explore how they achieve this we will need to look a few examples of good implementations of them.

Let’s start with a simple example in the form of Himawari. This game utilises a series of Tragic Ends during its opening section which can be reached by making incorrect choices. These fall under the peek behind the curtain type of Tragic End as Himawari initially presents itself as a simple slice of life story with an eccentric cast and these peeks act as subtle confirmation to the player that all is not as it seems. Strange character behaviour and unexplained events define these endings and each one is given a unique piece of the puzzle to tantalise the player with. Himawari also understands when to stop using Tragic Ends. Once the big twist is revealed in the second section and the curtain is pulled back there is no longer any need to peek behind it and so Tragic Ends stop appearing after this point. In many ways it is the poster child of how to utilise Tragic Ends in the most basic manner and how powerful that effect can be for keeping the player engaged when nothing appears to be happening on the surface without forcing this content down their throat.

Virtue’s Last Reward handles its Tragic Ends in a very different way, it makes them a mandatory part of the games structure. Almost all endings before the True Ending are some form of Tragic End and serve the purpose of pushing the narrative forward in various ways while also providing the idea of being trapped in a more meta narrative sense. This all fits into the death game style of story which Virtue’s Last Reward tells. The game could have got away with simple Dead Ends if building tension was what it needed from its endings. However, instead Tragic Ends were used to help build out the world and mysteries while the life and death drama plays out to its sad conclusion. By using so many negative endings the game creates a maze like quality to its narrative which encourages the player to try and find the way out for both themselves and the characters they have grown attached to. It is this blending of motivation and mystery building which makes Virtue’s Last Reward an excellent example of how Tragic Ends can be used to clever effect. In contrast to the complex possibilities offered by the Tragic End, the Dead End results simply in the swift death of the player character or another key character. Dead Ends are often short in length and are the closest visual novels come to having a simple game over screen, but unlike them Dead Ends have a degree of narrative flexibility.

The most common use of the Dead End is to build tension within a visual novel by offering a fail state. This works to sell the lethality of a situation though showing it rather than simply implying it, which allows the story to keep a sense of suspense throughout its length rather than the player becoming accustomed to the threat of death. It is surprising how a sudden death from a simple choice can wake the player up and make them think more carefully about what they are doing in order to avoid a similar fate again.

Fate Stay Night is the poster child for the standard use of Dead Ends to create tension. It is visual novel centred around life and death magical battles so it offers many opportunities to provide the player with a choice which could lead to their death in combat. The constant presence of death helps sell the battle royale as dangerous and its participants as superpowered warriors who are not to be taken lightly. Without the Dead Ends the length of Fate Stay Night would have led to the player no longer finding the battles tense since they had seen similar fights before, but the constant threat of a Dead End makes every choice something they have to carefully consider. There are so many Dead Ends in the game that it keeps track of which ones you have achieved turning it into a collection element with a small reward for getting all of them. If there is one problem with how Fate Stay Night handles Dead Ends it is that sometime it can be hard to determine why you got a specific ending even with the hint system in place and this can lead to frustration for the player. 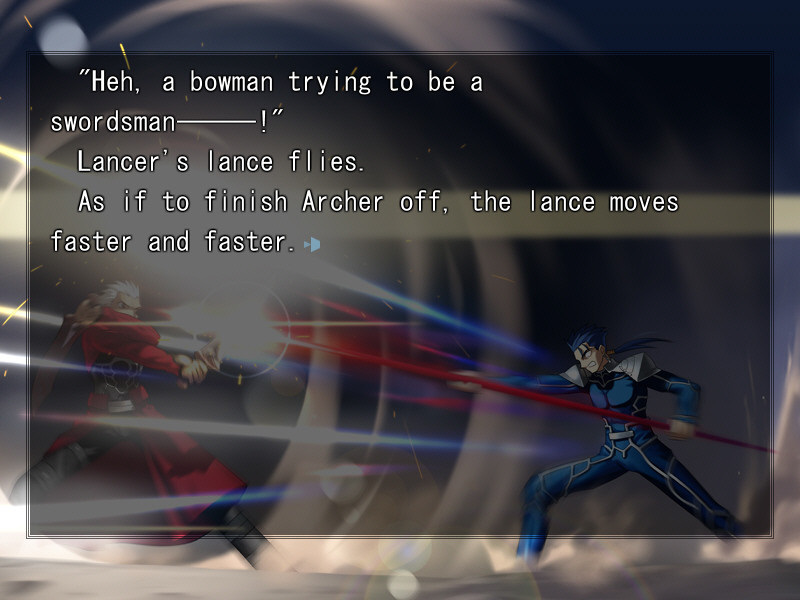 If Bad Endings are as useful and expansive, as has been shown here, why do so few visual novels use them? The simple answer is the game’s genre determines whether the negative features of Bad Endings are necessary for them. For example, one of the most common genres of visual novel is romance / slice of life and it generally steers clear of anything serious and instead want its tone to be light and upbeat in nature which is highly incompatible with Bad Endings. On top of this those genres which are more compatible with the negative tone of Bad Endings might choose not to use them because of the potential to upset the game’s pacing by diverting the player onto a side path which they might not want to see. Those visual novels which do use Bad Endings do so since it fits the type of narrative they are trying to tell.

There are a wealth of possibilities when it comes to the forms Bad Endings can take and their use within a visual novel’s narrative. The Tragic End offers a chance to explore a side of the world and characters that might not be possible otherwise and Dead Ends give tension and stakes to events. Of course you want to know if you should include a type of Bad Ending in your visual novel and the answer to that is based on if it suits the story you are trying to tell. Do you need the tension and mystery they add and are willing to pay the cost of potential pacing issues and player confusion when they make a wrong choice? If you answered yes then it might fit into your story, but be careful since the trade off may effect you in ways you do not expect like the confusion over the cause of a Dead End as in Fate Stay Night. Overall, the Bad Ending and its mutations are a strange feature of visual novels and it will be interesting to see how they develop in future.