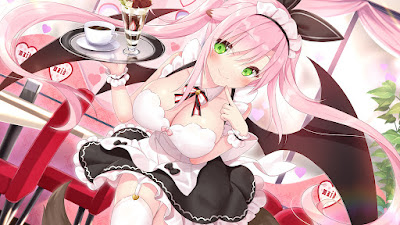 Based on the doujinshi series of the same name, this visual novel puts you in the shoes of the protagonist, an unassuming college student who lives by himself. Life goes from ordinary to the extraordinary very quickly when you stumble upon a girl collapsed in front of your apartment building. What makes this even more unusual are the cat ears, tail and wings on her body. Not wanting to abandon her, you offer to take her home and offer her food. While she tries to put on a brave front, her grumbling stomach says otherwise.
It turns out she is no ordinary girl but is a Cherubim, a half animal, half angel girl from Heaven. While she normally travels down to Earth to do her job, she ends up being exiled from Heaven and while searching for a certain important object, she becomes exhausted and collapses by the side of the road. One thing leads to another and you find yourself with a new roommate. Her energy and smile brightens up your day and pretty soon a close friendship blossoms into something else as you begin to develop feelings for her. It’s never a dull moment with the cheerful, naively honest, and rambunctious Mint by your side, which is only amplified when Lily, a half-demon and close friend of Mint’s, suddenly shows up on your doorstep in all her over-the-top flirtatious glory. How will your life change in your lovey-dovey life alongside the Cherubim, Mint?
Partial localized release has English reviews.
2. Dreamin' Her -Boku wa, Kanojo no Yume o Miru.- Dreamin' Her -僕は、彼女の夢を見る。- [220428] LIFE0 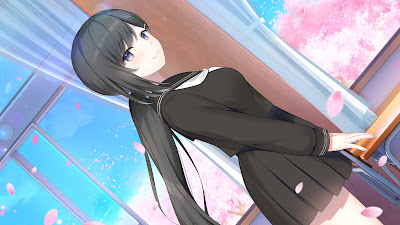 From the white sky, the snow fall and running down her cheeks.
We were holding hands, lying on the snow.
When our eyes met, she smiles at me――
――That was the dream I saw when I was a child.
On the day when the town turned white by the snow, me and my childhood friend Mirai lying on the snow.
I wanna stay as it is.
That was what I thought when I was young.
I grew up with a faint love.
I was certain that our feelings were the same.
Until that day.
"Sorry. I'm sorry, Ao. But... I'm sorry."
It wasn't supposed to be like that. It wasn't supposed to be that way.
She was the only one who support my heart, of me who doesn't dream of a great one.
I thought she would be with me no matter what.
But she went away.
Feeling despair of everything, getting up from bed becoming troublesome.
I started to having doubt on "reason for living in this meaningless world"――
Then I, had this particular dream.
Beautiful coast.
White sand beach, calming pale pink sea, a lighthouse that can bee seen in the distance――
――"She" was there.
Mirai's look alike, an ideal girlfriend who will never betray.
Not much different from previous LIFE0 all-age projects except that now it's an even more straightforward single heroine story which sacrifices complexity in favor of a seemingly bigger romance impact.
3. Futamata Ren'ai フタマタ恋愛 [220428] ASa Project An absolutely lovely awakening: The chirping of the birds... and somebody's warmth.
"I'll have you take responsibility so... um... you'll be my boyfriend from now on, got it?"
He was supposed to be taking care of a girl he met at a mixer, Toiro Kirame. However, he was mistaken for having a one-night stand with her; the both of them unable to comprehend the situation, the protagonist, Koga Nao, is made to take responsibility.
"I'll agree to go out with you! Be glad, Koga-kun."
However, his unrequited love, Nobuta Yua, suddenly declares that they will be dating.
Having been expressing his love for a while, he is unable to decline at that point----
And, just like that, having made two girlfriends, our protagonist happily makes his debut as a two-timing sack of shit.
Maintaining his two relationships, he worries about what he would do from then on, then his relationships begin to change. And, what's more, his girlfriends begin to suspect him, driving him further and further up the wall.
Will he dive into the quicksand of love that threatens to sink him further than two-timing? Or, will he seek out a happy ending where nobody is hurt?
How will this story that begins with two spontaneous romances unfold? Thoroughly unpredictable, the curtain draws on this quagmire of a love-comedy!
ASa Project has proved to be one of the most perspective existing brands. Even with this lightweight plot and significant H tilt, comedy is as hilarious as ever
4. Otome to Fureau, Hitotsu Yane no Shita 乙女とふれあう、ひとつ屋根の下 [220428] ensemble SWEET 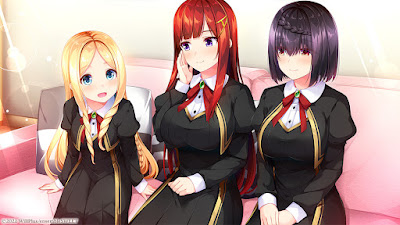 A mysterious yuri novelist is currently in a slump for almost a year. He even tried to wear a woman dress. His sister suggested working as administrator in girl dormitory . Of course he needs to cross-dress all the time there. Will he be able to conceal identity living alongside three beautiful girls?
I'm not going to look into another ensemble trap game
BLOCKED