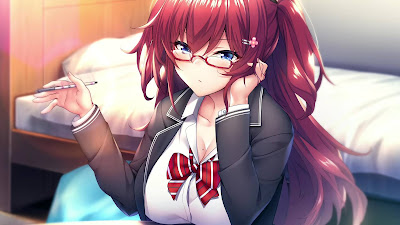 "When I grow up, I'm going to marry you, Onii-chan!"
This kind of promise is the least likely to be kept in the world.
At least, the protagonist, Yunagimoto Yuusuke, believed as much when he thought back on the distant memory of that promise.
Then, one day, a younger female relative of his showed up at the apartment where he was living alone and said "I'm old enough to get married now. Will you keep your promise and take me as your wife?"
Vanilla nukige
2. DraPri Guu-ta-life 2 竜姫ぐーたらいふ 2  [210625] Whirlpool 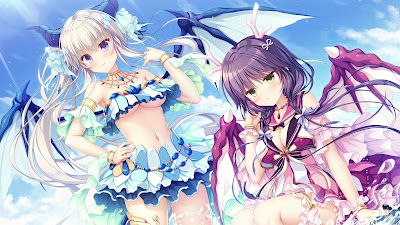 It has been a few weeks since Judgment Day, when dragons filled the skies of the world.
People were trying to adjust to a new normal life.
However, in the distant skies of the… Star world, a situation was brewing.
The dragons are split in half over the treatment of humanity.
In the midst of this, the king of the dragons of the “sea” and “water” factions descends to earth (at his own discretion).
In the blink of an eye, he chases humans away from the world’s oceans and declares, “This ocean belongs to us,” and “Humans are off limits."
The world, deprived of summer resorts, fishing rights, and even the right to travel freely between nations, is in a state of great weakness.
And a few days later…
Takeshi and Haru are still lazing around, and Suzuka is taking care of them, when Dorami comes to invite them for a sea vacation.
Although they feel some kind of suspicion, they can’t resist the temptation of the sea.
What awaits Haru and her friends when they stand in the sea, which has now become a magical land ruled by the sea dragon tribe?
(For now, we’ll have a barbecue and fireworks.)
For those who liked prequel
3. HajiLove -Making * Lovers- ハジラブ -Making＊Lovers-  [210625] Smee 1 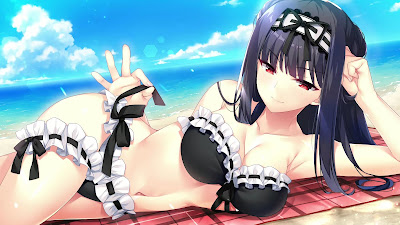 "Dating someone that's not your soul mate is a waste of time.
The only kind relationship I'm interested in is one that's sure to have a happy ending.
If you're going to fall in love, fall in love once.
Find your ideal partner, a person that you love so much that it feels like you're burning up inside."
My beliefs about love were abnormal, clearly. My classmates certainly seemed willing to hookup with anything that walked, and they appeared happy enough.
But I realized something in my 2nd year of high school. My soul mate wasn't going to just fall out of the sky into my lap. I wanted to experience a real, flesh and blood love, not some made up fairly tale version of it that only existed in my head.
-The childhood friend that wants to spend her life at your side-
-The classmate that dreams of meeting her knight in shining armor-
-The underclassman that wants to become an expert at romance-
-The upperclassman that longs to bring happiness to the family she holds dear-
My meeting these girls was nothing but a series of coincidences.
But if what happens next is up to me, then maybe I can decide it starts right here, right now.
I won't know if I'm making the right moves or not until this is all over.
All I know is that the only one that can turn a chance encounter into true love is me.
----
The heroine and protagonist suddenly start dating, and as they spend time together, they fall in love for real.
This work inherits the concept and world view of its predecessor, "Making*Lovers". It is a student version with all the heroines attending a school, with the concept of the shape of love that develops after a relationship is formed and the element of "shyness" is strengthened.
There are English reviews
4. Lilium Wedding Plan リリウム・ウェディングプラン  [210625] Barista Lab 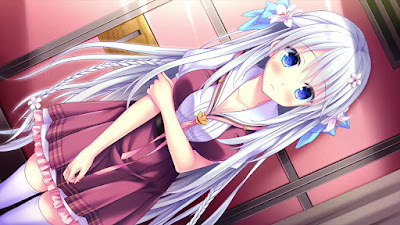 Goddess promised marriage when she was young. Main character returns to grandparents' house for a short time. There he is met by the goddess
Lilium who calls herself his wife.
Vanilla nukige
5. Ryuusei World Actor: Badge & Dagger 流星ワールドアクター Badge & Dagger  [210625] Heliodor 1 2 3 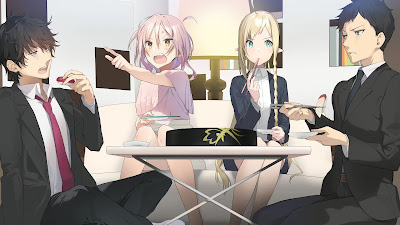 The Seventh Republic—the city despised by the sun.
Sunlight hasn't reached here since the last great war, and the shadows teem with vicious criminals.
With evil threatening on every side, the National Police Agency is a stronghold of justice.
Detective Ruka Hiryu belongs to the 13th Division, nicknamed the Sideliners, and treated like shit by the rest of the force.
With no major incidents to keep him distracted, Ruka has been investigating the sealed Cult Massacre case in secret.
Things change when the 13th picks up two new members.
The agency is shaken with unreliable rumors about the semi-mythical Shining Union, and as suspicions and conjecture fly like bullets, will Ruka, the 13th, and the NPA be unscathed?
There are English reviews
6. IdolDays 愛怒流でいず [210617] iMel Inc. 1 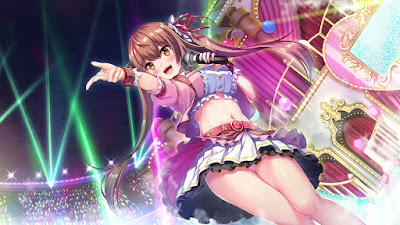 A young man working at an Akihabara-based agency that manages underground idol groups has been ordered to discover new idols by his boss. Now, he's at the end of his rope.
The protagonist is at a loss, finding that girls with the talent to become the kind of idol he's picturing are few and far between. He's sitting defeated on a park bench when he comes across a girl singing to herself while feeding some cats.
The girl's song is delicate, but her voice shakes him to the core. His heart stolen in an instant, the protagonist turns to the girl and tries to scout her to become an idol. However, the girl flatly refuses him, saying the idea is stupid, only to then disappear.
The next day, the protagonist gets called into the office, where he learns that the daughter of their sponsor has been hired as a member of staff and gets assigned to be her training supervisor. The girl who appears before the bewildered young man is the same one who turned down his scouting offer the day before.
The girl's name is Tsubaki Akanesaki. Though she's had several jobs, she got fired from all of them for getting into fights. What does fate have in store for a young man who's been assigned to train a girl whose a total delinquent?!
Game is released in English and has English reviews