Jump to content
No-o-o. Micchi stopped updating blog and lots of releases ended up without translated description, as expected. With trilogy at its end, can finally nominate Silverio Ragnarok for this month and most probably for this year. Looks like another series reached conclusion, so can now call 9 -Nine- Yukiiro Yukihana Yukinoato a masterpiece.
1. Bokuhime Project ボク姫PROJECT [200423] Wizard Soft 1 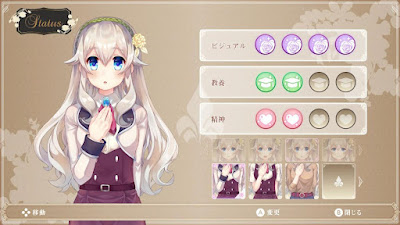 Protagonist Minato Ikusa's sister Marika has fallen into a coma following an incident at the Yuriai Private Academy for refined young ladies, so he infiltrates the school by disguising himself as a woman and enrolling under the name "Erika" to investigate.
As part of this, he needs to become the most beautiful woman of the school and win a seat at the Four Princesses organization; to do this, he practices his cross-dressing skills, and partakes in a number of activities to increase his femininity, such as swimming lessons and cosplay.
There is an English review
2. 9 -Nine- Yukiiro Yukihana Yukinoato 9-nine-ゆきいろゆきはなゆきのあと [200424] Palette 1 2 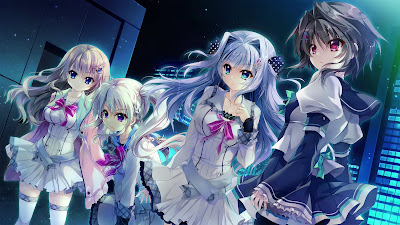 This is the fourth game in Palette’s 9-nine- series. 9-nine- takes place in the run-of-the-mill college town of Shiromitsugawa where an earthquake breaks a sacred artifact from the Shrine of the White Serpent, unleashing jewelry-like items that bestow their holder's special powers called "Artifacts" from a parallel world. When an incident involving a power that transcends human comprehension, Kakeru Niimi, our protagonist, investigates several branches (parallel worlds) in order to settle the matter.
With the mastermind finally revealed, Sophitia, otherworldly entity set to reclaim the Artifacts, tells him to defeat this person pulling the strings. The first day, the day that the festival was cancelled due to the earthquake back at the shrine—Kakeru is now equipped with memories from every branch and is on the move to solve this conflict.
Amidst this, a girl with a strong sense of justice from Kuho Girls Academy, Noa Yuuki, has an ability that seems to be the key to defeating the mastermind. Knowing this, Kakeru divulges about the events in other branches to her. All the while uncovering the secrets behind why the Artifacts come to this world, settling the scores with the Evil Eye's User, what will be the fate of these young men and women with otherworldly power at the fingertips?
There are English reviews.
3. Amakano 2 アマカノ２ [200424] Azarashi Soft 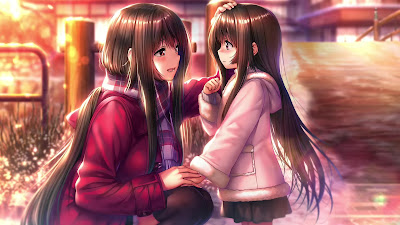 When something new begins, it tends to do so suddenly and unexpectedly.
Returning from the countryside on the bullet train, a girl, Kurohime Yuuhi, is assigned the seat next to you.
You learn a cousin you have barely spoken to, Himiyama Rei, is going to be living with you.
These two encounters, along with your childhood friend, Tsutamachi Chitose, who lives next door and is older than you, will, like the changing color of the autumn leaves, bring color to your heretofore unchanging life.
A chance encounter creates a beginning.
A relationship blossoms from a distant connection.
A friendship becomes something more.
As autumn deepens, you start to feel like you may just fall in love.
The third game in the series, so people should have a formed an opinion by now
4. Denshi Otome ga Arawareta! Command!? 電子処女が現れた！ コマンド！？ [200424] Akabei Soft2 1 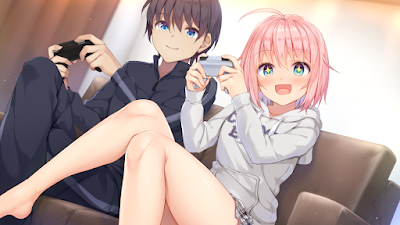 Near Future. Keiji is an active school student and a professional gamer who is also a fan of the mysterious V-tuber Haruka Kanata. One day sudden power outrage happens, and v-tuber jumps out of the monitor. This is a fun and bright love story between them.
There is an English review
5. Hakata Dyingzombies ~Second Chance for Beautiful Live~ 墓多DYINGZOMBIES～Second Chance for BEAUTIFUL LIVE～  [200424] Akabei Soft3 1 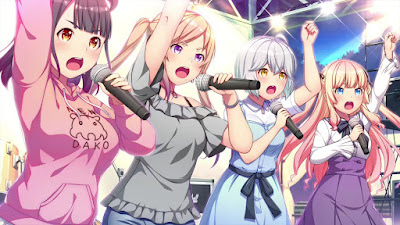 This is a city full of zombies. Every day they work hard to live without any hope for bright future. However, even here there are zombie girls who have not lost their dreams. Main character is a former intelligence agent. He meets a starting idol and becomes a producer.
There is an English review
6. Shirotsume Yubiwa ~Yotsugo no Hanayome: Ore, Zen'in Erabimashita~ 白詰指輪 ～四つ娘の花嫁 俺、全員選びました～  [200424] Akabei Soft3 1 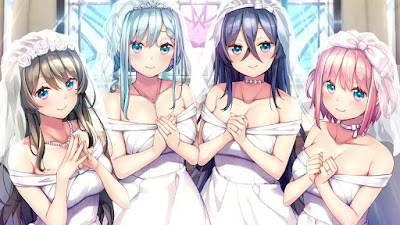 Masamune, the protagonist, spent much of his life alone. His parents were often away on business trips, and so he often yearned for the warmth and love of a normal family. When he was younger, both his parents had to leave at the same time for business, and he was sent to stay with his relatives.
It was then that he met the four girls who would become his life partners.
The caring Mei who loves to dote on people.
The hard working but easily embarrassed Futaba.
Gamer and partner-in-crime, Mimimi.
The naive and energetic Shiika who enjoys athletics.
To Masamune, who had spent most of his life alone until then, the two years he lived there were his most precious memories.
Time passed. It is now spring and Masamune is in his second year of high school.
Masamune's parents are leaving him behind for business again, and it has been decided that he will be living with the four sisters once again. Masamune is excited to be reunited with the girls he thinks of as his beloved family, but they almost immediately try to get him to see them not as family, but as women!
The four sisters have been head over heels for Masamune ever since they were kids. Having been finally reunited after ten long years, their hearts brimming with love and affection for him, the girls are practically itching to get in his pants.
With these five youths living under one roof, it would be more surprising if something DIDN'T happen.
There is an English review
7. Trinity x Calamity ~Midara na Shitsuke to Owaru Sekai~ トリニティ×カラミティ～淫らな躾と終わる世界～[200424] Escu:de 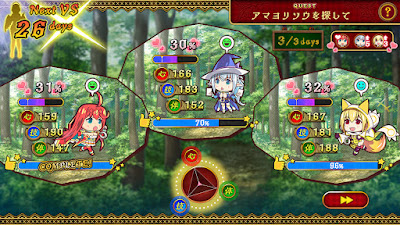 This world is sentenced to end by its angels. On the behalf of the Queen, main character goes on a mission to overthrow the angels and save the world. He needs to train three prominent students to use their powers correctly and develop an anti-angel force.
SIM
8. Silverio Ragnarok シルヴァリオ ラグナロク [200424] light 1 2 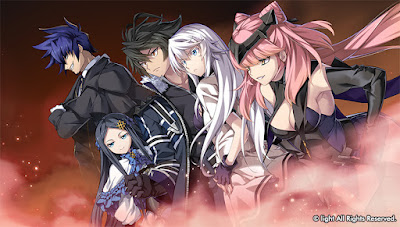 "Silverio Ragnarok" is the third and final installment of the "Silverio Saga" series.
The fierce battles between cool superhumans and beautiful battles between fascinating characters have captured the hearts of many fans to date.
This is a story of fate, demise, and hope as the "Godslayer Ragna" and her partner "Hikari" fight to the death to overthrow the gods who rule the people with their overwhelming power.
There are English reviews
9. Ryuusei Pendulum Heart 流星ペンデュラムハート [200424] CHAOS-L 1 2 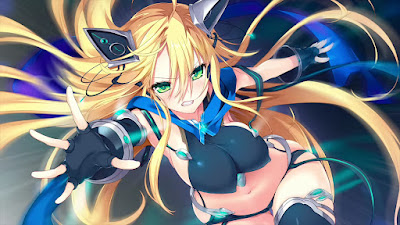 A storm brews on the horizon as Umi, a normal student, sees himself embroiled in a conflict of galactic proportions, facing the suspicion of the Galactic Police and Don Dokgar’s encroaching menace. Watch as he uncovers his past, alongside Alyssa of the galactic police, and goes from puny zero to galactic hero in this sweet space adventure.
Earth is home to a special source of energy, and because of that, a criminal organization called Crime Nebula tries to conquer the entire planet to take this energy for themselves. Umi (the protagonist) is a boy that was abandoned by his parents, and his dad was the best investigator of the galactic police, ever. One day, Umi meets Alyssa of the galactic police while she’s on a mission to fight the Crime Nebula on Earth. However, when Umi finds Alyssa, she’s in a tight situation. Umi helps Alyssa by using this special source of energy that Crime Nebula seeks. Apparently, Umi has a vast amount of this energy.
Game is localized and has English reviews