Jump to content
If I choose between indi touching crap, a lolicon moege, a twisted nukige , another mimikko moege and a single heroine nukige, what would entail the least cringe... there aren't good choices here, so I clench my teeth and call Kamisama no Shippo ~Etogami-sama tachi no Ongaeshi~ VN of the Month. What a wicked start of the year... Micchi does not mind this choice and also suggests Amairo Chocolata and a  fandisc
1. Prison Princess プリズンプリンセス [200130] qureate 1 2 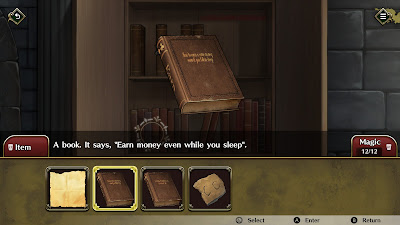 The continent of Maygard.
The peace and prosperity brought about by the two kingdoms of “Aria Zaza” and “Zanji Zed” lasted countless years.
That golden era is now facing its downfall.
The Demon King, released from his seal, has turned our continent to a sea of flames.
As cities were invaded one after another, a man appeared carrying the blood of ancient heroes… Oh Brave Hero.
During his journey, the hero was met with grave misfortune and perished.
The Demon King’s minions snuck into the capital cities of the two kingdoms to kidnap their precious princesses. All hope seemed to have been lost…
However, it seems our hero is not wholly dead after all.
Even as a spirit, the hero is determined to remain in this world, and has set off to save the princesses from danger.
Now nothing more than a phantom, can the hero succeed in rescuing the kidnapped princesses?!
Interactive game that's hardly a VN is released in English and has English reviews
2. Amairo Chocolata あまいろショコラータ [200131] Cabbage Soft 1 2 3 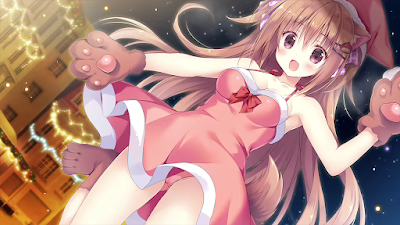 Yuzuki came to the town of Yuunagi as the leaves were starting to change colour. The first person he met was a cute cat-eared waitress, who was handing out pamphlets on the street.
“T-This is Cafe Setaria. Please come in!”
When he was led into the cafe by the waitress Chieri, the other girls there also had animal ears. Seeing his wondering look, they worriedly asked him:
“Could it be… that you could see these ears?”
They explained that they were actually hybrid beasts whose ears and tails cannot be seen by normal humans. After learning about their secret, he started working at the cafe with them, while being both shocked and impressed at the differences between them and humans.
Game is localized and has English reviews
3. Sarute サルテ [200131] Soiree 1 2 3 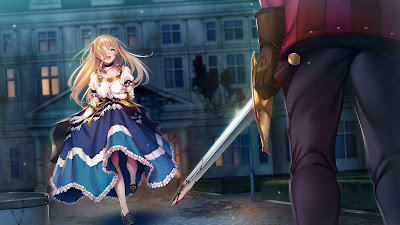 “Life is a tragedy when seen in close-up, but a comedy in long-shot.”
At the end of a journey of blood, despair, regret, and madness— a stage perched on the razor's edge dividing life and death.
With no audience to cheer, at a jester's direction, Salthe performs her past.
To learn the reason for her death.
To return to the world of life.
Each scene is full of scorn and mockery,
she writhes and struggles, through to the end
of the tale of Salthe's life—a comedy——
Game is localized and has English reviews
4. Kamisama no Shippo ~Etogami-sama tachi no Ongaeshi~ 神様のしっぽ ～干支神さまたちの恩返し～ [200131] DESSERT Soft 1 2 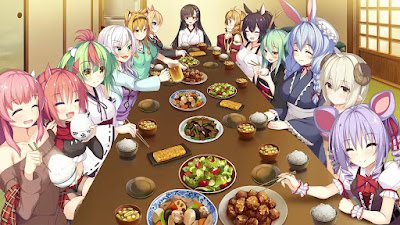 In the remote village of Tenbu, watched over by the gods, lies a shrine where the twelve zodiac signs are enshrined. Akinari is a young man who had been taken in by the Asatsuki family that currently runs the shrine when he was a baby. He secretly possesses a mysterious ability: he can understand what animals say. Since he likes animals more than others, he used this power to enjoy his life every day.
However, his everyday life changed one day after he casually inserted a precious orb into a mysterious stone slab in the shrine’s storehouse. The statues of the twelve zodiac signs suddenly vanished, and were seemingly replaced by twelve girls, the Etogami. They began living together after an unexpected turn of events, and he became good friends with them due to his innate love for animals.
Renge, his childhood friend and the sole daughter of the Asatsuki household, wished for everyone to gather around dining table, which was too big for just the two of them. Akinari always wanted to have family to call his own, so he decided to welcome the twelve of them as family. This is the beginning of a wondrous fairy tale with the twelve zodiac signs.
There are English reviews
5. Kamikura Hina no Himitsu ~Gohoubi wa Watashi no Karada♪~ 上倉雛のヒミツ ～ごほうびは私のカラダ♪～ [200131] Astronauts: Comet 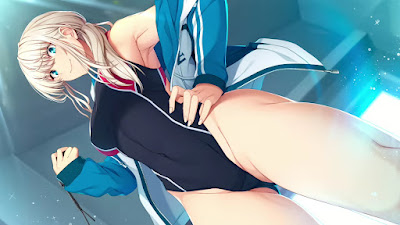 Makoto is on the university swimming team, but he can’t seem to better his time. He discussed with his coach and the reliable club leader, and they determined that it wasn’t a physical or mental problem. However, they were unable to figure out the underlying cause.
An important swim meet was fast approaching and he was feeling the pressure that he would be a burden for the team. However, he was not alone; his senpai and club manager Hina was always there to cheer him on. She knew about the anguish that he was going through and wanted to help him somehow. She took advice from many people and thought hard about a surefire plan, and…
“I’ll let you touch my breasts if you clock a good time♪”
Makoto was taken aback by the half-joking proposal, but agreed to it since he was running out of options. What will be the end result and what will happen to their relationship after this wild idea?
Another kinetic nukige