Jump to content
Musicus! is the only game I can point out. Micchi lists all of Aikotoba , Cafe Stella to Shinigami no Chou , Animal☆Panic and Suzukuri Karin-chan
1. Shin Sakura Taisen 新サクラ大戦 [191212] Sega 1 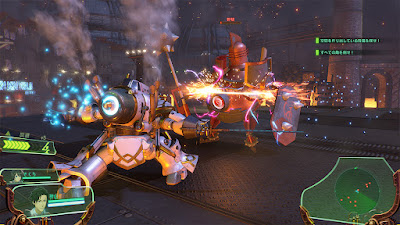 The stage is set in a steampunk version of 1940s Imperial Tokyo.
Only a short while ago, a cataclysmic event destroyed the Imperial Combat Revue of Tokyo, the capital's global defense force stationed at the Imperial Theater. Now home to the Flower Division, an inept rookie squad who also strives to impart hope on the citizenry with their theatrical talents, the theater has fallen on hard times and risks closure. It's up to Seijuro Kamiyama as the captain of the new Tokyo revue to lead his squad and restore the Imperial Combat Revue and the theater back to their former glory!
With the help of the revue's five colorful performers, he must rise to the challenge of competing in the Combat Revue World Games, protecting the inhabitants of Tokyo and getting the theater back on track.
Action is localized and has English reviews
2. Musicus! [191220] Overdrive 1 2 3 4 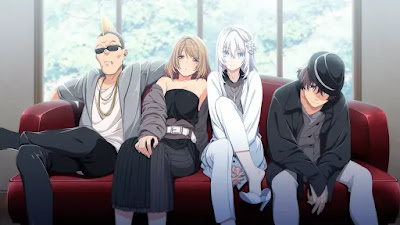 Kei used to attend a famous high school with aspirations of one day becoming a doctor like his parents, but he stopped for a term due to certain reasons and is now studying part-time. While his journey had become more difficult, it was still possible to get back on track. However, after meeting many different types of people that he had not previously encountered and realizing that there was so much in the world that he did not know, he began to question what future he truly desired.
After receiving a prize from a city-wide competition for a short story that he wrote, he was asked by Yagihara, the president of a music production, to accompany their band on their upcoming tour and write a report about the event. The band was Kachoufuugetsu, which once performed on the big stage. Its leader Korekiyo is quite a peculiar fellow and talked at length about how music was pointless and good for nothing. Even though Kei was perplexed about Korekiyo, he was taken away by the band’s music when he heard it for the first time.
A few days later after that memorable first live, Kei found out that they were disbanding. Unable to accept the sudden news, he approached Korekiyo many times to convince him to change his mind, but no argument could sway him. Instead, Korekiyo asked him:
“How about you play rock in my place?”
Game is localized and has English reviews
4. Wabisabi わびさび [191220] Le:CODE 1 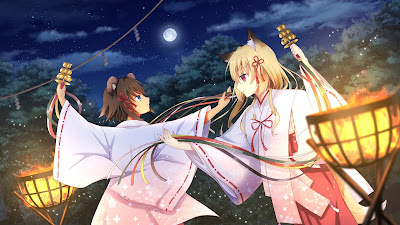 The summer blue sky over a verdant mountain village. Across endless rice fields as far as the eye can see,
A refreshing breeze blows through.
“Welcome home!!”
Kousuke comes home from studying at an art college in the city,
and there to welcome him are adorable and kind goddesses who love him dearly.
Feelings and emotions come together,
and grow like budding leaves
as this gentle and warm story begins.
Game is released in English and has English reviews
5. Animal☆Panic あにまる☆ぱにっく [191220] Lump of Sugar 1 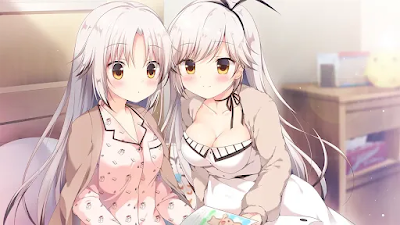 There is a ‘Wishing Crystal’ in the fairy world which can grant any wish. The fairy Nyaron stole it for himself, but he carelessly broke it and the fragments scattered to the human world. The Fairy King summoned Nono to head there to recover the fragments.
One day, Masato and his imouto Yuna picked up a strange jewel and was attacked by Nyoron, who tried to steal the shard from them. Nono rushed to their aid, and after Yuna transformed as instructed by Nono, they were able to fight him off and seal the fragment. Afterwards, Nono asked for their help in capturing Nyoron and gathering the remaining pieces, and Masato decided to lend a hand to Yuna, who had readily agreed.
They began the search with his classmate Shiori and Yuna’s friend Hinata, but Nyoron and his new allies stood in their way. Who will gain control of the Wishing Crystal?
Lots of moe, not enough story, and all the resolutions happen in the real world, anyway.
6. Café Stella to Shinigami no Chou 喫茶ステラと死神の蝶 [191220] Yuzusoft 1 2 3 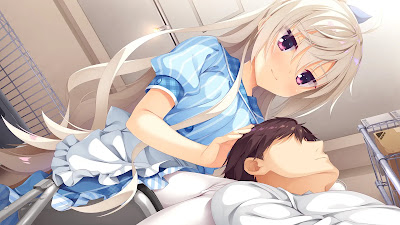 Takamine Kousei was living a carefree college life until, one day, he tragically died in an accident. But then, the bizarre happened: Takamine Kousei opened his eyes again. And what's more, when he woke up, it was the morning of the very day he had died. He proceeded to relive the same day, unable to grasp the reality of his situation. Kousei soon realized that his previous experience was not some prophetic dream, nor was he experiencing deja vu; everything was taking place the exact same way.
Overwhelmed by fear due to the unbelievable situation he has found himself in, he came back to the place where he had died. Then, at the moment of the accident, Kousei met a death goddess accompanied by a talking cat. The death goddess informed him that he has not yet avoided his death. In order to escape his grisly fate, Kousei must assist the death goddess with her work. And naturally, this means the opening of a café together.
By rewinding the world, Kousei may have overcome his fate for now, but can he overcome the certain death his future holds for him? This is the story of one man's love and his defiance of the world and his own fate... maybe?
There are English reviews
7. Shiny Sisters シャイニー・シスターズ [191220] ensemble 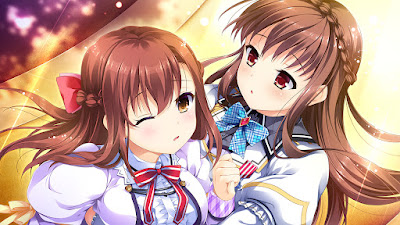 The cross-dressing protagonists met each other at an informal social gathering attended by the ojou-sama schools.
While not knowing that they are all guys, they felt a strange affinity with each other.
This development was amusing to Yuuki’s master Ran, so she plotted to make them into an idol group and have them perform at an upcoming event in town.
After some initial confusion about the sudden idea, they all ended up agreeing due to varying reasons.
Will they be able to become idols while keeping their true gender a secret!?
I'm not commenting this
8. Kazura Uta 葛唄 [191227] Bayanaka 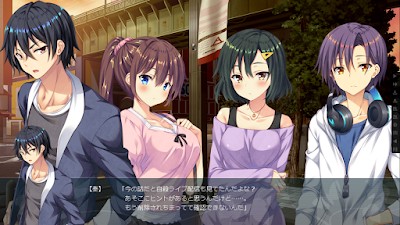 When you hear it, you die --
After a group of girls jumped from the school room, a gruesome investigation starts to unfold. There's a website that's been going around SNS that plays a certain video...
...And if you hear the song on the video, well...
Doujin that could be called all-age if not for all the disturbing gore content it provides
BLOCKED