What a great way to start this blog, using a recent example to showcase just exactly why some anime are a mistake.

The company that brought you amazing shows such as Hunter x Hunter, Death Note, Hajime no Ippo, Nana, Chihayafuru, etc. is the company that one day probably went to a mexican restaurant, ate some expired tacos, and in the process of expelling all the dejects from that dinner, Mahou Sensou came to life.

I do not understand how anyone managed to look at this finished product and thought "Wow! This is going to be a hit!" Yeah, right, a critical hit in my brain cells, that's what.

The show starts off pretty normally, our protagonist, Takeshi, and his fake girlfriend, Kurumi, are just wandering about when out of nowhere a random girl appears collapsed on the floor (you know an anime will be great when the first scene is like this).

Being the selfless protagonist Takeshi is, he brings the girl, Mui, to the infirmary.

And these were the greatest and most well written moments in Mahou Sensou.

Yep.. after this point we're going to be scraping the bottom of a dirty toilet, be prepared.

When this girl they found collapsed, Mui, wakes up, she proceeds to shoot Takeshi with her magical gun. You know, as a greeting. Perfectly normal.

But wait, that's not all, after shooting Takeshi, guess what happens? He turns into a magician!

That's right folks, hitting someone with magic in this universe means they turn into a magician. I know it sounds unbelievable to some, but I promise you, for the life of me, I am not kidding.

In the Mahou Sensou universe, if I shoot a magical fireball at your face, instead of burning you to cinders, you will be turned into a fucking magician.

And they explain this like it's normal, they literally throw a huge flashback on how magic works and how there's an alternative universe for magicians and stuff and how the magicians have to keep their identities a secret.

But if you can turn a person into a magician just by shooting them in the face, why not turn everybody in the world into one!? It sure doesn't seem like magic is a big deal if you can just transmit it like it was ebola.

At this point, I'm already left facepalming and wishing I had never pressed play in this anime, but we're just getting started here.

So of course, after this, random magicians appear and they try to kidnap Mui.

And Takeshi somehow manages to be a pro at using his magic and kicks their butt.

In the process his fake girlfriend is hit with magic and she also turns into a magician.

We're then treated to an explanation on the different types of magic in the Mahou Sensou universe, most of which are completely retarded, but the ones that are relevant here are Takeshi and Mui's magic, Acceleration magic, you know that kind of magic that does the thingy.. just kidding I have no freaking clue what kind of magic "acceleration" is supposed to be, nor do they ever explain to you, so good luck coming up with theories. And Kurumi's magic, corporal magic. Say the word "corporal magic" in your head 5 times and then imagine what kind of powers it brings to its user. If you guessed "boob growth", you're right! Of course there'd be a magic type just for the sake of PLOT, no anime is complete without it amirite?

Once all the explanations are over, Kurumi and Takeshi transfer to the magical academy in the magical universe. Yep, because parents never ask why you're suddenly transfering to a magical school. And this is where the "journey" in Mahou Sensou begins.

Most of the events in the anime are pretty irrelevant and just involve the characters practicing their magic in contests and stuff.

Takeshi's best friend, Kazumi appears later on because he also got shot in the face with magic. Boy being shot with magic really is popular huh?

His magic type is fire, which he never manages to use properly and just ends up blowing himself up. Useless best friend character: check!

But that's not all, his little sister also randomly appears at once point because she was hit by her brother's magic.

At this point I'm starting to feel like the whole "magic is like ebola" plot device only exists for the sake of introducing new characters.

Magicians also have to have a proper device they can use to cast their magic.

In Takeshi's case, he gets this mystical cursed sword that's rumored to have immense power (of course no one took it before that).

And needless to say this sword has a little girl spirit dwelling in it, which Takeshi conquers in his dream, making the sword officially "his".

He even names the girl/sword, and she is never seen again in the anime, ever.

Talk about caring for your sword, Takeshi. She let you be her master you heartless bastard, at least give her some attention.

And then we're treated to more retarded romantical conflict between Takeshi, Kurumi and Mui and just a whole bunch of other BS.

We then are shown a supposedly important competition between the academy students in which they have to perform great and exciting tasks like escaping a maze.. yayyy....

Of course in the middle of this the academy is attacked by our main villains.

Our group of friends manages to escape the maze immediately in the process (the anime literally just cuts off and they're outside the maze now, talk about skills!) and then fights the villains.

Of course the teachers, who are all supposed to be pro magicians, just sit around and say it's impossible to save them unless they reach the goal, talk about safety first.

A couple of battles later everyone's safe and stuff.

After this, our group of friends goes on a journey to save Mui's brother who's part of this faction of magicians that's trying to create a giant magical warfare (used the title, roll credits). There's nothing much to this, they just manage to rescue him by themselves from a supposedly terrorist group, no biggie right?

Then out of nowhere we're introduced to Takeshi's brother who's now ALSO a magician after being hit with magic (can't forget to remind the viewers that magic=ebola). And needless to say he is part of the villain's group and he hates Takeshi and is jealous of him having a girlfriend. So naturally he kidnaps her and kicks Takeshi's ass, laughing in his face like a true scumbag. The show tries really hard to make sure you hate him.

Of course soon enough Kurumi is saved and everything's good.

In the meantime the great war ensues in the real world, a plot to unite the magician's world to the human world, because it's much more effective than just shooting every human in the face with magic, gotta make sure we destroy everything right?

Oh and I forgot to mention, Takeshi's mom is also a magician, and Takeshi himself trains with her after this.

So yeah, magic is not transmitted by genes, but by shooting someone in the face.

We're almost done, hang on to your seats.

At this point you're already bleeding through your eyes and wondering when this show will finally end. But you're finally greeted with war.

Finally this anime will stay true to its name and turn into a legitimate magical warfare right..? Right.....?

Well, if you consider flashing lights in the sky to be "warfare" then I guess so.

The whole "war" is just Takeshi and his brother fighting. In the process of this fight his brother stabs Kurumi and then wheeps over it like a baby.

And then, out of nowhere, the academy principal appears, does some crazy magical spell bullshit and turns time back and Takeshi and his brother are in the magical academy 50 years ago.

And then.. the anime ends.

Yep... that's it. That's the ending, there's nothing else.

You go through 12 episodes of absolute garbage only to be greeted with a cliffhanger.

You don't know what happened, there's no explanation, no nothing, it just ends on this note.

And thus, you can finally lay this anime to rest, forget it ever existed and rub some lemon in your eyes to cleanse them.

You know, I'm going to contradict myself here a little.

I know I mentioned you're entitled to your opinion and all. But seriously, if you find this anime to be above average in any way, shape, or form, I definitely believe you either 1) Only watched one or two anime in your entire life and they were probably boku no pico and Skelter Heaven, or 2) You're blind.

I do not know or understand the concept or even the theory that says a human being can enjoy this anime. It is beyond all logic and reason.

This is not "so bad it's good" level, this is absolute well dwelling dog feces tier level anime.

Nothing decent happens in the anime.

The "warfare" are just flashing lights.

The main conflict between Takeshi and his brother is retarded because the brother is a piece of whimpy shit.

Kurumi servers no purpose and is just there for showing her boobs and then dying.

And the whole setting is just stupid from the very beginning.

This anime is absolute trash. There are no redeeming qualities and I hope to god that if anyone ever reads this, that they do not try to subject themselves to the horrors of this show.

The final veredict for Mahou Sensou, on the vomit scale, is an 8/10: vomited my own lungs 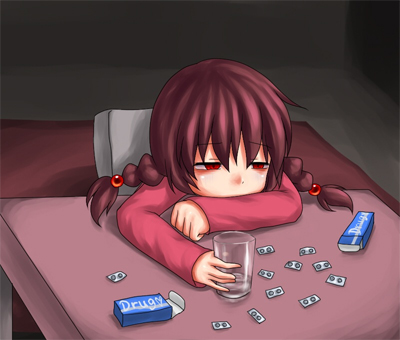