Jump to content
Foreword: I'm a fan of DnD , Wizardry 8 and Japanese Wizardry series, so I could not just pass by Dungeons & Daimeiwaku. As for Mareni writing, it's a stamp of minimally acceptable quality although without a normal story it can easily go astray.

Synopsis:
In the world of sword of magic, expert miners discovered an underground labyrinth in a remote area of the continent. “The Abyss” is very huge inside, full of monsters and traps. However, it was rumoured that ancient treasures lie deep inside its depths and adventurers from all over came to challenge the dungeon. Among them is the young and foolish samurai Shouran, and his party consisting of the sexy but problematic alchemist Nicolite, the aggressive M ninja Hakumeimaru and the expressionless mysterious archer Kurozuka.
Youtube: https://www.youtube.com/playlist?list=PLwGwDxf37gEl3UABPvr6h2gRVAj86RTei
Character Design rating: 6/10
Protagonist rating: 6/10
Story rating: 5/10
Game quality: 6/10
Overall rating: 6/10
I keep choosing Mareni works for review, but this must be the first time when I deny it of being a masterpiece if we don't count Albatross Koukairoku that I tried some 3 times and that I absolutely hate. And the reason is that Dungeons & Daimeiwaku is closer to Albatross Koukairoku than anything else I read from Mareni. But that is probably the best rated and most praised game of Mareni, so let's sort it out. 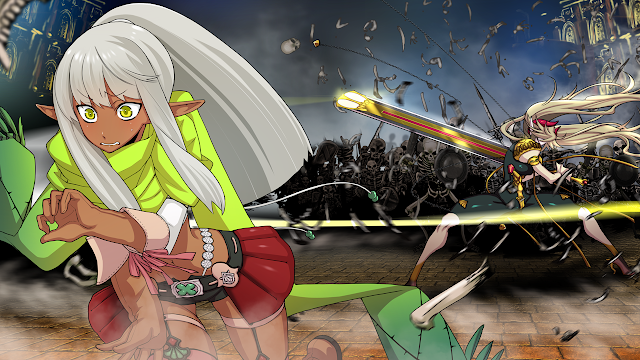 Common route is usually the best part of the game, but not in this game, apparently. It's a terribly long line of encounters with different monsters and several bonding events in-between. Archer Kurozuka is the only proper fighter, but she joins only at the very end of the common route, so fights in the common route are a mix of running , fighting due to emotional overflow, some tricks, luck and intervention of higher forces. This is supposed to be the part to pour in all the humor available, but I did not like humor in the game. There aren't normal jokes with structure and punches. "Humor" here is achieved mostly through the same means as in Albatross - abnormal illogical development, denying laws of ethics, forgetting to fill plot loopholes, fumble way of doing things and just straightforward cheating. I tried to catch a glimpse of normal humor, but at best it's some phrase thrown during ambush while inventing a way to deal with it, although no punch ever follows. 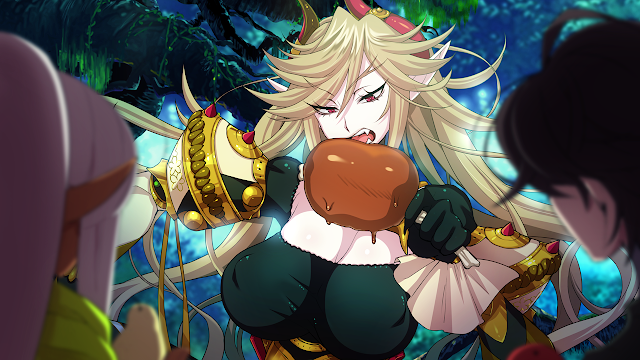 Then three individual routes follow... and those are pretty horrible. Hakumeimaru just deals with her sister and is plain unfinished. Nicolite in her route deals with her (different) sister, and even though this route has a logical ending, it's so quirky that I it might as well be unfinished as well. With boobs in clothes as route main heroine, this route is also destined to become most etchy and it even hosts a 3P h-event. Kurozuka archer is rather serious in comparison, so her route is most action-packed, but it's still fighting only a sub-boss, so it does not feel goal-setting or meaningful on a large scale. There is also a True route available from the menu after clearing individual routes, but I almost missed it because game has zero walkthroughs on Japanese sites, just insane. And Chinese sites give choices for individual routes, but absolutely forget to mention the True route in any way. So this true route is actually the best part of the game as it becomes rather serious and does not need to waste time on trash mobs, so development finally acquires some meaning and some kind of whacky resolution.

As a result, playing this game for the story is a waste of time. Trying to find humor is pointless. I did not feel DnD or Wizardry spirit in here, sadly, as without proper seriousness game becomes a mere parody. After all, there is no aim and no super-antagonist to keep the parts glued. So I have trouble defining reasons to play this game. I rated Astelight trilogy as masterpiece because it was fast-paced chaotic quirky development. But Dungeons & Daimeiwaku has a single setting that it needs to maintain, just like Albatross Koukairoku. So it becomes just a themed collection of quirks, weirdness , gimmicks, erotics and parody. I could finally enjoy humor and characters only in the True route to an extent. It mends things to a certain degree creating a plausible final impression, but when I remember the torture of Common Route and half-baked individual routes (except for Kurozuka that had its nice moments), I absolutely deny this game a masterpiece status. Without proper story, atmosphere or humor it can only appeal to niche auditory that can appreciate quirky humor and relations. 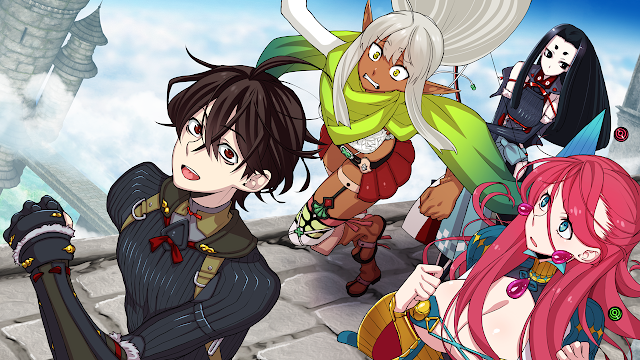