Jump to content
Foreword: It's an all-ages non-trivial setting doujin work of the best quality I ever seen by Watanabe Ryouichi. If that's not enough... 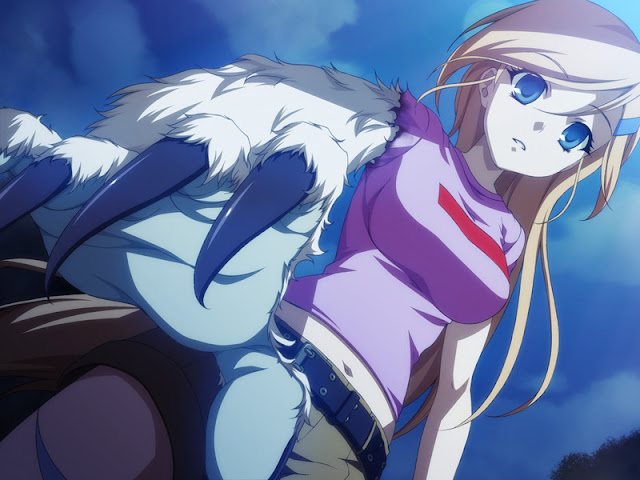 Synopsis:
1400 years ago first murderer demons get spotted
700 years ago western technologies start to get used for rebellion
500 years ago murderer demons learn to acquire human image in Transilvania
18 years ago a huge massacre takes part in Japan
10 years ago murderer demon is killed at the age of six in Japan
Nowadays.
Sakurano Mana gets worried by the murderous desire overflowing her body.
Onose Kiri is troubled about her past when she lost one hand and one leg.
Kaiho Kazuki investigates murderer demon killing at the age of six. Then Kaiho Kazuki meets these girls and other strong persons in this town full of death scent.
Youtube: https://www.youtube.com/playlist?list=PLwGwDxf37gElQGPD7Adx5vix_objh5qlr
Character Design rating: 9/10
Protagonist rating: 8/10
Story rating: 8/10
Game quality: 8/10
Overall rating: 8/10 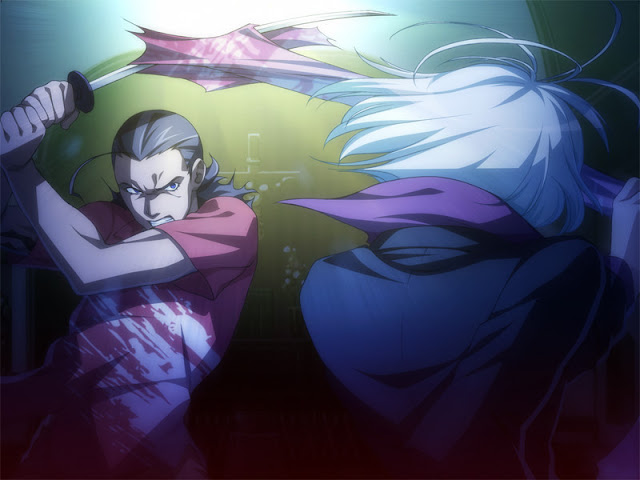 I doubt I can rate a doujin game higher than this. Voicing alone always takes away a whole score point for me, plus there are other flaws. But do flaws really impede enjoying this game? For me flaws are absolutely neglectable. I'll list them after observing the structure. There are 6 phases or Chapters each generally having multiple sub-chapters. Phase 1 presents six introductory stories from different protagonists perspective. Phase 2 gives several sub-chapters for three protagonists - Kaiho Kazuki , Sakurano Mana , Onose Kiri . Basically, it's the most action-packed phase with not always good endings.  Phase 3 presents three flashback stories. Phase 4 literally takes one minute where narrator says that there may be a better world without killings. Phase 5 basically presents same main stories as in Phase 2, but gives choices now and thus ability to see different endings, including bad ones. Phase 6 presents two side/bonus stories. With that covered it's impossible to say that Kaiho Kazuki is game's protagonist. He's merely one of protagonists, but it's just the most traditional boy character out of this colorful cast, so he's easier for reader to empathize with. 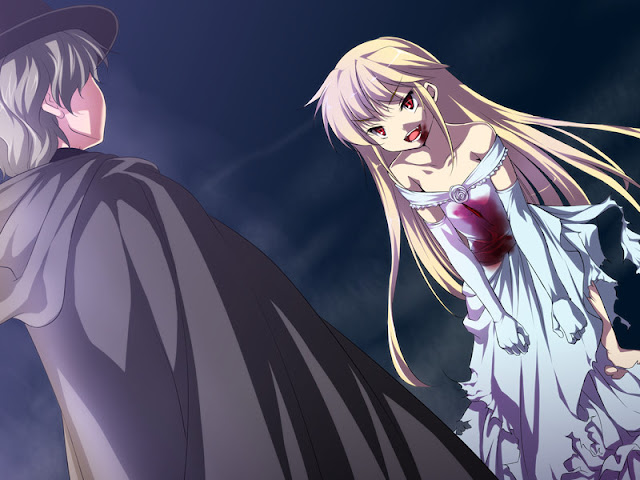 But structure does not really reveal what this game is about. First of all, it's not a battle royale like FSN or survival like Abyss although there are some elements present here as well. So what is it? Hard to say, actually. I'd determine it as unique stories of different colorful characters in the town where murders is way of life and communication rather than crime. Wow, I made it even more complex, but there are no easy answers here. There is no single protagonist and there is no single antagonist. Of course there is a mysterious organization (several, actually), but multiple antagonists show up and leave the scene. We can even theoretically say that it's a love story as I've counted as many as five couples forged. I'll undertake another attempt to explain game's nature at the final word. 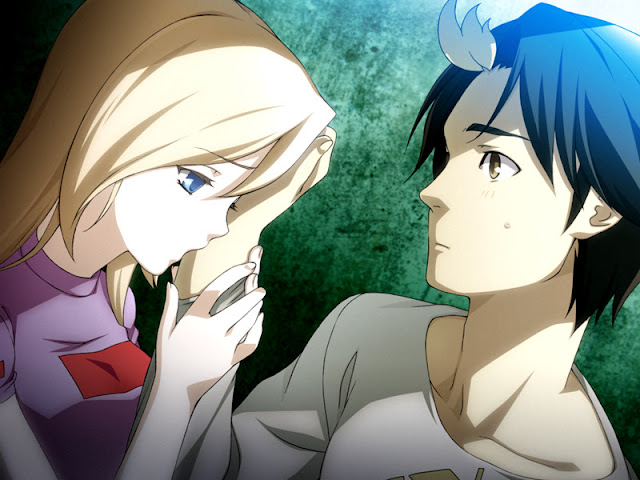 Let's numerate game's multiple flaws. I've already mentioned that there is no main conflict in the game. Due to multiple protagonists the start is very slow as we're just thrown to different character's lives without much explanation. Even later on multiple protagonists structure has its painful moments as same scenes can be shown from different points of view. Watanabe Ryouichi is wordy, and for a number of occasions I was irritated by the fact that the same thought could be repeated several times in varying phrases. Conversations take about 70% of screen time while action scenes aren't that frequent. Moreover, overall number of unique CG is around 40, so don't expect them to be used at action scenes at all. Dialogue lines have no character name or icon, and it can be a mess since it's often not clear who is talking. Can't avoid a spoiler here, but ... how should I put it... not all the dots are put in the ending. And it's not necessarily a bad thing, will try to explain in strong points. 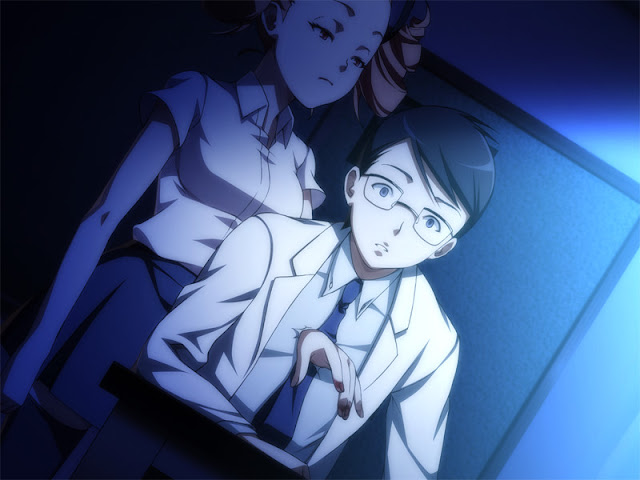 On the other hand, this is arguably the highest quality doujin game in visual novel history, four years in the making. CG quality is outstanding, character design excellent, BGM deserves a separate CD distribution. There are a lot of really cool characters, both men and women ranging from elementary school children to middle-aged persons in late 30s. And thanks to Watanabe writing, characters feel developed. It's an all-ages game, but love plays a very important role both in plot and in jokes. Author is not afraid of vulgarities, so you will see discussing of nakedness, periods, rape, pregnancy etc all the time. So it's a surprisingly adult work not suiting newcomers who will get confused by character relations, bored by lengthy dialogues and offended by lack of conflict storyline. At the same time it's not a must have work that broadens readers horizons or gives new ideas. It's just a well written story with many well written characters who live, love and fight in a different world where demonic presence transformed traditional morals. And that's exactly what I seek in art - a detailed world with the logic behind it so vivid that I'm both persuaded by it and see this exact logic determining characters' actions, not author's whim. And open ending in Indigo is a hymn to this logic. 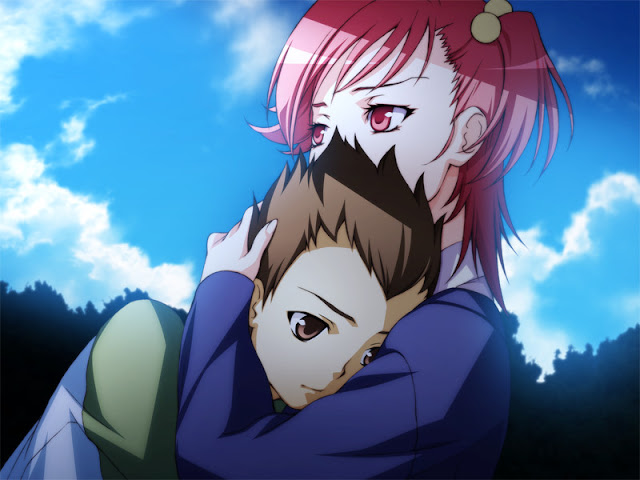