Jump to content
Foreword: It's Akatsuki Works. Do I need to add anything here? 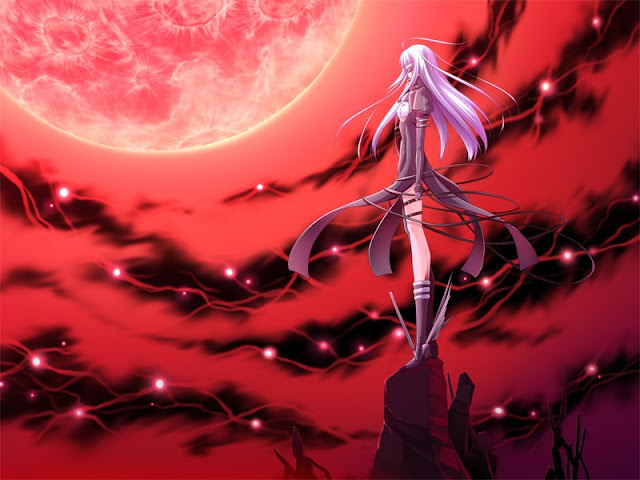 Synopsis:
Human, monsters, and beasts... The world doesn't forgive them... There is a town where mysterious cases often happen. The ones who have special ability called Enja. The origin of Enja is "devil". They get together as if led by something unseen and kill each other.
Sora is an Enja boy. He lost his parents several years ago and now lives alone. His life is full of peace, rest, and destruction. Peaceful school life with friends. Strange dreams he has every day. Battles against devils that appear in the town at night.
His "contract" leads him to a hell of sadness, fights, and carnage. He also meets some girls along the way. Love, obedience, subordination, immorality, and desire. Sora, who doesn't know how to love, is a broken human. What does Sora get, what does Sora lose through contracts with the girls? At the end of the contract, he meets the last devil...
Youtube: https://www.youtube.com/playlist?list=PLs4Gp5VU4Fv-jYx7aFo_S2dhjAFrqQIaq
Character Design rating: 9/10
Protagonist rating: 8/10
Story rating: 8/10
Game quality: 8/10
Overall rating: 8/10
Game has good English review coverage (1 2 3 4 5 6), and mine is not really needed. Still, will at least give impression, explain the score split and maybe nitpick a little. 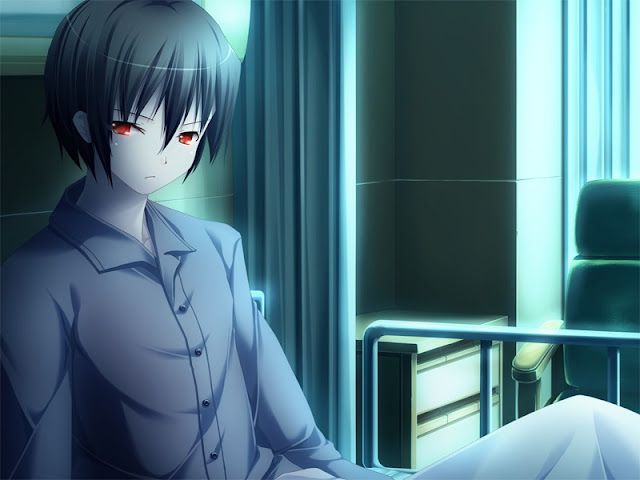 Concept is the most curious thing here as it does not really look like anything I encountered before (which is not necessarily a good thing). Can't understand anyone who'd compare this game with FSN, because the only common point is that protagonists attend school and have superpowers, but it's basically what almost every chunige has. FSN is actually an absolute opposite, because Devils Devel Concept is about a non-human protagonist involved in an eternal war between two factions of omnious moral principles. In this regard it looks like Gekkou no Carnevale or abominable Mindead Blood. But these games again can't be compared, because Devils Devel Concept MC is basically a super-entity, on an absolutely different level than anyone else. And I can't really remember similar visual novels. What comes to mind from recent anime is One-Punch Man and Overlord. But DDL stands aside even from them because Sora is basically a villain, a broken creature. He is an emotionless man of simple wishes a pleasures despite his power, just as Saitama. Both of them want to lead a quiet life and ideally not get involved in any fighting, but people around them try to motivate them to fight the greater evil. But Saitama is an otaku who joins a superhero league, and Sora is a primordial beast with lowly instincts and destruction urge. That's one huge difference that determines the whole flow of the game. 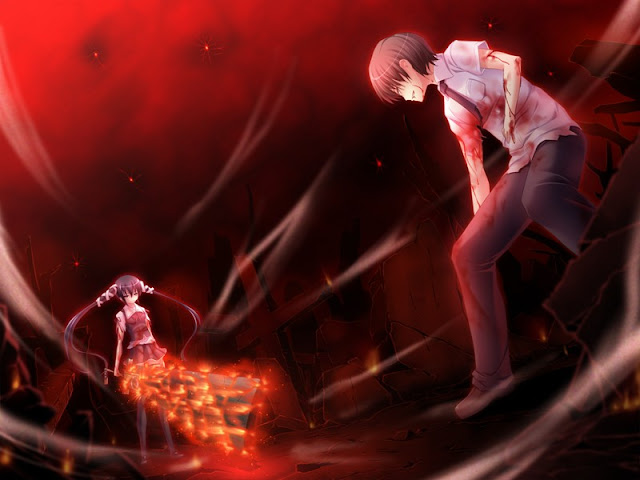 And when we speak about the flow, I always try to understand what moves the game and makes us want to read it. In this regard DDC is again something unseen before. It's not about romance, not about battles, not about daily conversations in the company of friends, not about grand mystery, not about confrontation with a big baddie, not about jokes, not about masterfully written text, not about moe, not about sex. Wait a minute... it seems that we exhausted all the possible known options. Not really, because I deliberately mentioned conversations in the company of friends, but Devils Devel Concept is about tête-à-tête conversations with various heroines, plus a bit about other things. Heroines don't really communicate with other girls in this game.  Different characters are from different strata, and explaining their beliefs to each other takes the bulk of game time. Basically all we do is learn about protagonist gradually and in each route about girl's visible side and then concealed side. All those talks seriously hurt the tempo, plus there are constantly hyperlinks to terminology that can be checked either right now or in the glossary later in the same manner as it was in Saihate no Ima and I/O. I love such info-dumping layers and they allow to tell a lot more details about the setting. With such an omnipotent protagonist fighting can't really be an option as battles end in an instant or move to spiritual world to cut all regeneration attempts of the adversary. Only exploration of the world, heroines and protagonist mysteries remain as viable options. 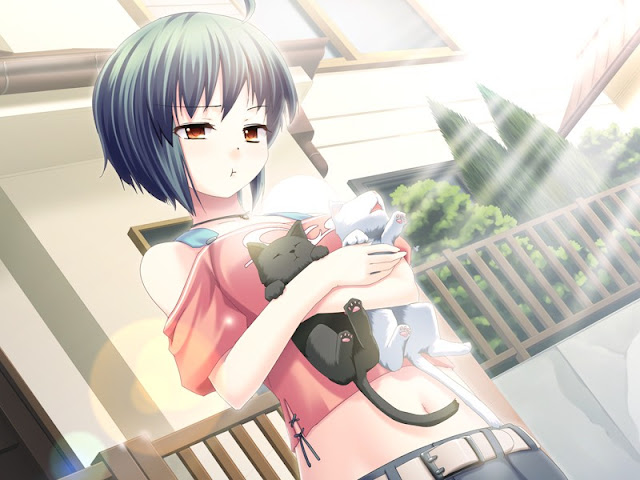 And that brings us to the most important feature of the game - protagonist. I know I already took a lot of time with him, but now we need to assess his moral side as the whole game assessment depends on whether you like protagonist or not. And I don't. I absolutely understand that his unrivaled power is something very unique in the medium. I absolutely like his direct honest emotionless attitude and lack of interest in the bigger schemes. But power tends to corrupt; and absolute power corrupts absolutely. Sora is an abominable, unpleasant person and a rapist with destruction urge. His simpleton nature leads to satisfying only lowly desires - to rape and to kill. He takes what he wants when he wants. I see zero reason how such unpleasant person can be liked. And I believe that heroines to not really like him let alone love. They basically are hunters who know or guess about Sora nature, so they are sent to observe his behavior. And - as I see it - they agree to be raped just to lean to his immense powers and try to manipulate him. They may have own lowly desires awoken at times, but it's still a calculated approach deprived of any romance, at least from the start. And in this regard Mutsuki looks like the most interesting heroine. She is a cynical smoking sex-friend who does not belong to any organization and does not really need anything from Sora. Basically, she shares his outlook in many ways despite her innocent look. Oh, and since we're talking about heroines, I absolutely can't understand why Misora has the same look as Yuuga from Bokutsuba. 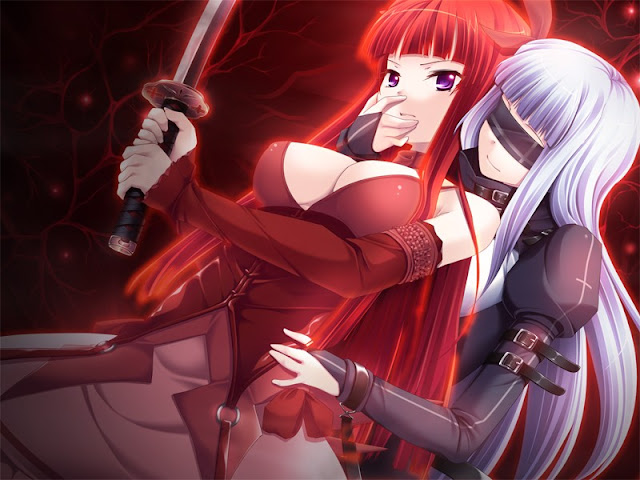 Let's talk about some technical details. Character design is mediocre. CG vary greatly by quality. H scenes look like more like animals mating. There is an abundance of blood which makes me sick, personally. Despite installing the latest 1.03 patch I could not get normal speed and instant text drawing, was way too fast this way, so had to put up with text drawing gradually, and that's bad. Battles are basically decided in one blow and concentrated in couple routes. 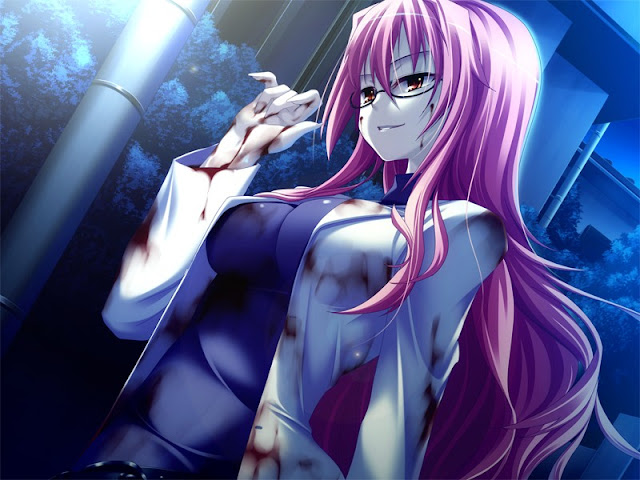 I already mentioned the good things, but to sum it up it's thoroughly developed setting and personalities of protagonist and heroines. There are a lot of interesting discussions about morality and just atmospheric decisions with different cut-ins. But outside the context and the mystery game does not really have a strong story. And that's why it tries to impress and shock with aesthetics, invincible and immoral protagonist. And the true Mia ending falls into the same category. It's the worst ending, so it can not leave any reader indifferent. Such beast as protagonist does not really deserve a truly happy ending. But did I really like this concept? I did not. The novelty, coolness and impact are great. But both Saitama from One-punch man and Ainz from Overlord are examples of how it's possible to create positive image of a super-enitity while imbuing them with same moral hesitations and adding actual intelligence. And I like both of those cases much more. 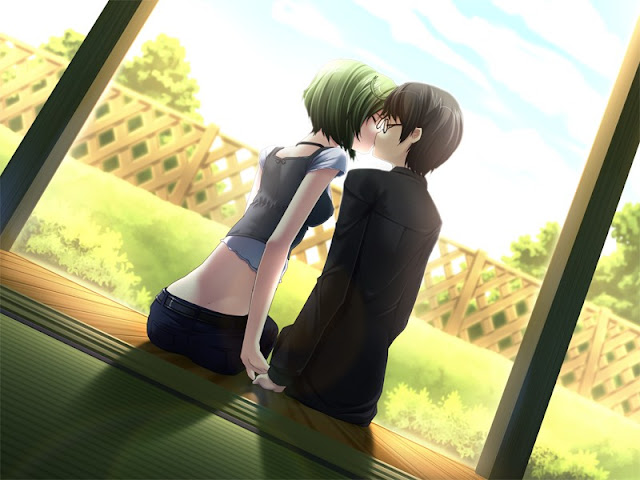