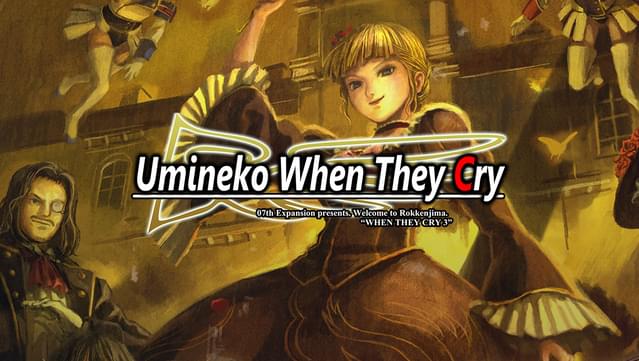 Umineko is a beast of a work that I've been putting off for many years now, probably around a decade. I first learned about it after watching the Higurashi anime back in 2010. At first I stayed away because I wasn't a fan of Ryukishi07's sausage-finger art. However these days it seems that most common ports of Umineko utilize updated art. But, that still left one other huge factor for why I was so intimidated by Umineko for so long.

The estimated reading time of both the Question and Answer arcs is around 150 hours. That's a huge time commitment, and I am not a particularly patient or fast reader. If a book doesn't grab my interest within the first couple of chapters I feel no remorse in dropping it. And I apply that same rule to everything I read or watch. So works that have slow starts but supposedly “get better, I promise it gets way better if you continue with it!”, are works I generally avoid. But hey, Subahibi proved to be exceptional and I had a hunch that Umineko would prove to be as well.

Essentially the whole coronavirus lockdown presented me with a rare opportunity to finally tackle Umineko. My last semester of Uni got delayed by over a month, and I figured if ever in my life I would have time to read Umineko it would be now. So I purchased the Steam releases of the Question and Answer arcs and installed the voice patch. Which by the way was a slight pain in the ass to do, since the voice-patch is banned in Japan for some copyright protection reasons. However using a VPN managed to solve that problem.

To date I've read the first 5 episodes of Umineko including their associated tea party chapters. Which according to Steam clocks me in at 88 hours (I wasn't kidding about being a slow reader).

I admire the balls it took for Ryukishi07 to literally take the most cliched premise of a “dark and stormy night in an isolated mansion” mystery setup, and to turn that premise so much on its head that my attention is wrapped entirely in the web of the narrative he has setup. And without being pretentious about it, Umineko makes it clear that the mystery genre, and literature in general, is something that Ryukishi07 holds dear to his heart. It is very much a love letter to the mystery genre, while also being a complete deconstruction of it.

More than that though, it isn't just the plot which is masterly crafted, but what makes it standout is that it truly fleshes out its entire cast. Characters aren't just there to be pieces in a puzzle to solve, even if at first they may all seem to be fairly generic. Gradually as the layers peel, you will see the facade in much of the interactions between the family and all the conflicting and complex motives various characters hold beneath the surface. And above all, they are all sympathetic despite being quite flawed.

If I had to pick one character in particular that was surprisingly much more complex then I anticipated, it would be the 9 year old Maria. I fully expected her to be a simple little kid character, who was there mostly to just be cute or maybe to be used for cheap tragedy. No, far from it. Even Maria has complex motives of her own that reach surprising levels of depth. And so if even the initial impression of a 9 year old can be deceptive, I think we can easily imagine that being true for the rest of the cast as well.

What I found consistently very impressive about the work, is that as I mentioned previously I am not a patient reader. I hate it when stories have segments of seemingly dull character interactions to establish build up. This usually gets me in an irritated mood where I think, “This better be building up to something great, because I'm in no mood to settle for good.” And invariably, every single time so far that Umineko ordered for my extended patience, it was rewarded well beyond my expectations.

A story that I initially found off putting precisely because of its length, is now a story I don't want to end. The irony, huh.